Bloom in tree fruits is progressing rapidly. Warmer weather and rain this week will cause disease problems.

Last week began cold with radiation freezes over the weekend and early in the week. The coldest morning was Tuesday, April 28, 2015 when temperatures dropped below freezing again. There has been very little damage from spring freezes this year. The current weather pattern setting up for the next two weeks makes freezes unlikely and the statistical risk of a hard freeze down to 28 degrees Fahrenheit is less than 10 percent in most areas.

Lows last week were generally in the 30s and the highs rose steadily through the week from 50 to the 60s. The weekend was warm with highs near 80, causing rapid plant growth. Today, May 5, will be cooler and rainy, with highs near 60. This week’s high temperatures are forecast to rise into the 70s and 80s with lows in the 50s. Storms moved through the region early Monday. There is a chance of showers today and Wednesday, May 6, and again over the weekend.

Wet conditions during bloom can cause disease infections in blooming fruit. Sandy soils are generally dry and soil temperatures rose above 50 F.

Bloom is moving quickly due to the warm weather. Wet conditions will require protection for fruit leaves and flowers. Michigan State University Extension reminds growers to avoid pesticide sprays to blooming crops when bees are foraging in the field - even fungicide sprays. Avoid spraying during the midday; apply sprays at night or during the early morning or evening hours when bees are not active.

Warm rains during bloom can lead to blossom brown rot in stone fruit. As leaf tissue becomes available, warm and wet conditions are conducive to bacterial spot, a disease of peaches and plums. Fruit development is still spread out across the region with southern orchards more advanced than sites to the north. Areas closer to Lake Michigan have been much cooler than inland areas and development is visibly delayed close to the lake where temperatures have been much cooler.

Apricots are in the shuck. There was damage to apricots by a freeze Friday, April 24, 2015, but live fruitlets are easy to find.

Peaches are in bloom to early petal fall. There was little if any damage to peaches from last week’s freezes. Bloom makes it easier to determine the crop potential and winter cold injury. Elevated sites with good air drainage fared better this year than last. Crop potential is better in southern Berrien and eastern Van Buren counties this year than in 2014.

Oriental fruit moth adults were caught in low numbers two weeks ago and counts jumped over the warm weekend. Larvae typically hatch about 10 days after biofix for this insect with normal temperatures. Growers using copper to suppress bacterial spot should reduce the rate as more leaf tissue is exposed. Now is the time to look for western flower thrips flying around and damaging nectarines in the shuck.

Tart cherries are in full bloom. There is little damage to the flower buds from last week’s freezes. Tart cherries are tolerant to copper and copper applications may help reduce bacterial canker and cherry leaf spot in cherries. Like sweet cherries, bract leaves can be infected at bloom.

Apples of the early blooming varieties such as Zestar and Ida Red are in king bloom to full bloom, depending on the site. Bloom has begun in most varieties and full bloom for most varieties will be later this week. The Cornell Carbohydrate Model for the Benton Harbor Enviro-weather station predicts high stress (low available carbohydrate) during bloom due to the cloudy forecast. If thinning sprays will be applied during bloom, consider normal rates of NAA at 7 to 10 ppm or MaxCel at 75 to 100 ppm. A detailed description of the Cornell model and thinning strategies by MSU Extension fruit educator Phil Schwallier can be found at the MSU Apples website posted as “PGR’s and Thinning Strategies.” 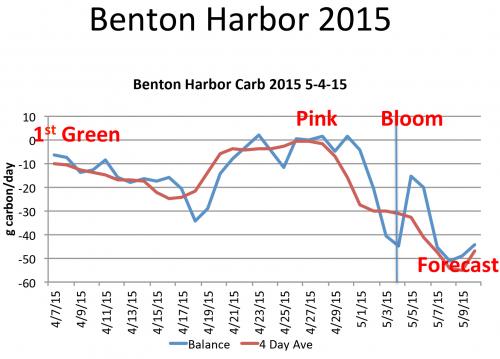 Growers need to protect against apple scab infections. The first symptoms should be appearing in the area this week and growers should scout for symptoms. Warm rains during bloom can lead to fire blight. Unless bloom has been open for several days, it appears that the Tuesday rain will not be a fire blight infection due to the cooler weather. MSU Extension suggests growers use the Enviro-weather apple blossom fire blight predictor to assess their risk of fire blight infection during bloom. Warmer temperatures later in the week make infection likely if we get rain. Kasumin now has a national label for fire blight control during bloom. The optimum timing for Apogee application to reduce shoot growth and fire blight spread is petal fall from king bloom.

Pears are in full bloom and pear psylla are flying. Pears are also susceptible to fire blight and pear scab. Most pear growers use the Enviro-weather apple pest models to predict pear diseases. Kasumin is now registered for use in pears for fire blight control during bloom.

Grape buds have burst in most areas. Concord shoots are about an inch long and leaves will soon spread out away from the stem. Growers need to focus on early season disease control. At this time, the primary diseases are powdery mildew and Phomopsis. MSU Extension advises growers to apply a protectant fungicide or biological material in vineyards affected by Phomopsis during the first few inches of shoot growth to prevent build-up of lesions on new shoots. Many growers time their first fungicide application to when the flower clusters are first exposed to ensure good coverage of the flower clusters with protectant fungicides. 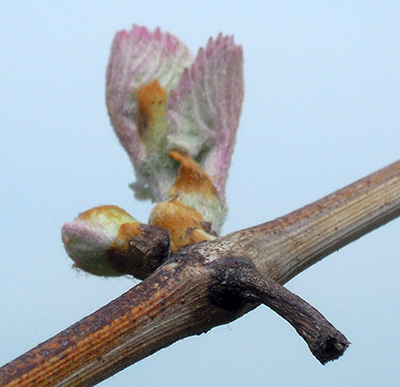 The primary Concord bud in this picture has burst revealing the leaves. The secondary bud is still in late or full swell and will open soon.

There is a lot of powdery mildew inoculum in the vineyards from last fall. Powdery mildew cleistothecia produce spores above 50 degrees with any rain. Powdery mildew susceptible varieties are likely to have infections on unprotected shoots. Grape flea beetles and climbing cutworms can still cause damage in swollen and opening buds. With warmer temperatures this week, grape growth will be accelerated and these pests will no longer be a concern.

Blueberry flower buds are at bud burst to early pink bud. Leaves are unfolding and shoot growth has begun. With the rapid growth, winter injury is easier to assess and many growers report less injury than last winter. This winter, there was significant damage to flower buds in colder sites. Flower buds injured by winter cold expand slowly if most or all the flower buds inside are dead and then open to reveal an empty bud. Leaf buds are unfolding and it appears there is much less injury to leaves and shoots than last year. Older, weak wood that was not removed after last year’s injury shows poor growth and damaged fruit buds Younger, more vigorous canes do not show as much damage.

Green leaf tissue is susceptible to mummy berry shoot infections. With the dry weather, mummy berry trumpets have been hard to find. Early shoot strikes should be visible soon after the shoots start growth. These early shoot strikes are easily blown off the bush by windy conditions. Wet conditions during pink bud also favor twig blights such as phomopsis and anthracnose, which makes fungicide applications especially important this week. See “Protect against blossom blights in blueberries” for more information.

Blueberry bloom has begun in southern Berrien County and bloom should spread quickly across the region with this week’s warm temperatures. With bloom, mummy berry control shifts to controlling the fruit rot phase of the disease. 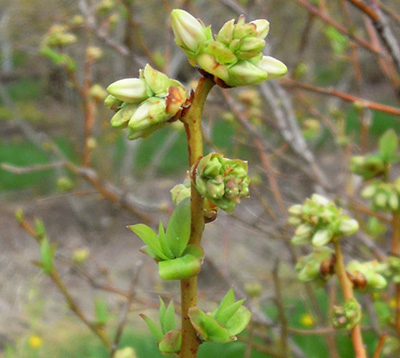 Bluetta is one of the first blueberry varieties to bloom.

Bramble buds have burst and leaves are unfolding. Winter injury to floricanes is becoming easier to assess. Most blackberries were severely damaged by the winter and only buds from below the snow line are growing while the rest of the floricane is dead. Red raspberries are less affected, but damage varies from moderate to severe in the same planting. Black raspberries generally look good. Primocane shoots were damaged by last week’s freezes and show little growth with the cool, dry conditions we have experienced in the past few weeks. With rain and warmer weather, primocane growth should take off.

Our next Monday fruit IPM meeting is May 11 at Fruit Acres Farms, 3452 Friday Rd, Coloma, MI 49038 at 5 p.m. Two Michigan pesticide applicator recertification credits will be given for these meetings.