Last week was a little warmer. Highs were in the upper 70s and lower 80s with lows around 60. Showers crossed the region Tuesday and Wednesday (Aug. 6-7). Rainfall totals for the past week varied from 2.5 to 0.25 inches with an average of 1 inch. Stations north of I94 received an inch or more, while those in Berrien County received much less. Monday, rain again crossed the region with heavy rain falling north of I94. Totals from Monday’s rain were about 2 inches.

Potential evapotranspiration varies during the season and the weather. Evapotranspiration (ET) is falling as the days get shorter and cooler. On sunny days in August peak values are about 0.17 inches per day. On cloudy days, values are between 0.1 and 0.05 inches. Potential evapotranspiration for the week was about 0.9 inches. So, many areas north of I94 have adequate or excess soil moisture, but sandy sites in southern Berrien County are short. We will see cool conditions and then a warm-up into the weekend with highs in the 80s and lows above 60. Temperatures next week will be in the mid to upper 80s. The week is forecast to be dry following Monday’s rain. We are about a week behind the five-year average. Check your local weather station and conditions at Enviro-weather.

These cooler temperatures are ideal for spotted winged Drosophila (SWD) and growers should expect increasing pressure from this pest. We are catching SWD in almost all our Michigan State University Extension monitoring traps. Some traps are catching only a few males and females and others are catching dozens -- even hundreds -- of males and females. In general, trap catch of SWD continues to increase. Growers should assume that SWD is available to attack their fruit. Japanese beetle numbers are declining. Brown marmorated stink bugs are being found in low numbers in southwest Michigan, generally close to streams. We recommend monitoring for this insect on field borders close to woods, especially close to water sources. San Jose scale has been found on the fruit. The flight of the second generation started approximately July 22 in the Fennville area, with new crawlers expected 500 DD51 later or approximately Aug. 25. Tree fruit leaf samples for foliar nutrient testing are generally taken by mid-August.

Peach harvest of Redhaven, Starfire, Starfire, PF15A, John Boy and other peaches ripening just after Redhaven is underway. Quality is generally very good. Brown rot, Rhizopus rot, and peach scab are easy to find. Brown rot control programs and possibly insect control of spotted wing Drosophila will need to be ramped up as we approach harvest. Oriental fruit moth trap catches have been steady at a relatively low level.

In sweet cherries, sprays to control cherry leaf spot are still needed. Growers can use post-harvest materials to protect the leaves.

Tart cherry growers should continue to protect against cherry leaf spot. Pruning can be done on mature trees, but should not be severe to avoid devigorating the trees. Post-harvest pruning from now to early September will reduce bacterial canker infections that are favored by spring pruning under cool, wet conditions.

In plums, harvest of Castleton, NY6, Ozark Premier, and Fortune is underway in area orchards. Preharvest drop of plums has been significant in some orchards. Low boron levels, particularly in sandy sites, can contribute to fruit drop, but foliar and soil tests should be used to verify that there is a deficiency before applying this nutrient. Brown rot controls need to increase as fruit begins to color and ripen.

Apple harvest of PaulaRed, Mollies Delicious, and Zestar has begun in some early sites. We are less than a month away from Gala harvest in some sites and growers should check the dates for applying Retain for stop drop control for the apple varieties they grow. Make sure you do not miss the application window (30 days or less). Sooty blotch and fly speck symptoms are now being reported on apple fruit. Trap catches for oriental fruit moth and codling moth are generally low; however, a few sites are in their third week of high codling moth trap catch, indicating a strong flight at these sites. Apple maggot fly catch has been reported for three weeks in some area orchards. Growers who are participating in the Brazilian apple export program are reminded that the insecticides approved by this program as effective against maggot do not include many of the newer compounds. White apple leafhopper, European red mites, green apple aphids, and wooly apple aphids have built to noticeable levels in a few orchards.

In pears, Growers should monitor for Fabraea leaf and fruit spot, and pear psylla activity. Pear fruit should be protected against second generation codling moth.

In grapes, clusters are tight and veraison has begun in early varieties such as Fredonia and Marquette. Growers should check crop loads in their vineyards and make adjustments to their crops before veraison. Crop loads in vineyards are very high this year. The normal harvest tonnage of Concords in Michigan is about 7-8 tons per acre. The current tonnage of grapes will not make minimum sugars in a cool year like this. We are behind the five-year average for growing degree days, about in line with 2008 and 2009. Growers examine their records to see what tonnage they have been able to ripen in the past, sample a few blocks and adjust crop loads accordingly.

Trap catches for adult grape berry moth (GBM) increased moderately this week in the vineyards we monitor to an average of 6 to 8 adult moths per trap In several vineyards we monitor, percent GBM-infested berries was 5-10 percent, According to the grape berry moth model on Enviro-weather, we reached 1620 GDD base 47, the start of third generation GBM egglaying, last Thursday and Friday (Aug. 8-9) for Benton Harbor and Berrien Springs and Saturday, (Aug. 10) at Lawton. At Fennville, the 1620 mark for GBM third generation is expected today or tomorrow. Growers should be checking bunches for feeding by larvae. Keep track of GBM pressure in the vineyard by checking 100 clusters on vineyard edges and woody borders and 100 clusters in the vineyard interior to determine percent infestation and to monitor whether or not GBM is moving into the vineyard interior or remaining along the edges. The treatment threshold is 6 percent. Look for webbing on berry clusters and hollowed out berries. At this stage, single GBM larva infests multiple berries. SWD number in traps bordering vineyards continue to climb, but there is no risk to grapes now because the berries are too hard for the flies to penetrate. Powdery mildew was found mainly on foliage in a Concord vineyard we monitor, but there was some on the fruit. Heavy morning dew provides good environmental conditions for downy mildew. The weather pattern that created these conditions is expected to persist for another week or so. Downy mildew can easily become very serious at this time of year. There is considerable downy mildew in the unsprayed sentinel plots we monitor.

In blueberries, mechanical harvest of Jersey and other late varieties is continuing. Elliott (the latest harvesting major variety in Michigan) harvest is underway signaling that we are past the peak of the harvest and the season is winding down. The 2013 crop has been excellent with good fruit size and quality. Growers need to protect against blueberry maggot and spotted winged Drosophila (SWD). Blueberry maggot is being trapped across the region and most SWD traps are catching flies. Larvae of both flies have been found in fruit in the field and also harvested fruit. Growers who are not monitoring for these pests should be applying controls. Michigan State University Extension’s SWD website has management tips as well as weekly reports on SWD trapping across the state. Many growers have shortened their harvest interval to reduce the amount of ripe fruit in the field. Under these wet conditions growers should also apply controls to suppress anthracnose and alternaria fruit rots.

In strawberries, protect the new leaves from potato leafhoppers to prevent this insect from stunting growth. Everbearing strawberries are producing berries and should be protected from SWD. Infested fruit tends to have a soft spot on one side and very small, white maggots may be present.

In brambles, blackberry and fall raspberry harvest is underway. Spotted wing Drosophila is the most important pest to manage now. The Spotted Wing Drosophila Management Recommendations for Michigan Raspberry and Blackberry Growers has been updated. Growers should be monitoring their raspberry and blackberry plantings for SWD and applying insecticides. Sanitation is very important for managing SWD. Our trap catches in and around brambles are very high. We had several SWD trap catches last week in brambles with hundreds of flies. Frequent picking of ripe fruit and removal of overripe fruit is important to keep SWD populations in check. One sign of infestation in raspberry is a red staining on the receptacle when the raspberry is picked.

Another pest to watch for now is two-spotted spider mite. Two-spotted spider mite activity generally picks up when plants are stressed by heat and drought. Multiple applications of insecticides to control SWD can lead to mite population explosions. Insecticides to control SWD in brambles and other insect problems should not be applied while bees are actively foraging.

Symptoms of damage to blackberries that suggest injury caused by a tiny eriophyid mite called redberry mite have been reported by a southwest Michigan blackberry grower. Fruit infested with this mite are inedible and can’t be marketed. They inject a toxin into the fruit as they feed. Some drupelets ripen normally and some remain red and hard. The cultivar ’Chester’ is particularly susceptible, as are other late maturing varieties such as ‘Triple Crown’, ‘Navaho’ and ‘Apache’. Redberry mites overwinter under bud scales on blackberry canes and move to flowers in the spring to attack developing fruit. Sunscald could be confused with injury from redberry mite, but affected drupelets are white, not red, and eventually become dry. Sunscald is caused by high temperatures and intense afternoon sunlight. Once redberry mite symptoms appear, treatments are not effective, but applications can be planned for the following year. For plantings where this pest has been a problem, a delayed-dormant application of sulfur or lime-sulfur after budbreak in addition to an application when shoots are 2 to 6 inches long has been recommended in the Northwest states. Research at University of California has shown that several applications of horticultural oil spaced 2 to 3 weeks apart after green fruit stage may also provide control with less injury to fruit yields than sulfur or lime-sulfur applications. If you have not used horticultural oils on your blackberry plantings before, it would be prudent to test it on a small portion of the planting first, to check for possible phytotoxicity. Oils should not be applied within one month of a sulfur application to avoid phytotoxicity. Oils should also not be applied when temperatures exceed 90 degrees, which limits their use in high tunnels. 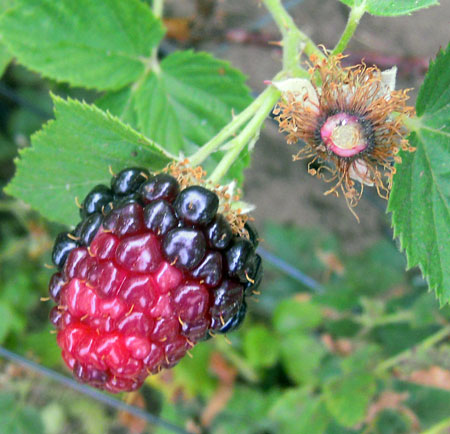 Uneven ripening of drupelets is a symptom of redberry mite.