Bloom opened in apricots and plums during the warm weekend. Avoid spraying open bloom during the middle of the day. Insecticides should not be used during bloom.

Fruit development in southwest Michigan seemed to be close to normal by the calendar. Buds are steadily blooming with warmer weather. Last week was cool with high temperatures in the 40s and rain for the first part of the week. Friday, April 7, and the weekend were clear and warmer, with Sunday’s highs in the 70s. The warm weather caused early bloom to begin in stone fruit. Lows Saturday, April 8, were generally near freezing. Some sites got down into the low 20s. We do not expect any significant damage from this freeze.

Another inch or more of rain fell across the region and many rivers are at flood stage. The ground is saturated and water is standing in many low areas. The weather for this week should be warm with highs in the 60s and lows in the 40s. Rain is likely this coming weekend.

Most fruit crops are at bud burst. It would require cold temperatures into the mid-20s to damage the tree fruit flower buds. See “Freeze damage depends on tree fruit stage of development” by Michigan State University Extension for more information.

Warm temperatures over the weekend moved tree fruit development quickly. Reports of significant damage to fruit crops in the southeastern U.S. have given special importance to maintaining the Michigan crop this year because of the prospects for higher prices. Low temperatures on the morning of March 14 caused some damage, the most to apricots. Rainy and windy weather has growers struggling to apply oil sprays for control of San Jose scale and mites.

Apricots are at full bloom to early petal fall. Normal apricot bloom in southwest Michigan is about April 17, so we are about one week earlier than normal. 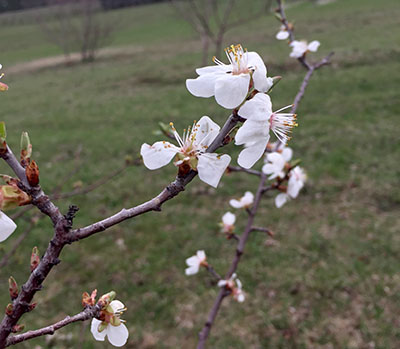 Apricots are at full bloom. Bloom is scarce due to the loss of flower buds from the March 14 freeze. 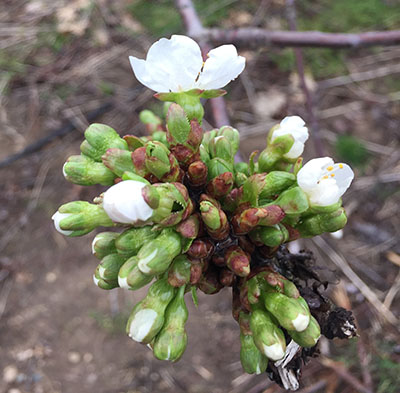 Sweet cherries are at white bud and flowers are beginning to open.

Japanese plum varieties such as Shiro and Vanier are at popcorn to full bloom. European plum are at bud burst. Damage from the March 14 low temperatures seems minor. We have moved into the black knot infection season when overwintering knots release spores and infect succulent green twigs of the current season's growth. Use fungicides to protect against infection occur during wet periods with temperatures above 55 F, especially from white bud to shuck split. Prune out black knot and dispose the knots by burning, in addition to fungicide treatment.

We have had two or three significant scab infection periods over the last two weeks, depending on the site. Scab ascospores were detected in low numbers during these rain events. Heavy rains, windy conditions and poor driving conditions due to saturated ground have made it difficult to maintain fungicide coverage.

Powdery mildew management on susceptible varieties typically begins at pink with the most susceptible period right after petal fall, which coincides with rapid leaf growth of trees. Only new, unfolding leaves are susceptible to infection.

Pear fruit buds are at bud burst, depending on the site and variety. Fungicide treatment for pear scab is ongoing. Some growers have applied multiple dormant and delayed dormant oil treatments for pear psylla adults flying during the warm hours of the day. Psylla have three to four generations with egglaying and nymph hatch from late March to the end of June.

Grapes have not yet begun growth. At some warm sites, bud swell has begun in Concord. The risk of freeze injury to buds is low.

Blueberry flower buds are beginning to burst. Leaf tissue is emerging from the uppermost leaf buds of the shoot. This exposed green tissue is susceptible to mummy berry shoot strikes. Growers should be scouting for mummy berry trumpets in areas where mummy berry has been a problem. Many growers have applied Sulforix and other lime sulfur products to suppress early season diseases.

As flower buds open in these wet conditions, they are susceptible to phomopsis infection, which can lead to phomopsis shoot blight. Most fungicides for mummy berry shoot strike should also be effective on phomopsis. When the rains and flooding in blueberry fields subside, it will be time to apply spring herbicide treatments to reduce weeds in the bush rows.

Strawberry leaves are emerging and flower trusses are visible in the crown. Over-wintering mulches should be removed and raked between the rows. Growers are looking at early-season herbicides to control overwintering weeds.