Everything seems to be blooming at once! Avoid using insecticides during bloom.

In southwest Michigan, trees and shrubs have leaved out rapidly with the warm weather of the last two weeks. Last week was warm with high temperatures in the 70s. Passage of a cold front on Friday, April 21, dropped highs to the 50s with scattered rain showers. Friday and the weekend were warm with clearing skies. A mild freeze Sunday morning, April 23, caused little damage. Most temperatures stayed above 30 degrees Fahrenheit.

Cherries, peaches, plums, pears and apples are blooming. The difference in fruit development as you move north or south in the region is less pronounced. Little rain fell across the region last week. The ground is still moist and water is standing in wet spots, but sandy soils are drying out and field crop farmers have begun working these fields. Soil temperatures are in the 50s and weeds and turf are growing rapidly.

The weather for this week should be warm with highs near 80 on Wednesday, April 26. Widespread rain is likely Thursday with unsettled conditions through the weekend with highs in the 60s. Low temperatures are forecast in the 40s and 50s. We are seven to 10 days ahead of the long-term average for bloom dates in southwest Michigan. The spring leaf index has us about 14 days ahead of normal. In some areas, we are past the 50 percent chance of a hard freeze. For the next several weeks, temperatures below freezing are possible but less and less likely. The Midwest Regional Climate Center posts information on spring and fall freezes.

Warm temperatures have moved tree fruit development quickly. All stone fruit are blooming. Apple and pears are also blooming. The forecast for the end of the week is for wet rainy conditions and growers should prepare to control diseases. Apply controls in the next few days to protect the blossoms through the weekend and beyond. Since we have open bloom, it would require cold temperatures below 30 to damage the tree fruit flowers. See “Freeze damage depends on tree fruit stage of development” by Michigan State University Extension for more information.

Warm rains during stone fruit bloom pose the risk of brown rot blossom blight. The passage of a cold front on Thursday will lower temperatures, but there does not appear to be much risk of a freeze.

Apricots are emerging from the shuck.

Peaches and nectarines range from bloom to petal fall. Flower density is relatively high. Oriental fruit moth biofix based on trap catch at Trevor Nichols Research Center is April 24, 2017. Growers using pheromone disruption for the first generation of oriental fruit moth should have the disrupters in place. Insecticides such as Rimon aimed at egg hatch are timed for approximately 100 degree-days (DD) base 45 F from biofix. This will be approximately the end of April for the Berrien County area. Insecticides targeting larvae are timed about 170 DD45 following biofix. 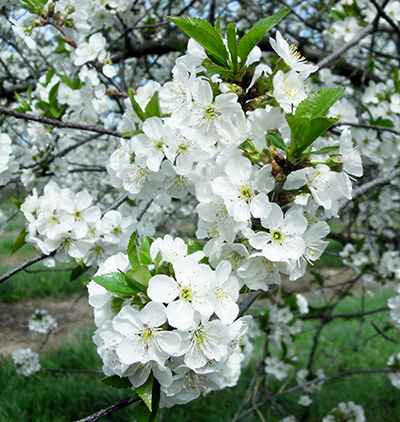 Japanese plum varieties such as Shiro and Vanier are at petal fall. European plums are at full bloom. We have moved into the black knot infection season when overwintering knots release spores and infect succulent green twigs of the current season's growth. Use fungicides to protect against black knot. Infection occurs during wet periods with temperatures above 55 F, especially from white bud to shuck split.

Early developing apple varieties such as Zestar and McIntosh are at full bloom. Golden Delicious is at king bloom. Other apple varieties range from pre-bloom to king bloom. Scab ascospores trap catches are continuing. No apple scab symptoms have been reported. Scab symptoms from the April 10-12 infection period should be visible on the leaves. 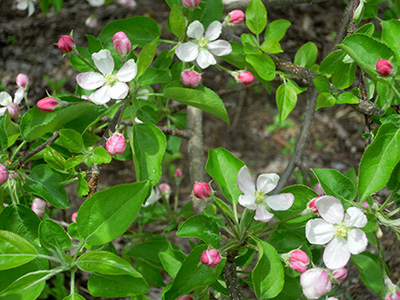 Golden Delicious are at king bloom. The central flower is first to open and is potentially the largest fruit. It is called the king bloom. Photo: Mark Longstroth, MSU Extension.

Growers should be scouting for powdery mildew. Powdery mildew management on susceptible varieties typically begins at pink with the most susceptible period right after petal fall. This coincides with rapid leaf growth of trees. Only new unfolding leaves are susceptible to infection.

High temperatures in the 70s and 80s and moisture were sufficient for the Maryblyt model for fire blight to predict infections on April 15 and 16 for orchards in Berrien County coming into bloom on April 14. At that time, only a few early varieties such as Zestar had open bloom. This infection may not apply for most orchards in the area, which did not have open bloom. Growers will want to use the predictive fire blight model on MSU Enviroweather to determine their risk this upcoming week during bloom. 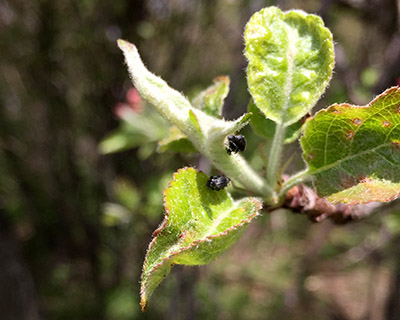 Pears are in full bloom to early petal fall. Fungicide applications for pear scab are ongoing. During bloom, the risk for fire blight increases with warm and wet conditions. Pear growers should use the predictive fire blight model on Enviroweather to determine their risk. The infection period for fire blight mentioned in the apple section may have been significant for pear varieties susceptible to this disease. Treatments for pear psylla are applied post-bloom and target rapid shoot growth and succulent leaves.

Grapes are at bud burst in Concord, Niagara and very early varieties such as Marquette. Most hybrids and vinifera wine grapes are at various stages of bud swell. This is the last week where copper or sulfur products should be used, and only in vineyards where the buds have not yet opened. This application reduces this season’s disease pressure of downy mildew, black rot, phomopsis and powdery mildew. On sites where grape flea beetles and climbing cutworm are present, expect feeding to continue.

Growers should scout sites with a history of bud damage. Look for blackened or hollowed out buds and treat if above thresholds of 2 percent for cutworm and 4 percent for flea beetle. As buds burst and shoot growth begins, grapes become very susceptible to freeze injury. See “How cold can grapes go?” on the MSU Extension Grapes Weather and Climate page for more information. Growers should prepare to make the first application for phomopsis in vulnerable varieties when the leaves fold back from the clusters.

Blueberries are at pink bud and the early blooming varieties are starting to open in warmer sites away from the lake. Leaves are starting to unfold on the new shoots. Mummy berry trumpets are up and growers should scout in areas where mummy berry has been a problem. Apply early season fungicides to protect against mummy berry shoot strike now before the wet weekend and bloom. Now that the flowers are beginning to open, be prepared to use sprinkler irrigation systems to reduce damage to the flowers if a frost or freeze is predicted. See “Using Sprinklers to Protect Blueberries from Spring Freezes” by MSU Extension for more information. 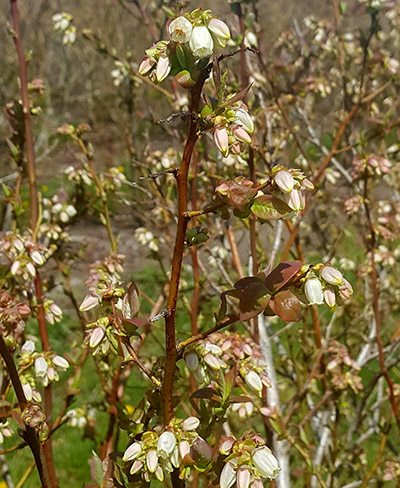 Bramble leaves have unfolded on the floricanes. Dormant pruning should be finished and lime sulfur sprays for anthracnose should be on. Scout for orange rust; spray to reduce its spread should be applied now.

Attend a blueberry pre-bloom meeting in Van Buren County on April 27 from 5:30-7:30 p.m. at Haven Harvesters in South Haven, Michigan. There will be talks on early season insect, disease and weed control, frost control and irrigation by MSU extension fruit specialists and educators. An online registration form will be available soon. This meeting is sponsored by Haven Harvesters LLC, New Age/Landmark Laboratories and Bronsink Equipment. The sponsors are providing a light supper at the beginning of the meeting.

Our next Monday fruit IPM meeting is Monday, May 2, at Fruit Acres Farms, 3452 Friday Rd, Coloma, MI at 5 p.m. Two Michigan RUP applicator recertification credits are available at these meetings.

Agricultural Weather Forecast for May 11, 2021