Peach harvest is winding down. Apple harvest picking up with Gala harvest.

Last week was cool. High temperatures were in the 70s with lows falling into the 40s and 30s. Scattered showers brought rain showers several times during the week, but significant rain fell only on Tuesday, Aug. 22, and Thursday, Aug. 24. Rainfall totals for the week ranged from a trace to half an inch.

Rainfall has been very variable this year. Total rainfall in southwest Michigan for August ranged from 0.75 to 3 inches of rain. Last week’s potential evapotranspiration was about 1 inch of water. The season’s total demand since April 1 has been about 24.5 inches and the season’s rain across southwest Michigan averages almost 14 inches. Some areas are very dry and drought symptoms in unirrigated woods and fields are common.

This week will be cool with highs in the upper 70s. There is little chance of rain after Tuesday, Aug. 29, until next week. We continue to be about a week ahead of normal.

Peach harvest is winding down with many wholesale growers finishing up with PF23, Glowingstar, PF28-007 and Encore. Other late varieties coming up include Autumnstar, PF-35, PF Legendary and Victoria. Fruit color and quality continues to be good.

In general, bacterial spot problems were relatively light this year in southwest Michigan. Oriental fruit moth trap catch numbers are still significant in some orchards. We are in the third generation oriental fruit moth flight. 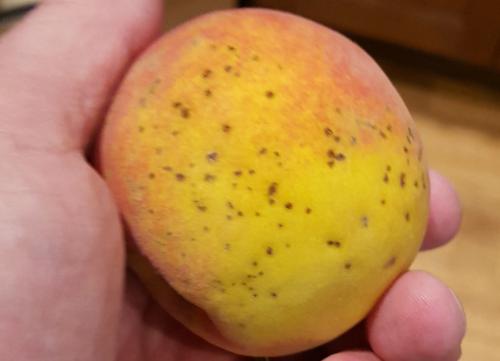 Spots from bacterial spot. These cosmetic spots do not affect the flavor of the peach.

Suspected spotted wing Drosophila (SWD) larvae were found in mature, apparently sound peach fruit. Growers may need insecticides close to harvest, especially where SWD populations are high due to nearby brambles or other hosts. This would be a bigger problem for peaches picked more mature for direct sales.

In cherries, defoliation from cherry leaf spot is a serious problem in some orchards. This reduces reserves from next season and winter hardiness.

Apple fruit size is down in some sites due to the dry conditions. The effects of the May 8 freeze have been apparent for a while with a light crop in the bottoms of the trees and a good volume of large fruit in the tops of the trees. Harvest is quite low in these orchards due to spring freeze losses.

McIntosh and Gala harvests are underway in the area. Growers are harvesting smaller Jonathan apples for taffy apples. We are testing apple maturity using Irrigating is necessary in Michigan blueberries