Summer insect pests are becoming real problems for many growers.

Last week was warm and humid, with highs in the 80s and lows in the 60s. Scattered showers moved across the region Thursday, Friday and Saturday (July 20-22). Most of the rain fell in the southern tier of counties, which received 0.5 to 0.8 inch of rain. The more northern counties received less rain, between 0.2 and 0.3 inch of rain.

Heavier soils are moist and sandy soils are generally dry. Rainfall this season has been very uneven. Comparing this season’s rain across southwest Michigan shows an average of over 12 inches; some site have had less than 8 and others more than 15 inches of rain since April 1. Last week’s potential evapotranspiration was about 1.4 inches of water for a season total of 19 inches since April 1.

This week will start cool with less humidity and highs in the 70s. Warm conditions will return with highs in the 80s and a chance of showers late Wednesday night through Thursday. The weekend should be cool and dry. We are about a week ahead of normal for heat accumulation and crop harvests for this date.

The summer generations of many insect pests are emerging or damage is appearing in orchards. Japanese beetles are a problem in some locations. San Jose scale  on the fruit are causing red spots. Brown marmorated stink bugs are still nymphs and not yet flying. Brown marmorated stink bug damage to crops is still very low. Review the in sect trap catch at Trevor Nichols Research Center. Young plantings on sandy sites may need irrigation again soon. Leaf samples for foliar tissue analysis should be collected from mid-July to mid-August. Tissue samples should be sent to A&L labs.

Quality continues to be good with only minor disease problems and some bird peck issues on dark skin varieties. To increase fruit color, do some light summer pruning one to two weeks before harvest on varieties needing more color. 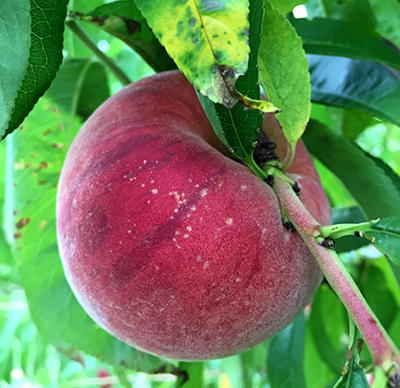 Cherry harvest has ended in southwest Michigan. Cherry leaf spot is a serious problem in some orchards. Chlorothalonil can be used after harvest to help suppress cherry leaf spot with low risk of resistance buildup by the

Apple maggot is a summer apple pest, which emerges after a rain and attacks apples. Apple maggot trap catch numbers are up. The insecticides you are using need to control all the insects attacking your fruit. 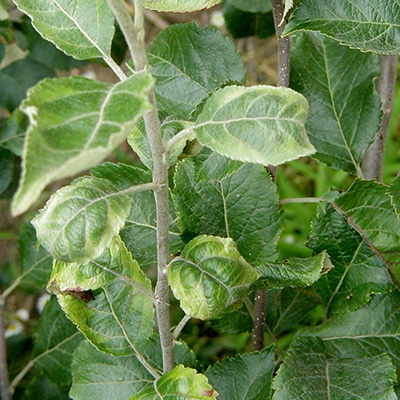 Grape clusters have filled out. Downy mildew and powdery mildew incidence is still low. A few infections of phomopsis and black rot are present. Berries are resistant to new disease infections until veraison. Early varieties should begin veraison in the next week or two.

Generally, grape leafhopper in juice grapes and potato leafhopper in wine grapes are not a problem. Japanese beetle numbers are low. We are still several weeks away from the beginning of third generation grape berry moth egglaying. Most vineyards have set fruit despite the frost damage this spring. A significant portion of this fruit is being borne on secondary shoots.

SWD catch is higher this year than previous years. SWD will likely be a problem after veraison, especially in wine grapes. Hang traps for SWD and treat after veraison if necessary.

Blueberry harvest is in full swing with the second pickings of Bluecrop. Hand harvest and machine harvest are moving quickly. Some growers are using machines because of a shortage of pickers. Fruit quality is variable as growers struggle to remove ripe fruit quickly.

In the last few weeks, SWD numbers have really jumped. We are seeing SWD numbers as high as we normally see in August. Tight spray schedules are needed to control SWD. Protecting ripe fruit is very hard. Even with excellent insecticide programs, the longer ripe fruit stays in the field, the more likely it is to be attacked by SWD.

Tight harvest schedules reduce the time ripe berries are exposed to SWD. Do not neglect fungicides. Fruit rots such as anthracnose and alternaria have been reported. Phomopsis canker and cane collapse is easier to find. In the next month, collect leaf samples for foliar tissue analysis. Foliar analysis give a much better picture of the nutrition in the plant. Soil sample reveal what is in the soil, but not what the plant needs to optimize growth and yields.

Bramble harvest continues. Summer red raspberries are abundant and harvest will continue for several more weeks. Black raspberry harvest is ending and blackberry harvest is beginning. The high SWD numbers have put real pressure on raspberries and blackberries one of their favorite hosts. Protect fruit from SWD. See MSU’s recommendations for SWD control in brambles for more information. One of the best defenses is to pick as often as you can, removing ripe fruit as quickly as possible. 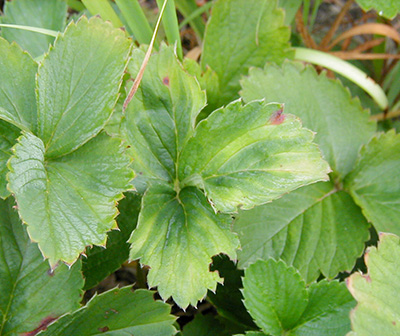 Potato leafhopper damage to strawberry leaves. Note the yellowing of the leaves where the leafhoppers have injected a toxin into the leaf. Photo by Mark Longstroth, MSU Extension.

The 28th Annual Viticulture Field Day and Steak Cookout is Wednesday, July 26. The event, hosted by the Michigan Grape Society and Michigan State University Extension, is at the Southwest Michigan Research and Extension Center.

An open house at the Southwest Michigan Research and Extension Center is Tuesday, Aug. 15, from 1 p.m. to 4:30 p.m. Project tours of vegetable, tree fruit, bramble and blueberry research will take place. There is no charge for admission, but please pre-register.

The Michigan Grape Society is hosting its next Grower Social on Aug. 16 at 3 p.m. We will be meeting the Round Barn Winery. The event includes an educational segment by MSU Entomology. Registration is $15 and includes a light supper and wine.