Tart cherry harvest has begun. Spotted wing Drosophila numbers are up and birds are a problem.

Last week was pleasant with highs falling in the 70s. The weekend was warmer with highs in the 80s. Rainfall continued to be spotty. Storms crossed the region Thursday, June 29. Rainfall was variable and ranged from less than 0.5 to over 2 inches of rain. Most areas received less than an inch of rain. Sandy soils are very dry.

Comparing the rain this season across Enviroweather stations in southern Michigan, some stations received little rain and others have a surplus. Growers with irrigation need to maintain their soil moisture. Moderate temperatures kept the potential evapotranspiration to less than 0.20 of an inch of water a day.

This low transpiration rate should continue this week with highs in the low 80s and falling into the 70s. There is a good chance of thunderstorms at the end of the week Thursday and Friday, July 6 and 7. This week will be warmer with highs in the 80s.

Last week, we accumulated 34 growing degree-days (GDD) base 42 every day and 24 GDD base 50. We continue to track about a week ahead of normal for heat accumulation for this date.

Relatively cool weather and light rains helped trees take up fertilizer, but sandy sites are generally still low on water. Japanese beetles continue to appear in more locations. San Jose scale crawlers are out, but no damage seen on fruit.

Brown marmorated stink bugs are still keeping a low profile in the area. The summer generation is still largely in the immature stage and not yet flying. Damage to crops is still very low. Review the insect trap catch at Trevor Nichols Research Center.

Peach and nectarine fruit growth of early varieties has been rapid. Harvest of PF1 and Desiree will start this week in some places. Harrow Diamond harvest is about one week away. Enviroweather's peach maturity model estimates the start of Redhaven peach harvest July 30 in central Berrien County and Aug. 4 in the Allegan area.

Oriental fruit moth trap catch is rising with the second flight. Egg hatch for the second generation began approximately June 25, about 1,125 GDD45 after the first moth catch of the overwintering generation.

Protect fruit from tarnished plant bug damage. As fruit begins to color, the need for brown rot protection increases, especially where insects have been feeding on fruit. Rotate classes of fungicides used for brown rot control to avoid resistance problems. 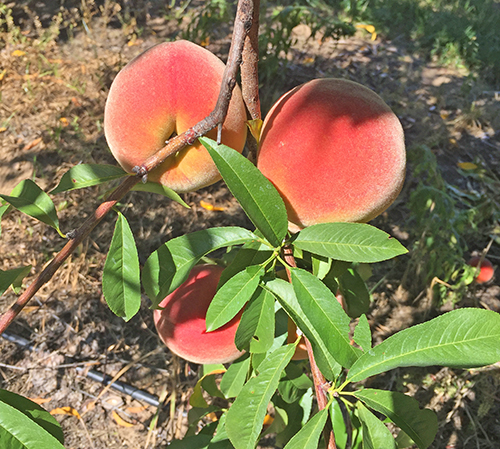 Sweet cherry harvest is in its third week for Berrien County. Bird feeding is a problem, but does not seem as bad as usual. Tart cherry harvest has begun, with some brown rot in sites with light fungicide programs. Leaf yellowing from ethephon sprays is common. Growers have had some problems with some immature fruit, so the most mature blocks are being harvested first.

Cherry leaf spot is not a problem in most orchards. Spotted wing Drosophila (SWD) numbers are up and some growers have applied insecticides to protect their fruit during harvest. This fruit fly can be a serious pest in cherries and other stone fruit. SWD can quickly explode to damaging numbers. Michigan State University Extension recommends a tight insecticide schedule of weekly sprays to protect cherries. See MSU’s “Managing Spotted Wing Drosophila in Michigan Cherry” for more information.

Plums continue to size rapidly. The area plum crop ranges from poor to fair. Early plums are starting to color. Protect fruit from brown rot and SWD. SWD has been a problem on soft plum fruit and fruit with weak sutures in previous years.

Apple fruit are about 1.5 inches or more in diameter. Continue fungicide treatment for apple scab if scab lesions are on leaves. This will protect the new leaves. Programs for sooty blotch and flyspeck management may provide some scab protection, depending on the fungicides used. According to Enviroweather's sooty blotch and flyspeck model, symptoms of these diseases are predicted to start showing up now on unprotected fruit.

Protect susceptible varieties from powdery mildew until shoot growth ends. There is relatively little fire blight this year. The second generation of codling moth should be emerging soon. Codling moth trap catches were variable last week, but seemed to rise sharply in some orchards. The second generation emerges about 1,000 GDD base 50 after biofix (first moth catch). The regional codling moth biofix for southwest Michigan was May 16 at about 250 to 350 GDD base 50. 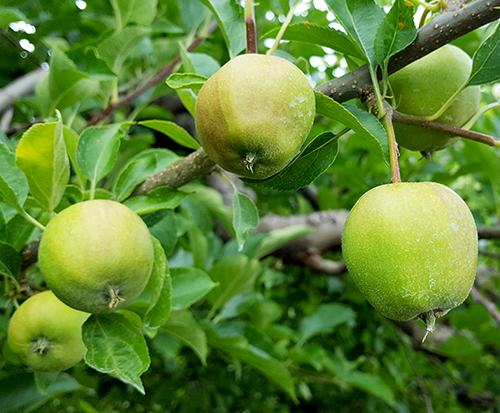 These Golden Delicious apples are about 1-1.5 inches in diameter. Photo by Mark Longstroth, MSU Extension.

Pear (Bartlett and Harrow Sweet) fruit are over an inch in diameter. Fungicide treatment for pear scab can stop in orchards with no leaf symptoms. Pear psylla levels seem low. 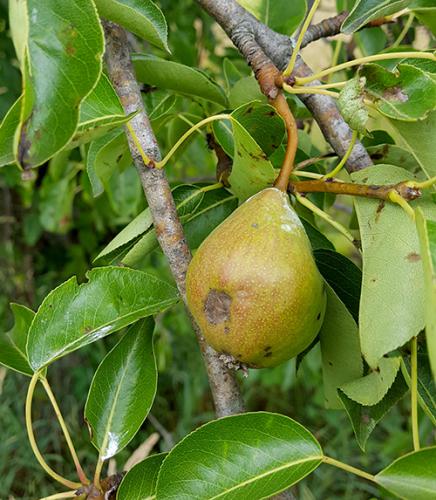 Pear scab can be seen on the fruit and leaves of this unsprayed pear tree. Photo by Mark Longstroth, MSU Extension.

Blueberry harvest has begun with early varieties such as Bluetta and Duke. Growers are hand-harvesting and many farms are open for U-pick. Fruit volumes should really increase in the next week.

Birds are always a problem in the early season. Most growers need to irrigate to maintain soil moisture. Blueberry maggot and SWD are being trapped in blueberries. The tight schedules used to control SWD will also control blueberry maggot. 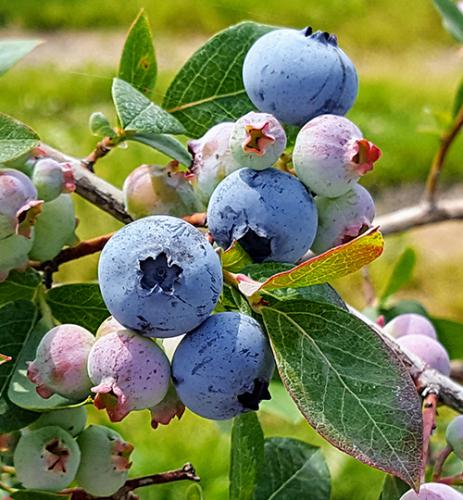 Harvest is at least a week away, but the ripe blue fruit in these fruit clusters are attractive to spotted wing Drosophila. Photo by Mark Longstroth, MSU Extension.

Strawberry growers have begun renovation and many fields have been mowed. Protect renovated plantings from potato leafhopper, which stunts plant growth. Irrigate strawberry fields to get good growth for next year. We are catching SWD near renovated strawberry fields, but the flies have moved to other host fruits close by.

The 28th Annual Viticulture Field Day and Steak Cookout is Wednesday, July 26, at the Southwest Michigan Research and Extension Center. This well-attended, educational event is hosted by the Michigan Grape Society and MSU Extension. Register before July 14 for the early-bird rate.