Soils are drying rapidly as plants use soil water for growth. Growers should be irrigating.

Last week was warmer with highs in the 70s and 80s. Lows were in the upper 40s and 50s. Scattered showers crossed the region several times during the week, but no significant rain fell at most sites.

There was hail in central Van Buren County. There were no significant disease infection events for the week.

Rainfall totals across the region ranged from nothing to more than 0.1 inch. Rainfall since April 1 has been about 6 inches. Perennial plants are growing rapidly. Water use is high as many plants are almost completely leafed out. Turf is drying out. Growers with irrigation should be using it. Evapotranspiration is running from 0.15 to 0.2 inch of water per day.

This week will be cooler with highs in the low 70s. Highs will be in the 80s for the weekend. Little rain is forecast for the week. While we continue to be about a week ahead of normal for heat accumulation for this date, some growers are stating they think we are behind average in development.

Spotty is a good term to describe many of the fruit crops in southwest Michigan. The effects of the May 8 freeze are very noticeable. We are having a hard time understanding some of the damage patterns. Damage assessments are now relatively easy.

Many are surprised at the severity of damage to some crops and lack of damage in others. In some sites where damage was expected to be light, there is significant damage. Other sites that should have suffered have good fruit set. This would indicate pollination was spotty as well. Some growers report the bottoms of hills are their best sites for fruit set. These areas may have been sheltered during cool windy days of bloom.

San Jose scale males were found on pheromone traps at Trevor Nichols Research Center May 22. Crawlers are expected at 375 GDD51 after this biofix. As of June 6, the GDD51 accumulation is 188 and we think crawler emergence is at least a week off.

Peaches and nectarines are growing rapidly and hand thinning has begun. The crop is spotty, with some growers reporting significant injury from the freeze. Overall, the crop looks good and growers need to thin to achieve good fruit size. According to the Michigan State University Enviroweather peach maturity model, the estimated start of Redhaven peach harvest in central Berrien County is July 30 and Aug. 4 for the more northern Fennville, Michigan, region.

Oriental fruit moth egg hatch began in mid-May. Growers should use insecticides targeting the larvae. Flight of the first generation seems to be declining. We expect to see flagging of peach terminals due to burrowing oriental fruit moth larvae.

Protection from tarnished plant bug, plum curculio and rusty spot is needed now. Some rusty spot symptoms have showed up on peaches. Bacterial spot symptoms on peach are hard to find. Long episodes of wetting and temperatures above 50 degrees Fahrenheit favor bacterial spot.

Protect cherries from plum curculio for the first four to six weeks after petal fall. Cherry leaves are susceptible to cherry leaf spot infection at all times. Be sure your orchards are covered. Generally, the tart cherry crop looks pretty average for southwest Michigan.

Plums are sizing rapidly. Shiro are approximately 20 millimeters in diameter, Stanley are 15 millimeters and Castleton are 20 millimeters. The crop is spotty in Japanese and European plums. Maintain protection against black knot until rapid shoot growth stops. Protect plums from plum curculio.

Apple fruit size ranges from 22 to over 30 millimeters in diameter. Frost rings are easy to find on fruit in low areas and in bottoms of trees. Hand thinning has begun.

Apple scab spore trap catches will continue to decline as we move into June. Continued treatment for scab is needed where infections are evident on leaves. Protect susceptible varieties from powdery mildew until rapid leaf growth ceases. 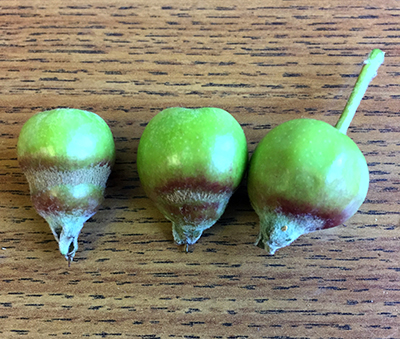 Frost rings form when the skin of the apple is damaged after bloom by a freeze. Photo by Bill Shane, MSU Extension.

Growers should scout for fire blight shoot blight. Fire blight symptoms were found May 22. These were probably from a fire blight infection on April 26. High winds on May 17 and 18 were sufficient for a trauma blight infection. Symptoms from this event should be visible now. There seems to be very little fire blight this year. Terminal wilting found in Rome apples was due to Nectria infection of the bourse (swollen area of the stem).

The regional codling moth biofix for southwest Michigan was probably May 16. Growers can use the codling moth model on MSU Enviroweather to time their sprays. Codling moth egg hatch was predicted to begin June 4 in Berrien County.

Mullein bug damage, looking somewhat like plum curculio feeding scars, has showed up on Red Delicious in Berrien County. Most of the damage by this insect occurs from bloom to 10 millimeters fruit size.

First generation of codling moth are not a problem in pears, because the fruit is so hard. Fungicide treatments for pear scab are ongoing. The other concern is pear psylla, which can build up on succulent leaves.

Grape shoots are 12 to 24 inches long. Bloom is open on early sites in Concord and other early varieties such as DeChaunac. Later hybrids and vinifera grapes have 6-18 inches of shoot growth with flower clusters preparing to bloom in some varieties. Infections of downy mildew and black rot are beginning to show on leaves.

On primary shoots, we are in the bloom or pre-bloom period. All green tissue—shoots, leaves, rachis and flowers—are vulnerable to infections of black rot, downy mildew, powdery mildew and phomopsis. Protect against all of these diseases now.

You should also begin scouting for grape leafhopper, potato leafhopper and rose chafer. Tumid galls have been found on leaves in some wine grapes. If you recorded the date of wild grape bloom, you can use it in the grape berry moth model to determine correct application of insecticides in late June or early July. Wild grape bloom opened May 26-29 in Van Buren County and May 23-26 in Berrien County.

For vineyards with significant secondary fruit emerging after the May 8 freeze, secondary shoots have not entered the vulnerable pre-bloom period. In areas where a major part of the cropping potential is lost, consult insurance and consider your opportunity cost. If appropriate, consider a reduced fungicide program to protect only from leaf and shoot infections.

Blueberries are in the green fruit stage. Growers with irrigation have begun to irrigate. The crop is spotty in some areas. Some sites lost crop due to the May 8 freeze. In some sites, there is a very heavy fruit set and few leaves on the bushes. In some cases, it looks like there was a very heavy set of flower buds last year leaving few if any nodes available for shoot growth.

We had a very long warm fall, which would have encouraged flower bud formation late into the season. It is also possible some leaf buds were lost to winter cold or the early freeze in mid-March when temperatures fell close to 10 F just as growth was beginning.

The focus of disease control should be on anthracnose and phomopsis, especially if growers are irrigating heavily. Use the MSU Enviroweather anthracnose fruit rot prediction model to assess your risk of infection.

Strawberry harvesting has begun. Many growers are dissatisfied with the size of the fruit. Freeze damage and poor pollination are also problems, but the small fruit size seems to be universal in the region. This may have been due to the sudden cold snap in December after a warm November or the cold temperatures around March 14 after a warm February. Some growers are debating whether to open at all rather than disappoint their customers who expect large fruit. 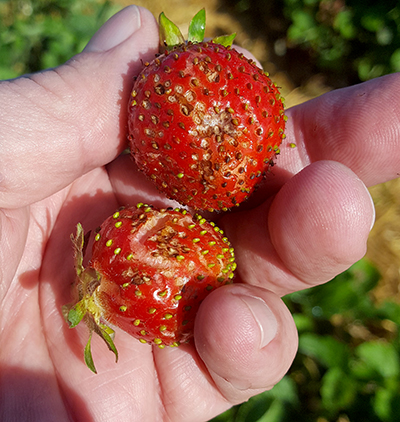 The next Grape Grower Social, co-hosted by Michigan Grape Society and Michigan State University Extension, will be June 21 at 3 p.m. in the winery building at Karma Vista. We will have demonstrations of equipment for fruit zone leaf removal, drone use in wine grape production, and will discuss unique approaches to weed and soil management. Pre-registration is required and is $15; call 269-927-5674 ext. 4011 or email styburs1@anr.msu.edu to register.

A brown marmorated stinkbug clinic will be June 22. Participants need to register to attend.