Last week was warm with highs in the upper 60s and 70s and lows in the 50s. Last week was cooler than the previous week when highs were often in the 80s. Cold fronts crossed the region Wednesday, May 24, and Friday, May 26.

Showers on Wednesday and Friday were both infection events for many diseases. Rainfall totals for the week ranged from more than 0.5 inch to less than 1 inch. Most of the region received about 0.8 inch of rain.

The top soil is generally dry, but soil moisture is adequate. Soil temperatures are in the 60s and field crops are emerging rapidly.

This week will be cooler with highs in the 60s and lows in the 50s. There is a good chance of rain Friday and Saturday, June 2-3. We are about a week ahead of normal for this date.

Apricots are about 1.5 inches in diameter.

Peaches and nectarines are about 1 and a quarter inches in diameter. Oriental fruit moth egg hatch was predicted to begin in mid-May, so growers should use insecticides targeting the larvae. We expect to see flagging of peach terminals by oriental fruit moths soon. Protection from tarnished plant bug, plum curculio and rusty spot is needed now. Some rusty spot symptoms showed up on peaches. Plum curculio egg laying scars are still scarce. We can expect them to increase when we get some warm nights. Bacterial spot symptoms on peach are hard to find. Long episodes of wetting and temperatures above 50 F favor bacterial spot.

In cherries, sweet cherry fruit are about 14 millimeters in diameter and the pits are hard. Montmorency tart cherries fruit are about 12 millimeters and the pits are hard. Protect cherries from plum curculio for the first four to six weeks after petal fall. Cherry leaves are susceptible to cherry leaf spot infection at all times. Growers need to be sure their orchards are covered.

Plums are sizing rapidly. Shiro are approximately 20 millimeters diameter, Stanley are 15 millimeters and Castleton are 20 millimeters. The crop is spotty in both Japanese and European plums. The black knot season continues until rapid shoot growth stops. Be sure to protect plums from plum curculio.

Apple fruit size ranges from 20 to 30 millimeters in diameter and we are approaching the end of the typical chemical thinning window. Temperatures this week will be relatively cool, making thinning sprays less effective. Growers should assess their crop to determine fruit set. The Cornell University apple carbohydrate model for timing thinning sprays and rates is available in the fruit page of MSU Enviroweather. 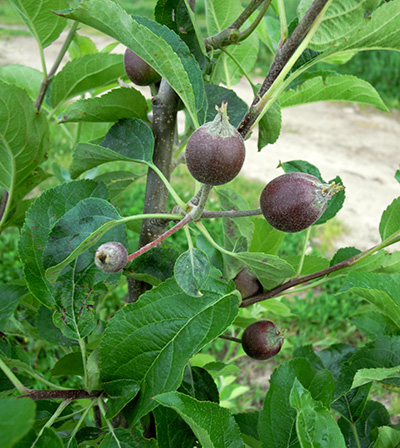 The Enviroweather apple scab model shows that all the apple scab ascospores are mature but not all been discharged yet. Apple scab trap catches were still significant with last week’s rains. Scab spore discharge should continue into early June. We need a good rain to release the rest of the spores. Apple scab symptoms continue to show up.

Continue powdery mildew management on susceptible varieties until rapid leaf growth ceases. Growers should scout for fire blight shoot blight. Fire blight symptoms were found May 22 and these were probably from a fire blight infection on April 26.

High winds on May 17 and 18 were sufficient for a trauma blight infection. Symptoms from this event should appear next week. Terminal wilting found last week in Rome apples was due to nectria infection of the bourse (swollen area of the stem).

The regional codling moth biofix for southwest Michigan was probably May 16. Growers can use MSU Enviroweather’s codling moth model to time their sprays. Egg hatch for codling moth is expected later this week in Berrien County. Other insects of concern are plum curculio and tarnished plant bug. Scout for spotted tentiform leafminer, aphids, white apple leafhopper and European red mites. Wooly apple aphid has become a problem in many Michigan apple orchard in recent years.

Pear (Bartlett and Harrow Sweet) fruit are approximately 20 millimeters in diameter. Growers should check their trees for fire blight from the April 26 infection period and the May 17 and 18 high winds. Do not use Streptomycin for fire blight post bloom unless there is hail or strong winds. The first generation of codling moth are not a problem in pears. Fungicide applications for pear scab are ongoing – the other concern is pear psylla, which can build up on succulent leaves.

Grape shoots are 8 to 16 inches long. The flower clusters are separating in Concord, Niagara, and early hybrid varieties. Later hybrids and vinifera grapes have 1 to 5 inches of shoot growth with flower clusters exposed on the longer shoots. Infections of downy mildew and black rot are beginning to show on leaves.

We are now in the immediate pre-bloom period. All green tissue – shoots, leaves, rachis and flower clusters – are vulnerable to infections of black rot, downy mildew, powdery mildew and phomopsis. Growers need to protect against all of these diseases now.

Growers should also begin scouting for grape leafhopper, potato leafhopper and rose chafer. Growers who recorded the date of wild grape bloom can use it in the grape berry moth model. Wild grape bloom opened May 26-29 in Van Buren County and May 23-26 in Berrien County.

Vineyards with damage from the May 8 freeze have secondary shoot growth. Vineyards with significant primary shoot loss will have many secondary shoots. This complicates management because they will have two bloom periods and two flushes of crop. In areas where a major part of the cropping potential may be lost, consult insurance and consider your opportunity cost. If appropriate, consider a reduced fungicide program to protect only from leaf and shoot infections.

Blueberry bloom has ended and a good crop of is visible. Shoot growth is excellent in most locations. As we move into green fruit stage, the focus of disease control shifts from mummy berry to anthracnose and phomopsis. Be sure to change the mode of action of your fungicides to include these diseases. Using a different modes of action reduces the risk of fungicide resistance occurring in blueberries. 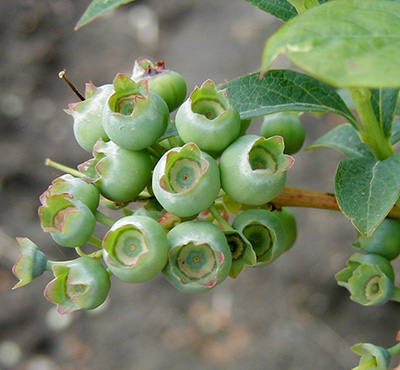 Strawberry bloom is ending. The largest fruit are about an inch in diameter. Growers need to protect the fruit against tarnished plant bug.

In brambles, red and black raspberries are blooming and blackberry flower clusters are exposed. Avoid spraying during the day when bees are foraging. Primocanes are about 6 to 12 inches tall.

Agricultural Weather Forecast for May 11, 2021