Grape berry moths are between generations, and berry infections from previous rainy periods are showing symptoms in some vineyards.

With the hot weather lately, we are getting some of the much-needed heat for crop development. Shoot repositioning continues in many vineyards in the area. Juice grape clusters have closed, and various wine grape varieties are reaching berry touch.

More Japanese beetles have been seen in vineyards in the past two weeks, but leaf damage has remained light in most locations. Fruit in juice grapes and wine grapes should be resistant to black rot, downy mildew and powdery mildew by this point in the season. However, new symptoms of black rot and powdery mildew are still appearing in numerous juice vineyards from infections that occurred during the susceptible period. For powdery mildew, wet periods during spring and early summer promoted spore release. From here on, the fungus won’t need moisture to develop. No new fruit infections are expected at this time as the berries have become resistant. However, infected berries produce spores that can infect leaves. For the rest of the season in juice grapes, the emphasis for any fungicide sprays should be on protecting leaf area, especially from downy mildew.

Second generation grape berry moth flight is mostly over and larvae are feeding in clusters. They will emerge as adults and mate soon, and the third generation of egglaying will begin in around two weeks (see below).

Based on the model prediction, grape berry moth egglaying will begin the end of next week or the beginning of the following week. Apply ingestion poisons such as Intrepid, Belt or Altacor as close to 1,620 GDD47 as circumstances permit (dates listed below). Aim to apply contact poisons such as Imidan, Sevin or pyrethroid materials after the first eggs have hatched, 100 GDD47 after the listed date, usually four to five days later.

Concord is at berry touch and berry diameters range from 1 to 1.5 centimeters. Vignoles clusters are beginning to tighten, and berries are 0.75 centimeters. We saw a large relative increase in the number of moths per trap during scouting July 20, but now numbers are low, ranging from zero to two moths per trap. This signals the second flight of grape berry moth males is ending. Grape berry moth control appears to be very good in vineyards we visited this week. A few clusters have signs of grape berry moth damage in hot spots, but most of this damage involves only a small entry wound on a single berry with no further increase in the severity of damage. In vineyards we scouted July 27, infestation ranged from 10 to 20 percent of clusters with grape berry moth feeding damage. The vast majority of damage is on vines that are adjacent to woods containing wild grape. Growers should check the grape berry moth Enviro-weather model to identify when egglaying by third generation is likely to begin.

Potato leafhoppers and eastern grape leafhoppers were not seen during scouting, but growers and scouts should continue to look for these pests on foliage. Japanese beetles have increased in numbers at some sites, and some light feeding is visible on leaves. Overall, beetle numbers are still low and vineyards with a healthy canopy do not need treatment at this time. Growers of susceptible vinifera and hybrid varieties should still scout regularly to detect possible build-up of Japanese beetle populations and plan to treat if canopy protection is needed. 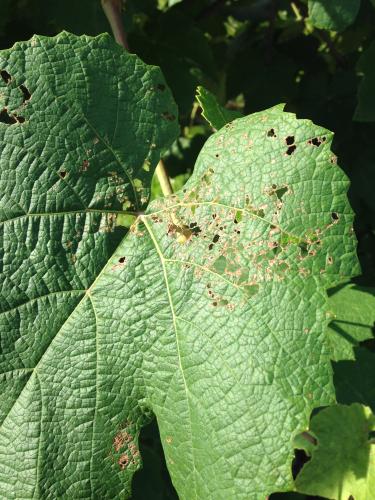 The incidence of disease symptoms at our Berrien County scouting sites is still low. In Concord, 5 percent of leaves were infected with either phomopsis or black rot, and in Vignoles, 20 percent of leaves were infected with either of these diseases. A very low incidence – less than 5 percent – of black rot-infected berries was also observed in Concord and Vignoles. It looks as though all of these symptoms are old and these infections will not spread. Powdery mildew and downy mildew symptoms were not observed in these vineyards.

Niagara clusters are beginning to tighten and berry diameters are 1 to 1.5 centimeters. Chancellor clusters are also past berry touch, and some early color can be seen on the berries which are 0.75 centimeters in diameter. The number of grape berry moth males caught in traps ranged from zero to 12 moths per trap, and second flight is also finishing up in this region. Grape berry moth damage in these vineyards was low and ranged from 16 to 38 percent of clusters infested. As was observed in Berrien County vineyards, the incidence of damage is highest at vineyard borders, but the severity of damage is still low and largely composed of damage to a single berry in an infested cluster. Potato leafhoppers and grape leafhoppers were not seen during scouting July 27, and no Japanese beetles were observed, but growers should continue scouting for these pests from now until harvest.

Downy mildew and powdery mildew symptoms were absent from clusters in Niagara and Chancellor, even though these varieties are susceptible to these pathogens. Some downy mildew leaf lesions, or “oil spots,” were seen in the Niagara vineyards, but the incidence of infected leaves remains low – less than 10 percent of leaves with symptoms – and the disease has not moved onto fruit.

This scouting report is supported by the Michigan Grape and Wine Industry Council and the National Grape Cooperative.