Last week was hot with highs near or above 90 F and lows in the 60s. Rainfall was light and variable across the region. Storms moved through the area on Friday (June 29) and at the southern end of the state on Sunday afternoon (July 1). Some areas received 2/10 to 3/10 of an inch, but most areas received less than a tenth inch of rain if they received any rain at all.

Weather for this week is forecast to stay hot and dry with little chance of rain. Soils are very dry. Plant water use continues at about an inch of water every five days, if it is available. The dry conditions are suppressing the emergence of some insect pests from the soil. Our growing degree day accumulations continue about a week and a half ahead of the average of the last five years. Southern sites are only about a half a week ahead of northern sites in the region.

Be on the lookout for brown marmorated stink bug, a new invasive pest seen in very low numbers so far in Michigan. This stink bug is brown in color, has white, striped antennae and stripes on either side of the rear abdomen. Positive identification of this pest should be done by Michigan State University insect experts.

Large numbers of Japanese beetles should emerge in areas that received rain over the weekend. Growers trapping for spotted wing drosophila (SWD) flies are trapping SWD in increasing numbers. This pest can destroy a crop quickly before a grower knows he has it.

Strawberry growers are finishing renovation and applying herbicides. It is very important under these dry conditions to irrigate and get plants off to a good start. Growers should treat for potato leafhoppers as the new leaves emerge to prevent this pest from stunting their plants this season.

Bramble harvest is beginning to wind down. Size and quality are suffering from the dry weather. Yields were also limited by poor growth and fruiting from freeze-damaged canes. Growers should irrigate to maintain plant health and fruit growth. Growers should be on the lookout for spider mites, Japanese beetles and potato leafhoppers.

Spotted wing drosophila females were trapped for the first time this season last week in high tunnel blackberry plantings at the Southwest Michigan Research and Education Center (SWMREC), and are expected to spread to raspberries. Spider mite numbers are on the increase in tunnel plantings at SWMREC. 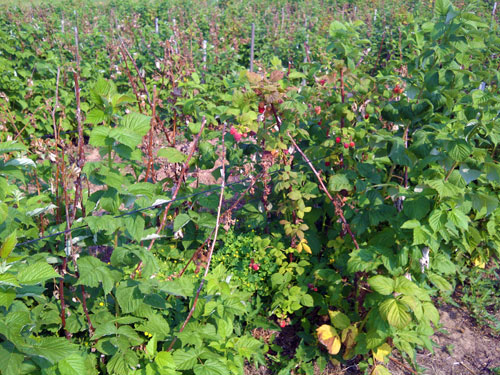 Blueberry harvest is moving rapidly and most growers are machine-harvesting Bluecrop. Fruit is ripening quickly and growers are harvesting colored fruit to reduce losses to birds. Growers are also reporting fruit losses to raccoons. Growers should be irrigating to maintain fruit growth and quality as well as plant health. Even growers who are irrigating are having a hard time maintaining adequate moisture levels in the soil. Plants in unirrigated fields and fields with poor weed control are collapsing.

In grapes, fruit on the primary shoots in juice grapes has reached berry touch. Fruit on secondary shoots is at buckshot berries. Wine grape development is not quite as advanced, but it shows the same degree of developmental differences between primary and secondary shoots. Phomopsis and black rot are present in unsprayed vineyards, but dry weather has kept disease severity low. The post-bloom period is important to prevent mildew on the fruit. Powdery mildew was detected in trace amounts in an unsprayed vineyard we scout. Despite the very minimal amounts of rain we have had, there have been instances of ground fog in the morning, which could provide favorable conditions for both powdery and downy mildew. No downy mildew has been detected.

Dry soils are causing wilting and yellowing and drop of older leaves of many fruit plants in sandy sites. Growers should irrigate plant material established this spring and perhaps last year. Growers with well-established plantings and no fruit can reduce irrigation in tree fruits to reduce growth. Irrigation can be reduced by a third or more, but not cut off completely. The flight of the second generation of San Jose scale has started. Sprays for crawlers of this generation are generally targeted for 600 degree days base 50 F after this biofix.

Peach fruit are 2 inches or more in diameter. Growth is abundant in sites with little or no crop, adequate water and fertilizer. Yellowing and drop of older leaves is becoming common in sandy sites from a combination of stresses. Harvest of early varieties such as Brightstar is underway, with Garnet Beauty, Summer Serenade and PF 8 Ball to start soon.

Oriental fruit moth trap catches started to increase last week, corresponding to the start of the second generation moth flight. Control for oriental fruit moth, where warranted by the crop, is generally recommended at approximately 100 to 150 GDD for selective products with ovicide activity or 170 to 195 GDD (10 to 15 percent of egg hatch) for organophosphates, carbamates and pyrethroids (check product) from the biofix date. Trunk sprays for peach tree borer are generally applied in late June to early July, but may need to be done earlier or after harvest to avoid problems with days to harvest restrictions for Lorsban.

Cherry harvest has ended. Due to the dry conditions, cherry leaf spot is not a serious problem in either sweet or tart cherries. Birds did a good job of cleaning up the fruit. Growers believe that raccoon numbers are very high this year.

Japanese plums are over an inch in diameter. Leaf tattering and shot holes are common due to a wide variety of causes such as earlier frost damage, bacterial infection and physiological causes.

Apple fruits are generally 1.75 inches or more in diameter, with summer apple varieties such as Zestar are much larger at 2.5 inches or more. Redbanded leafroller trap catches are still high in the second generation of this pest. The tiny, white, fluff-like winged stage of wooly apple aphids is common now in Berrien County. Codling moth biofix was set as May 7 and moth flight of this generation should be declining, but may overlap with the start of the second generation flight that is estimated to begin by the end of June.

Obliquebanded leafroller biofix was May 19 and we are past peak egg hatch. Scout for larvae feeding in terminals – damage by this pest is relatively scarce. Oriental fruit moth second generation moth flight was estimated to begin the second week of June in Berrien County – fruit entries by the larvae are being reported now. European red mite populations are increasing and have been found well over threshold in orchards we scout (17 per leaf). The treatment threshold is five mites per leaf. Mature trees without fruit can probably withstand higher levels of mite infestation with little damage.

The first apple maggot flies were trapped several weeks ago. Control of apple maggot is generally recommended eight to 10 days later in sites prone to this pest. Powdery mildew symptoms are common and growers should control this disease until terminal bud set. Green apple aphids can be seen in some sites. Spotted tentiform leafminer numbers increased last week at several sites we scout. Leaf symptoms due to the spotted tentiform leafminer sap-feeding stage should be showing up over the next week.

Pear fruit are about 1.25 inches or more in diameter on Harrow Sweet. Pear psylla is present in low numbers.