For the first time since 2005, I am declaring an official soybean aphid outbreak for the Thumb, up into Bay and Arenac counties.

Aphid populations in the central and southern part of Michigan remain low with aphids limited to the new growth or an isolated, bad field. Why is the infestation focused in the Thumb?

Observations from the Thumb

Fields planted early to mid-May without a seed treatment may be at or over threshold. I saw populations ranging from 100 to thousands per plant, probably depending on timing of initial colonization in the spring. There was also a lot of biocontrol going on out there. The infested fields will throw off winged aphids in the next few weeks. I can tell by the number of aphid nymphs with “big shoulders,” indicating that they will be winged in the final molt. Also, the aphid suction trap at the Michigan State University research farm near Frankenmuth, Mich., is catching winged soybean aphids.

Seed-treated fields planted in early and mid-May have broken, so populations are building in these fields as well as winged aphids deposit babies. This goes the same with later-planted fields that missed the initial spring flight. In addition to local sources of aphids, I would not be surprised to get an additional dump of soybean aphids carried by winds from Minnesota, Wisconsin and other points west. The good news is that we know how to kill aphids and we can do it by spraying only once.

The quick version: Use the 250 soybean aphids per plant threshold, and then hit them hard and only once. Optimize coverage. Go fishing.

Pictures of different levels of infestation can be found below and were taken July 11, 2013, at MSU farm in Saginaw, Mich.

Do not spray these low populations – no yield return + population may flare. 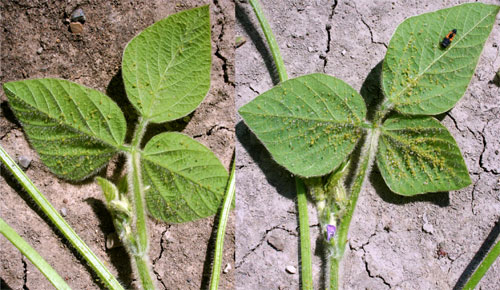 The photo on the left is nearing 250 soybean aphids per plant – infestation limited to top two trifoliates. The photo on the right is over 250 threshold (field average = 305 soybean aphids per plant), but not yet at economic injury level. Consider spray within five to seven. Note: beneficials, fungus or heavy rain events may still reduce the population. 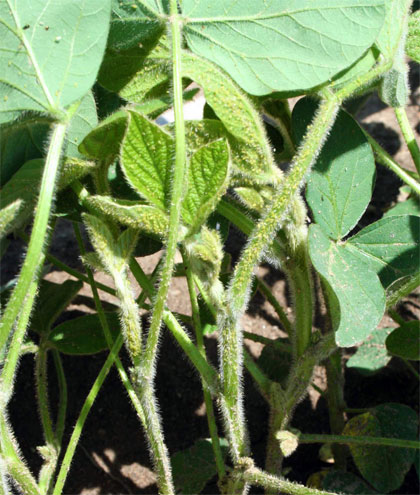 Close or at the economic injury level of 600 to 700 soybean aphids per plant. Aphids on new growth + stems. There is economic return from spraying this level of infestation. Spray this type of field as soon as possible.