Spring has arrived and so have true armyworm moths

Use pheromone traps baited with an attractant to lure armyworm moths into a monitoring trap where they cannot escape and can be counted during daylight hours.

True armyworm is a familiar pest to many. It is famous, or infamous, for its ability to devour massive amounts of foliage in its larval caterpillar stage and then move en mass or “march” to the next feeding area, leaving behind not much more than a few coarse stems. Several crops including grain corn, sweet corn, small grains and many other grass crops are its preferred hosts, but it has been recorded feeding on non-grass plants as well, especially during times when the caterpillars are particularly abundant. It is among the insects that arrive from the south each year from their overwintering sites in the warmer climates of the U.S.

The true armyworm is a moth and member of the Noctuidae family of insects, which includes many species of moths, some migratory and some year-round. Migratory species include true armyworm and black cutworm, and year-round residents include western bean cutworm and what many refer to as “miller moths.” Many larvae (caterpillars) of this family tend to be active at night and are typically difficult to find or observe during the day. The moths of this family are quite often the ones you see flying at night around outdoor lights.

So how do you know they have arrived without staying up all night? Many entomologist as well as agronomists use pheromone traps baited with a synthetically-produced attractant that lures males of a specific species into a monitoring trap where they cannot escape, and thus can be counted during daylight hours.

From the evening of April 19, 2017, to the morning of April 20, several Michigan State University Extension educators reported what may have been the first arrival of true armyworm moths in Michigan. This spring, a number of MSU Extension educators are comparing two types of traps: large, 32-inch wire-mesh Hartstack traps, and small, plastic bucket traps.

These traps are not equal. The Hartstack trap was developed in the 1970s to monitor bollworm and budworm in cotton. The design was based on observations of moth behavior made by entomologists using night-vision goggles. When pheromone lures were placed inside traps, males approached but did not enter; instead, they flew upward to avoid going into the trap. To take advantage of this flight path, the Hartstack trap is open on the bottom. Males approach the pheromone and fly upward into a collecting bin at the top, where they can be counted the next day. 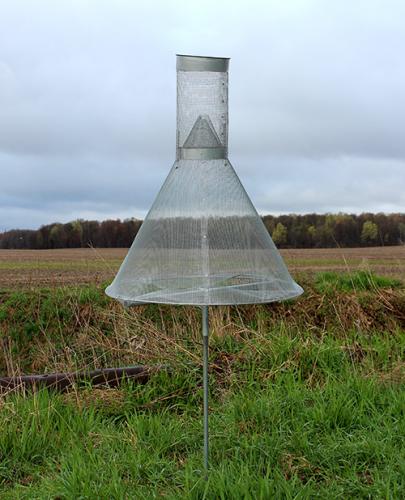 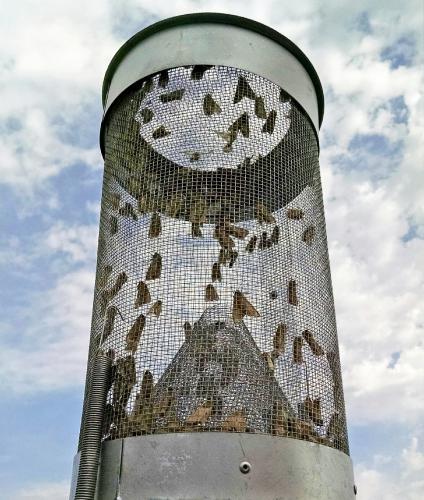 For species that exhibit trap avoidance behavior, Hartstacks can capture a larger portion of males approaching the trap. However, they can be cumbersome to use (live moths must be killed before counting), expensive to purchase and hard to find. An alternative is the bucket trap. Moths flutter around the pheromone lure and drop into a bucket, where they are killed by an insecticidal strip. Counting and maintaining a bucket trap is easy, and they are less expensive ($10 each versus $200 for a Hartstack). However, their small size and design results in a much lower trap catch than the larger Hartstack, which possibly makes it harder to detect low or new moth flights. 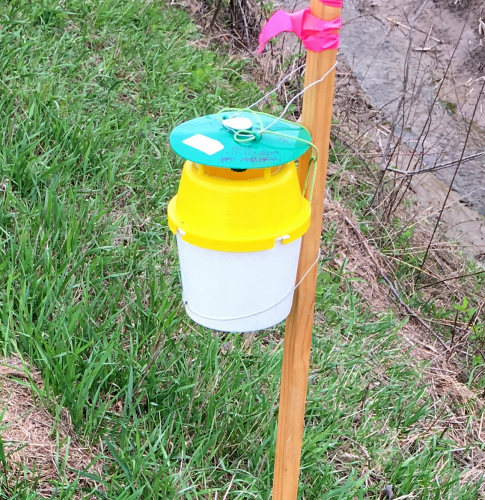 A bucket trap such as this can be used to monitor insect populations of a number of species. Image courtesy of Marissa Schuh, MSU Extension.

Regardless of trap design, the goals of trapping are the same. To determine:

Also, keep in mind that even if moth catch is high, successful establishment of the pest in crop fields depends on other factors. Favorable weather conditions, successful mating and egglaying, favorable crop stage or weed hosts, and natural biological controls all factor into a high moth catch turning into a pest outbreak in the crop.

The following table is displays weekly cumulative trap catch of true armyworm in bucket versus Hartstack traps. Traps are located along the same or adjacent fields.