Stewart’s wilt could be back in sweet corn in 2012

Stewart’s wilt of sweet corn can cause significant damage. The extent is directly correlated to winter temperatures. What can we expect in 2012?

Stewart’s wilt is a bacterium that attacks primarily sweet corn and survives in close association with corn flea beetles. First symptoms are usually flea beetle feeding lesions on the leaves (Photo 1). These lesions will be followed shortly by a yellowish-white leaf streaking parallel to the leaf midrib (Photo 2). Theses streaks eventually dry and turn brown. The bacterium can penetrate the stalk, killing the entire plant. 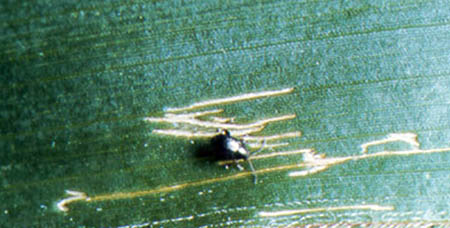 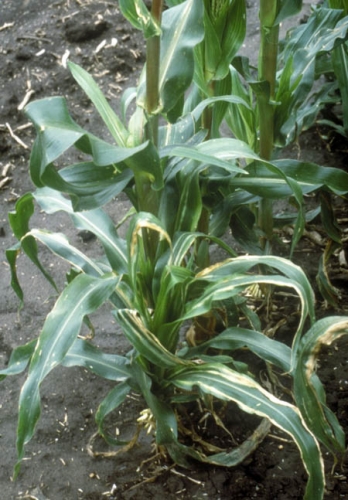 Symptoms are often worse in early planted corn, but it can occur throughout the season and is more severe if the plant is exposed in the early stages of growth. Severity varies from year to year and it has been a while since we have had a severe problem.

The last couple winters have been severe enough that there has been low beetle survival. However, the winter of 2011-12 was quite mild across much of Michigan. Table 2 data indicates growers across much of the Lower Peninsula can expect to experience slight to possibly severe Stewart’s wilt symptoms. Average temperatures for other Michigan sites can be calculated by going to Enviro-weather and retrieving the daily data records from the site nearest your location.

The first step in controlling Stewart’s wilt is to choose cultivars having some genetic tolerance to the bacterium. The next step is to control the beetle. This can be accomplished by purchasing seed already treated with the proper insecticide. Treated seed will protect the early, most susceptible growth stages of the plant. Growers can get untreated seed and then wait to see what kind of beetle activity occurs. Control measures need to be taken when beetle numbers reach five beetles per 20 plants from five locations in the field. Controlling after you see beetles requires scouting fields several times a week, so many growers use the treated seed.

Be aware that Stewart’s wilt has the potential of making a comeback this year. So don’t let it catch you off guard.