The recent early-season warm up, combined with the relatively dry soils for this time of year, are creating the opportunity for spring fieldwork activities a bit earlier than normal. Activities including winter wheat topdressing, chisel plowing on late harvested corn fields, and widespread sugarbeet planting across the Thumb are all benefiting from these conditions. With the increased suitability of the soil for fieldwork comes a flush in all the processes that influence nutrient dynamics. Here in Michigan, starter fertilizers are used extensively to ensure early crop growth isn’t limited by poor nutrient availability. With our normally cool, wet soils in the spring, phosphorus and nitrogen are important nutrients to supply as amounts in the soil aren’t typically readily available under these conditions. In recent years, sulfur has emerged as a nutrient of interest for possible early season application.

Why worry about sulfur in Michigan?

Sulfur dynamics in the soil are similar to nitrogen. Much of the available sulfur is derived from decomposition and mineralization of crop residue and organic matter. Unlike nitrogen though, most Michigan soils typically contain adequate sulfur levels for crop production. The problem is matching up the availability of that sulfur with the demand for sulfur by the plant. Plants can only take up sulfur in the sulfate form. Sulfur in the soil tends to exist in organic complexes that need to go through microbial conversion to sulfate. Those microbial processes are highly dependent on temperature and moisture; warm soil conditions with adequate moisture are going to favor microbial activity compared to cold, saturated soils. As we push planting dates earlier in an attempt to capture maximum yield potential, the thinking has been that these microbial processes haven’t ramped up enough to provide adequate sulfate for early plant growth.

Several other issues have contributed to the increased emphasis on S fertilization. The Clean Air Act has dramatically reduced how much sulfur comes out the smokestacks of factories and tailpipes of automobiles. This reduces how much gets into the atmosphere and ultimately how much gets deposited across the landscape. Michigan’s downwind location from the western edge of the Rust Belt meant prior to the mid-90’s, we could expect to see around 25 lb/ac (30 kg/ha) of sulfate (SO4) deposition each year. Data from the 2000’s shows, however, that these levels have been trending closer to 10 lb/ac (11 kg/ha). Figure 1 illustrates annual SO4 deposition since 1979 at the Kellogg Biological Research Station near Hickory Corners (northeast of Kalamazoo), one of the longer-term monitoring locations in Michigan. 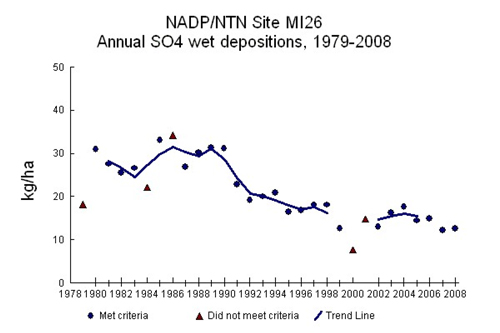 Shifts in our fertilization practices have also influenced sulfur additions. Fertilizer products have increased in purity as manufacturing processes have improved, removing many of the sulfur impurities that would have once been present in fertilizers. Animal manures are also applied to fewer acres than in the past, resulting in a decrease in widespread micronutrients applications. On top of these decreases in sulfur amendments, sulfur removal through grain exports has increased as yields have trended upwards. Any one of these factors is unlikely to make much of an impact, but the combination of all of them may be enough to make a case for looking at supplemental fertilization of sulfur.

Are you at risk for sulfur deficiency?

Sulfur responses are most likely to be seen in coarse textured soils with low organic matter levels. Most of a soil’s inherent sulfur supply will come from organic matter, so low initial levels are going to limit how much sulfur will be available for crop uptake. One percent of organic matter can be expected to provide around two to three pounds of sulfur per acre. Sandy soils can be at risk as well for their leaching propensity. Just like nitrate, sulfate is a negatively charged ion in the soil that isn’t tightly bound in the profile. The same kind of high precipitation events that flush nitrate from the soil profile will tend to leach sulfate as well.

Sulfur response studies have been conducted at a number of universities over the last few years, including Iowa, Minnesota, and here in Michigan. Iowa studies have failed to show any response to sulfur applications, a fact not surprising with their finer textured soils and greater organic matter levels. Those same sorts of soils fail to show sulfur responses in Minnesota as well, but good responses can be observed on sandy, low organic matter soils there.

Michigan State University conducted sulfur studies on both corn and soybeans from 2005 to 2007. Like most other studies investigating the effects of sulfur, responses were inconsistent. Over the 10 site years of data for both corn and soybeans, yield increases with sulfur application were noted about 20 percent of the time. Sites with course, sandy soils and low organic matter concentrations were more responsive than those with more clay and higher organic matter levels.

Michigan State University doesn’t have formal sulfur fertilization recommendations due to low frequency of response, but Minnesota advises 25 lb/ac S as incorporated broadcast applications or 12 lb S/ac for starter applications for corn on sandy, low organic matter sites. When a yield response did occur in the Michigan studies, it was with either 5 or 10 lbs sulfate-sulfur per acre. If producers here in Michigan are inclined to apply sulfur fertilizers, these guidelines would be a reasonable starting point. Sulfur applied as starter is going to be more likely to provide a yield response than broadcast applications. But of course, don’t expect huge year-in, year-out yield increases from adding sulfur to a starter fertilizer blend, even on a site where responses might be more likely to be seen.

What’s going on this year?

Above average temperatures and below average precipitation has been pretty apparent this spring with the abundance of warm sunny days this March. Figure 2 shows average temperature departure from the mean during March 2010. The color scale adjusts to illustrate a 10 degree range in temperatures, and it’s worth noting that even the smallest departure from the mean here is still two degrees above 30-year averages. Much of central Michigan has been at least four degrees above average this March. 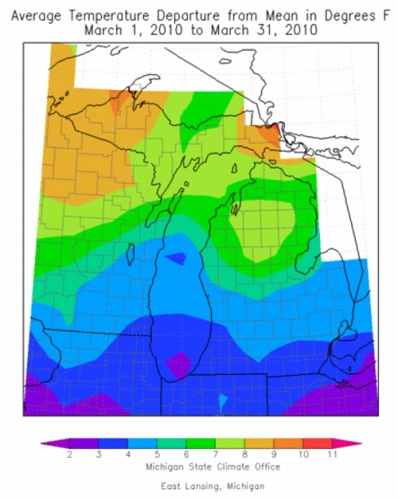 Precipitation data for March (Figure 3) shows that Michigan is between 50 and 75 percent of long-term averages in the southern part of the state and between 25 and 50 percent across the central region of the Lower Peninsula. This decreased precipitation trend has been evident all winter. Figure 4 illustrates how southern Michigan has been at 50-75 percent of means since the first of the year while the northern half of the southern peninsula has been 25-50 percent of long-term averages. 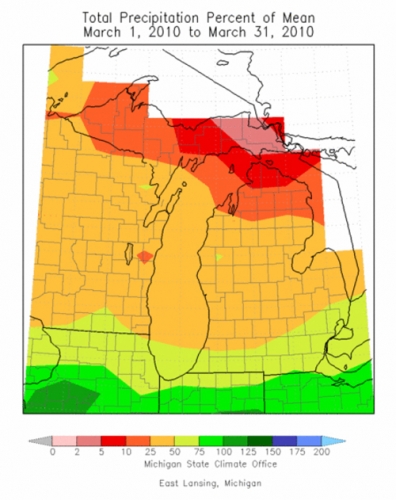 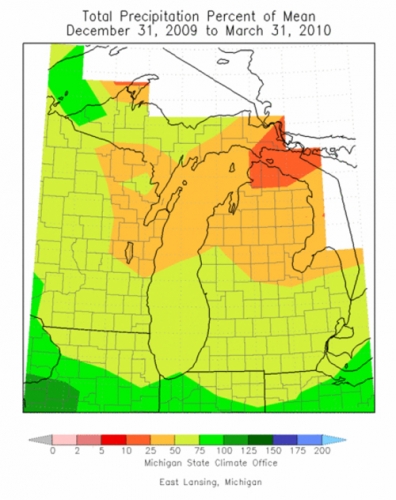 So what does all this mean for our sulfur management this spring? These conditions have likely accelerated soil microbial processes and thus increased the pool of sulfate in the soil profile available for crop uptake compared to typical levels. With below average precipitation, the sulfate in the soil has been exposed to less snowfall and rainfall to leach it out of the soil profile.

The greatest responses to sulfur are generally observed with early planting dates when sulfate supplies aren’t abundant in the soil. With the conditions we’ve experienced this March, it’s reasonable to conclude the available soil sulfate supply will be greater this year than most.

Yield responses to fertilizer products, particularly secondary or micro-nutrients, are always difficult to precisely predict. The key to successful fertility management lies in determining what nutrients the crop requires and supplying them in a manner to meet that demand. Accounting for how weather might affect those nutrient dynamics is always important, and the unusual conditions we’ve experienced this spring call for some thought on needed shifts in soil fertility management. Environmental conditions have likely reduced the probability of responses to sulfur fertilization this year. Coarse-textured, low organic matter soils are still going to be the most prone to sulfur deficiencies, but responses on even these soils are probably going to be reduced this year.

Hemp Regulation and Production in Michigan