Summer sawflies may be active in conifers

Missing or browning foliage of conifers in the early summer may be the first signs of a sawfly infestation.

Sawfly larvae are often mistaken for caterpillars, but are actually a primitive group of insects related to wasps and bees. The larvae usually feed in colonies of 10 to 50 individuals and typically eat all of the needles or leaves from a single branch. The adult is a brownish or black, fly-like, non-stinging wasp. When populations are high, these summer feeding sawflies can cause serious defoliation because they eat both new and old foliage.

Growers may find larvae of several sawfly species feeding now. Two of the more common sawflies we find during the summer are redheaded pine sawflies and introduced pine sawflies. 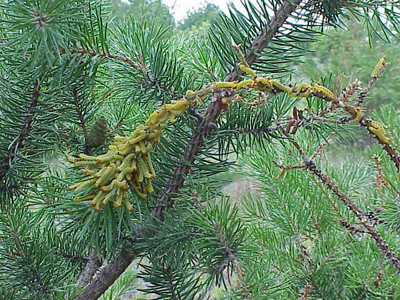 Introduced pine sawflies are found primarily on white pine, but may also on be found on Scots, red and Austrian pine. The larvae can grow up to 1 inch long with yellow and white spots on a black background. Usually you will find it feeding alone or sometimes with a few other larvae. Since we only find small numbers of this sawfly, they usually do not cause much injury to the tree. 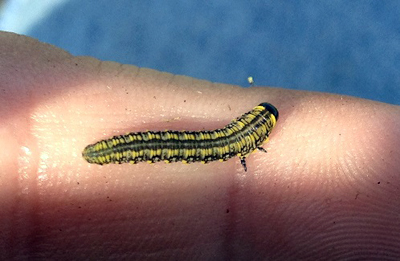 If sawflies are in small numbers, Michigan State University Extension recommends clipping out the colony and mash or otherwise destroy the larvae. Insecticides will also kill these larvae, but be careful and only use these products if it is truly necessary to protect the tree since most sawfly populations are controlled by parasitoid wasps, and the wasps will be very susceptible to any insecticide that you use.

Note that Btk products such as Dipel, a biopesticide commonly used to control leaf-feeding caterpillars, is not effective on sawfly larvae.

Why are my pine trees turning brown?