Many subdivisions and site-condo remain with empty lots in Suttons Bay Township – the same as in many parts of Michigan. This reflects a change in tastes for the type of housing and neighborhoods many now want.

Suttons Bay Township completed their first major step toward a rural form-based zoning ordinance in late August, 2013. While the three day Charrette jumpstarted the process by defining rural character and other issues one vexing issue came to the forefront – which may be a concern for many rural communities in Michigan. That is a large number of older subdivisions which have remained mostly empty.

If one were to map the locations of these empty subdivisions on a zoning map it would look like a bunch to spot zones spread all over the township. Many of these subdivisions (and some are site condominiums) were done in the 1990s and early 2000s, well 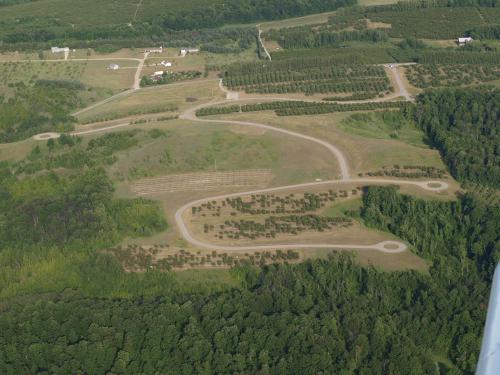 before the housing crash. But they remain predominantly empty.

The following are the characteristics of these developments in Suttons Bay Township:

The developments are a result of what conventional zoning allowed. “Conventional” zoning is the type of zoning ordinance most frequently found in Michigan. With this type of zoning there is often a zoning district which is named “agricultural,” but in fact that name is misleading. It is not a true “agricultural” zoning district. In most cases, and in Suttons Bay Township’s case, it might be more accurately described as “rural residential” or a “rural throw-away” zone. The characteristics of such zoning districts include allowed uses which permit by right single family homes (and maybe other types of housing) mixed with agricultural uses, on parcels which are too small for production agriculture but in many cases larger than needed for housing.

In Sutton Bay’s case the minimum parcel size in their Agricultural District was two acres. Thus each subdivision, or site-condo, has lots or units, each of which are two acres or larger in size. In the words of one Suttons Bay Township Charrette participant:

“Subdivisions in the rural areas were a bad idea and still are – can’t solve this problem with zoning.” Suttons Bay, like many townships, is now faced with dealing with this legacy that grew out of well-intended past zoning decisions. Other concerns expressed, both strongly and often, by the public at the Charrette included a lack of affordable housing.

What happened in Suttons Bay Township with larger parcel single family home developments in a rural setting is not unusual – and is symptomatic of nation-wide trends in current and future housing demand. Research by Arthur C. “Chris” Nelson shows that housing market preferences are shifting. As Baby Boomers (today’s emerging senior citizens) and Millennial (generation Y) (born in early 1980s to early 2000s) enter the housing market they are looking for smaller urban housing units. The change is now 65% of all housing buyers prefer to live in walkable mixed use areas: 19% want to be in a city; 28% look for a suburban neighborhood (with a mix of houses, shops, and businesses); and 18% are looking for the same type neighborhood in a small town. (Belden, Russonello & Stewart, LLC. The 2011 Community Preference Survey: What Americans are looking for when deciding where to live, commissioned by the National Association of Realtors, March, 2011.)

Photo: This illustrates a transect of human development from least intense (left) to most intense (right). Michigan has development at both ends, but the variety of housing types in the middle of the drawing are not common –but that is where demand is growing. Illustration by Dan Parolek.

The issue in Michigan is that not many of these preferred housing types have been built. So when Boomers, Millennials and others look for a home they end up buying what the really do not want or they choose to live elsewhere. In as much as this trend impacts Suttons Bay Township it may not be unexpected large parcel rural developments remain empty – and might continue to do so. Michigan, and Suttons Bay Township, lack the variety of housing which would attract sales to the two largest growing sets of housing buyers: Boomers and Millennials. Without that variety, a community will not be as successful in attracting new population – or keeping some of its current population – and the economic development that growing population brings.

Residents also pointed to some solutions such as allowing higher-density smaller housing close to Suttons Bay Village (and its public water and sewer system). The smaller housing, at a higher density, without on-site septic system costs all result in lower construction costs. Others suggested in the future new subdivisions or site-condos should be allowed to develop at higher densities (smaller less expensive parcels and thus homes). This would include multiple housing types: traditional single family homes, townhouses, apartments, and so on.

From this type of Charrette discussion by members of the public various ideas were put forth. One idea that may get some traction was to create a series of options for landowners which may re-invent, or re-invigorate those empty subdivisions. The mostly-empty developments would be placed in an overlay zone which would provide options representing different choices for the developer or owners of land in a mostly empty development, and might apply to all or part of a subdivision/site-condo: 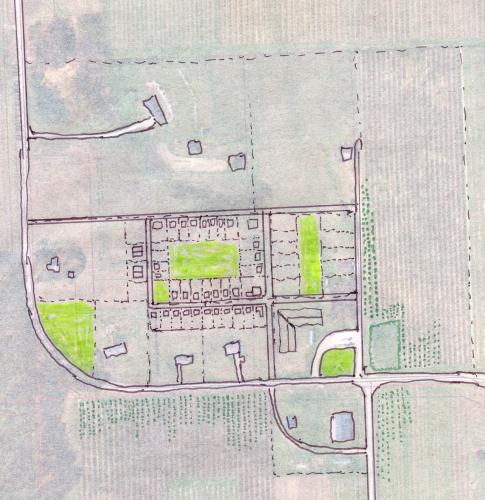 Photo: One vision for increasing density in a rural undeveloped subdivision. Drawing by Glenn Pape.

For the last three bullets incentives may be possible through a system of open space, clustering, and moving development rights from all or parts of the subdivisions and site-condos to areas near the Village of Suttons Bay. This might be done under the Open space preservation (MCL 125.3506) of the Michigan Zoning Enabling Act. This approach is still subject to review by a municipal attorney and its details, as well as if it can be done, is not known yet.

For more information about the overall Suttons Bay Township Charrette, read Suttons Bay Charrette kickstarts rural form-based code. This project is a part of a Michigan State University Extension applied research effort. The applied research is to explore the use of a form based code/zoning for a rural setting.