As China increases its forests, a Michigan State University (MSU) sustainability scholar proposes a new way to answer the question: if a tree doesn’t fall in China, can you hear it elsewhere in the world?

In this week’s journal Asia and the Pacific Policy Studies, MSU’s University Distinguished Professor Jianguo “Jack” Liu dissects the global impact of China’s struggle to preserve and expand its forests even as its cities and population balloon.

Because China’s supersized global role makes each domestic decision a world event, Liu shows how China’s efforts to sustain forests influences other countries, and in turn how those changes may rebound to China. He is the author of “Forest Sustainability in China and Implications for a Telecoupled World.”

“For a long time, many scientists have focused specifically on one place to understand environmental impact, but that no longer is enough,” said Liu, the director of MSU’s Center for Systems Integration and Sustainability and the Rachel Carson Chair in Sustainability. “Economic development and environmental conservation in one place are increasingly having substantial influence elsewhere, and spill over into places we don’t consider.”

Deforestation that eases in China tends to reappear in the countries that sell them lumber and food to meet their ravenous appetite for housing and furniture as well as food. But Liu notes that that’s just the beginning. He deploys the telecoupling framework – a new multidisciplinary research tool that embraces the minutia of give and take. Telecoupling is socioeconomic and environmental interactions over distances. It goes beyond the idea of connection, as telecoupling factors in actions and reactions over distances.

In the past three decades, China has succeeded in increasing its forest cover. Sweeping policies that 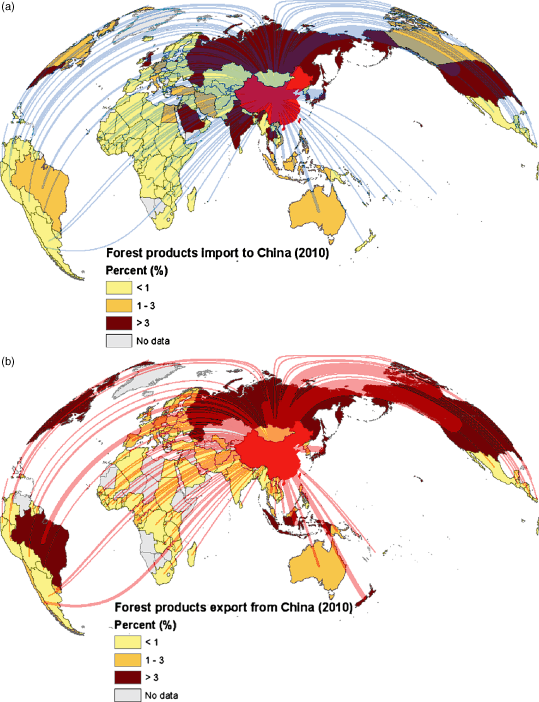 limit logging or encourage returning farmland to forest are credited with some of the success. Importing food, such as soybean and meat, and forest products like timber or wood furniture, also contributes. But that seems to have caused forests to decline in the countries selling the forest goods to China, as well as a spray of other impacts.

Importing food to China can allow more land to be returned to forest in China, yet when food demand from China becomes higher, farmers in other countries such as Brazil have more incentive to mow forests down or intensify agriculture by applying more fertilizers and pesticides.

Liu has introduces the telecoupling framework as an integrated way to understand how distance is shrinking and connections are strengthening between nature and humans.

Liu also shows there’s more to this than trade. He points out how growing foreign investment in China has led to more houses, factories and infrastructure, all of which carve into forests. Even getting smarter – and sharing knowledge and technology more freely – can benefit or harm forests. Spreading the message of environmental protection can be a forest’s friend, while spreading knowledge of technology can make powerful, efficient machinery available that harvests forests more efficiently.

And telecoupling science also allows scientists to consider “spillover” systems – the countries that are left out of the direct equations of trade between China and its partners in food and forest goods, but who produce the machinery to harvest and transport timber, or process timber, or even are home to routes for smugglers.

“The days of simply looking at sustainability at one place are over,” Liu said. “We need to understand how the world really works and acknowledge that the world isn’t as big and disconnected as we sometimes treat it. “

The research was supported by the National Science Foundation, NASA and Michigan State University AgBioResearch.

Forest Sustainability in China and Implications for a Telecoupled World