The Role of Cooperative Coffee-Washing Stations for Rwandan Coffee

Rwandan coffee is increasingly recognized as a high quality product, sought after by specialty coffee buyers. Despite impressive growth of the sector over the past two decades, coffee productivity in Rwanda is among the lowest in East Africa. 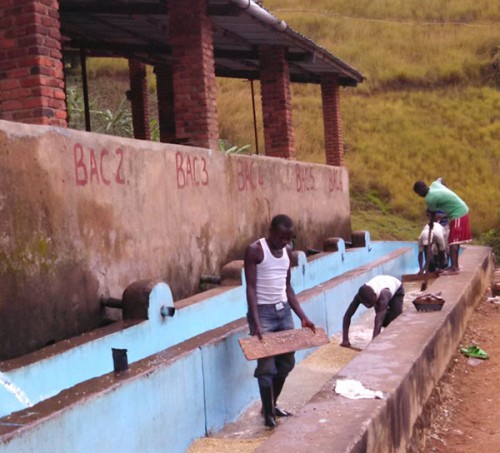 Rwandan coffee is increasingly recognized as a high quality product, sought after by specialty coffee buyers and consumers world-wide. The coffee sector in Rwanda is made up of over 355,000 farmers, mostly smallholders, and is a major source of export revenue for the country (NAEB Census 2015). Despite impressive growth and a rapid transformation of the sector over the past two decades, coffee productivity in Rwanda, at 385kg/ha, is among the lowest in East Africa (ICO).

In the late 1990s the Rwandan government began a process of liberalization and privatization of the coffee sector, dismantling barriers to trade, and creating incentives for groups and organizations to invest in coffee production (Boudreaux, 2011). These reforms led to private-sector investments in coffee-washing stations (CWS) and incentivized smallholder farmers to shift some production from semi-washed (ordinary) to fully-washed (specialty) coffee. Consequently, the number of coffee washings stations increased from a single one in 2002 to 245 in 2015 (NAEB Census 2015).

During this time, coffee farmers also began forming cooperatives, often building their own washing stations to process coffee cherry. As such, the processing sector is comprised of both private and cooperative-owned CWSs. Despite this transformation, the coffee sector in Rwanda continues to struggle with high production costs, low productivity, and low producer cherry prices (AGLC, 2016). Rwanda’s coffee cooperatives are farmer organizations established to improve smallholder income and livelihoods mainly by providing technical assistance and inputs for production, processing fully-washed coffee, increasing farmers’ bargaining power and market entry opportunities as well as providing non-technical services (OCIR, 2005; Bizoza, 2012). Many of these cooperatives have emerged as a result of government and NGO support (Loevinsohn et al., 1994). In 2006, the government of Rwanda issued a legal and statutory framework to support the establishment of cooperatives and to contribute to their functioning and proliferation (MINICOM, 2006; Mujawamariya et al., 2013). Additionally, NGOs and development programs such as the Partnership for Enhancing Agriculture in Rwanda (PEARL) implemented by Michigan State University and partners have helped farmers establish cooperatives and have trained members in various aspects of coffee production, processing and marketing. At present, 14% of coffee farmers are members of a cooperative or smallholder association (NAEB Census 2015).

The viability and future growth of the coffee sector depends on CWSs ability to improve technical capacities, operate profitably, and to create incentives for more farmers to supply the fully-washed channel rather than processing cherries themselves for the semi-washed, ordinary coffee market (Boudreaux, 2011).

Photo: Large washing stations have many fermentation tanks (“Bacs” in French) so that different grades can be fermented separately.  The workers in the grading channels use water, boards and sloped, concrete channels to create a gravitational system that further sorts high quality (heavy) beans from low quality, lighter beans. The workers simultaneously “wash” the coffee in the channels by stamping and sloshing around in their rubber boots to help more of the mucilage to come off the beans. Photo credit: Ruth Ann Church.