The FoodCorps National Service program has expanded in Michigan to support student’s hands-on learning, healthy school meals and a schoolwide culture of health. Together with communities, FoodCorps serves to connect kids to healthy food in school.

FoodCorps is a nationwide team of AmeriCorps leaders who connect kids to healthy food in school and help them grow up healthy. In Michigan, the FoodCorps program is administered by the Michigan State University Extension Community Food Systems team – a statewide network of MSU Extension educators who’s Farm to Institution work is closely aligned with FoodCorps goals for healthy food consumption in schools and communities by changing institutional food environments and increasing the amount of local food served. FoodCorps service members serve across the state to provide food-focused learning in high-needs classrooms. They add capacity to community-based schools and organizations (called FoodCorps Service Sites) led by site supervisors who have already established successful food programming and extensive partnerships in communities to positively influence school food environments. They promote a schoolwide culture of health through hands-on learning in school gardens, cooking and tasting lessons, and supporting the purchase and service of nourishing, locally-produced foods in the cafeteria. This FoodCorps strategy is based on the “Farm to School’ approach that has been endorsed by the Centers for Disease Control and Prevention, the United States Department of Agriculture and the White House Task Force on Childhood Obesity. And in October, we celebrate National Farm to School month!

FoodCorps has been in Michigan since the program launched in 2010, and this school year, for the first time nationwide, we have a FoodCorps member who was inspired to do this work by the FoodCorps service member who taught her in Traverse City five years ago. This year, in response to the lead crisis in Flint and because good nutrition is one of the few scientifically supported ways to reduce lead uptake among exposed children, the national program scaled up our team there, growing from two to six locally-recruited service members. By graduating a service site out of the program at the end of the school year in July, we were able to bring a new service site at Muskegon Public Schools on board in September. From urban Flint and Detroit to rural Petoskey, FoodCorps Michigan stitches together diverse programs across the state that all have one thing in common: making children’s health a priority.

A few stories taken from this fall’s service in school classrooms and gardens highlight the impact that our FoodCorps MI service members are having in communities around the state.

From Alicia in Flint: "’You should try that green stuff. I didn't think I would like it, but I tried it and it was really good!’ Kid at the Fall Harvest Festival influencing peers to try things!”

From Brooke in Detroit: “I made zucchini noodles with tomato and spinach with a class and they loved them! Everyone came back for seconds. One student said, ‘I cannot believe I just ate three vegetables.’” 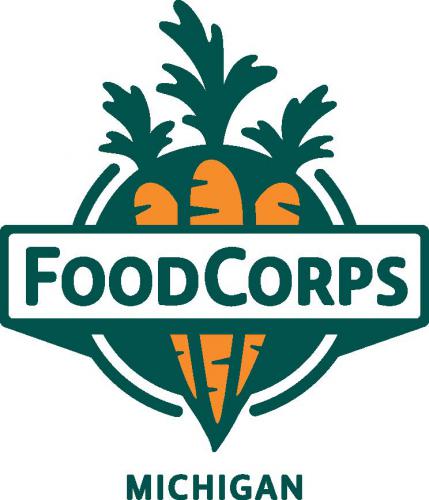