Based on past experience, black streak-susceptible celery cultivars have shown low symptoms if transplanted after the first half of June.

The major report of Black streak development in celery was in 2005 (Table 1). No data was collected that year due to the sudden appearance of the disorder. However, discussion with growers helped trace back potential causes of the problem and set up monitoring and research programs.

Based on work conducted from 2006 to 2010, we have developed a transplanting risk time zone for black streak development in celery. This risk time zone assumes the following conditions based on observations in 2005, 2006 and 2010:

Based on that information, the risk of developing black streak is highest for celery transplanted between May 25 and June 15 for susceptible cultivars, especially Dutchess (Figure 1). That corresponds to a crop that will mature between August 1 and early September, depending on the weather.

Susceptible celery cultivars transplanted during the high-risk period usually show symptoms at harvest (Figure 1). The first symptoms were reported on August 14, 2006, September 7, 2007, and July 27, 2010. The year 2010 was a very hot season, which justifies early appearance of the symptoms.

Our team will be monitoring the disorder and would like to receive any reports of symptom appearance at harvest by contacting Mathieu Ngouajio at 517-355-5191 ext. 1410. 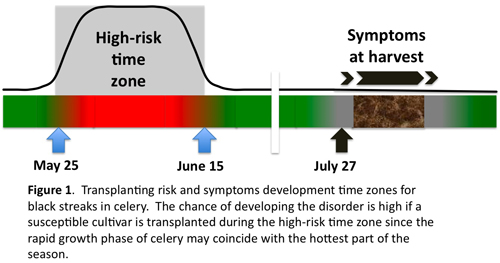