The tomato hornworm and the tobacco hornworm

There are a number of caterpillar pests of tomatoes in Michigan, but certainly the most well known and largest in size are two species of hornworms: the tomato hornworm, Manduca quinquemaculata, and the tobacco hornworm, Manduca sexta. The caterpillars, or larvae, of these two species are called hornworms because they possess a prominent “horn” on the hind end (see Images 1 and 2). These two species of caterpillars are exceptionally large when full grown; both develop to a length of three to four inches in approximately four weeks. Most of the time, both of these hornworm species are green. However, the tomato hornworm also occasionally occurs as a “black” or dark form. Besides tomato, these species also feed on pepper, potato, eggplant and some weeds of the nightshade family.

The caterpillars of tomato and tobacco hornworms both have five pairs of prolegs (note the large, fleshy prolegs on the tobacco hornworm in Image 2 being used to grip the leaf and stem of a tomato plant) and a horn on the last segment of the body. There are seven diagonal stripes on the sides of the tobacco hornworm, and its horn is usually red (Image 2). The tomato hornworm has V-shaped white markings on its sides, and the horn is frequently black (Image 1). The full grown caterpillars that develop in mid- to late summer pupate and overwinter as pupae in a chamber located between four to six inches below the soil surface. The adult moths emerge in mid- to late spring. The moths of both species are very large with wingspans of up to five inches (Image 3), and are capable of flying long distances. After mating, females lay small, pearl-like eggs individually on tomato foliage and leaves of other hosts. The caterpillars hatch and usually pass through five larval stages, or instars, in about one month. Fully grown larvae pupate in the soil. There are usually two generations produced each summer; larvae of the second generation overwinter as pupae.

Damage to tomato and related plants by hornworms

The hornworm adults are nectar feeders and do not harm tomato and other related plants. The caterpillars constitute the damaging stage of these insects. They initially feed on the upper portions of leaves and leave behind dark green or black droppings. The larvae are well camouflaged and blend in so well with the plant canopy that they often go undetected until damage to a plant is severe. Each large, late instar larva is capable of consuming several leaves, and larvae will also sometimes feed on green fruits.

Control of tomato and tobacco hornworms

In smaller plantings, handpicking the hornworms from the plants is a safe and effective control method. Roto-tilling the soil after fruit harvest is very effective, and tillage has been shown to destroy up to 90 percent of the caterpillars pupating in the soil.

The action threshold for hornworms is 0.5 small larvae per plant. If this caterpillar density is exceeded, an insecticide treatment is recommended. A large number of insecticides, including synthetic pyrethroids, carbaryl, spinosad, and formulations of Bacillus thuringiensis (Bt) are effective in controlling small hornworms. It is important to scout plantings to find the caterpillars when they are small; the larger the caterpillars, the more difficult it is to control the infestation. See MSU Extension’s Bulletin 312, “Insect, Disease and Nematode Control for Commercial Vegetables” for the current insecticide recommendations for hornworm control in commercial plantings.

Numerous natural factors help control populations of hornworms. Eggs and small larvae are often eaten by predatory insects, such as ladybeetles and green lacewings, and predatory wasps, such as paper wasps and yellowjackets, will kill hornworms and feed them to their larvae. The caterpillars are also attacked by small parasitic wasps, such as the wasp Cotesia congregatus. Larvae that hatch from the wasp eggs consume the internal organs and fluids of the caterpillar. When the wasp larvae complete their development, they form white, silken cocoons on the outside of the caterpillar’s body (Image 4). When the adult wasps emerge from the cocoons, the caterpillar will die. If these parasitized hornworms are seen in a garden or larger planting, they should be left to conserve the beneficial wasps. The wasps that emerge will find other hornworms to parasitize. 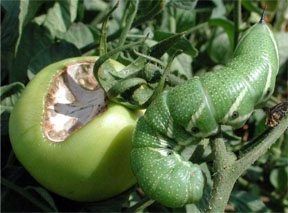 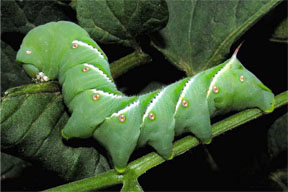 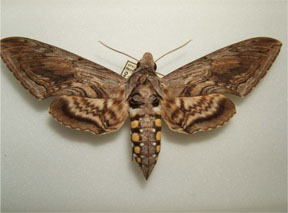 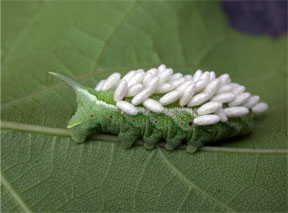