Editor’s note: If you also work with greenhouse production, please check out our Greenhouse Alert newsletter on the Internet at: http://ipm.msu.edu/greenhouseAlert.htm. The following article was published in our most recent issue. The Greenhouse Alert posts articles from December through early May and is a web-only publication.

Thielaviopsis has long been known in the greenhouse industry as a root rot pathogen that particularly affects pansies, petunias and vinca. Many perennials are also susceptible to this disease. Over the last year, I have seen an increasing number of perennials and woody ornamentals with Thielaviopsis, including Digitalis, Gaillardia, Geranium sp., Ilex, Leucanthemum, Phlox subulata, Phlox paniculata, Taxus cuspidata and Viola. Greenhouse growers, nurseries and landscapers working with perennials should be aware of this disease and the symptoms that it causes. 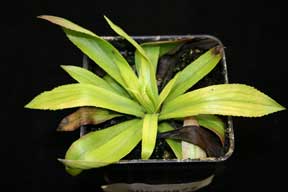 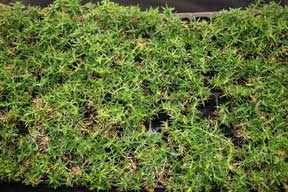 Thielaviopsis basicola is a fungus that infects roots of susceptible plants. Infection of the roots causes both above and below ground symptoms. Infected roots are darkly colored, hence the common name for the disease, black root rot. The dark coloration is created by the reproductive structures of the pathogen, which have a dark outer surface. Above ground symptoms are more readily noticeable and include chlorosis (yellowing), stunting, lack of vigor and plant death. Chlorosis caused by Thielaviopsis is easily mistaken for symptoms of a nutrient deficiency. However, unlike symptoms caused by a nutrient deficiency diseased plants do not respond positively to increased fertility. Infected woody ornamentals also develop chlorosis as well as defoliation after the root systems become significantly infected. Large or well established plants may not show obvious symptoms until the root systems are heavily infected.

Definitive diagnosis of this disease is not possible based exclusively on disease symptoms. Diagnosis requires microscopic evaluation of infected plants to confirm the presence of the reproductive structures (chlamydospores) on root tissue. This type of analysis can be readily done by any plant diagnostic lab.

Thielaviopsis is soil-borne, and the reproductive structures of this pathogen are well adapted to persist for several years in soil and plant debris, even without a live host plant. Soil conditions influence disease development. The disease is more severe in cool soils that have a pH range of 6 to 7. Observations suggest that wet soils are more conducive to disease development than dry soils.

Prevention is the best and most practical control strategy. Take the time to carefully inspect plant material when it is received and again when it is installed in a landscape. Randomly pick a few plants to remove from their containers and closely examine the root system. Diseased plant material should not be installed in the landscape as its condition will only deteriorate and soil at the site will become infested with the long-lived chlamydospores of this pathogen. Effective fungicide treatments options are available, but treatment is most efficient with plants that are still in containers at the greenhouse or nursery. On site, soil drench applications can be done, but these treatments are best when done preventatively rather than curatively.

When will the cool, wet weather end?