Time to prepare for fruitworm management in blueberries

The first cherry fruitworm moths were trapped last Friday, April 6, in monitoring traps placed in blueberry farms in Michigan’s Van Buren County. This first catch does not require immediate response, but signals the start of fruitworm management season. Cherry fruitworms and cranberry fruitworms are two early-season moth pests of blueberries in eastern North America. Both species have one generation per year and the female moths lay eggs during and after bloom, with cherry fruitworm activity being seven to 10 days earlier than cranberry fruitworm. The larvae of both species develop inside berries through the period of fruit development, and left unchecked these insects can infest 50 to 75 percent of clusters in areas of high populations. This causes risk of reduced yield and load rejection due to a very low tolerance for insects in fruit destined for the fresh or processing markets.

Effective management of fruitworms requires understanding how to monitor and scout for these insects, knowledge of their emergence and egglaying, and the performance of the available control options. Combining these approaches into an integrated pest management (IPM) program can help ensure that fruitworms do not cause economic losses. This article explains how to use the MSU degree day model for fruitworm management, and we report on some recent trials to test the performance of IPM programs that tested the degree day model and alternatives to Guthion (which is being phased out by September 2012). Blueberry growers have many alternatives available and should be testing alternative programs on their farms to be prepared for this change.

Traps for cherry and cranberry fruitworm should be in fields already to ensure accurate identification of the start of flight by these pests. This allows setting the biofix for running the degree day model to time insecticide applications (see below).

For both fruitworm species, we recommend placing monitoring traps in the upper third of the bush, with foliage cleared near the entrances. Field edges near woods or tree-lines tend to have the highest catches, so place traps near these areas or other historical hotspots for the greatest chance of catching moths. One trap per 10 acres is a minimum density to determine which fields have the most pressure and to detect differences in timing of emergence. The large plastic delta traps work well for monitoring both fruitworm species, but smaller Pherocon or wing traps can work too. The plastic delta traps are useful because they are highly resistant to rain, irrigation, and tractors, plus this design can usually be used for more than one year. As with all pheromone monitoring traps, be careful to bait the trap with the pheromone lure for the right species, and be sure to avoid cross-contamination with other species’ pheromone.

Some contaminant moths can be attracted to fruitworm traps in the spring, so be sure that the number counted is the right species. Photos of cherry fruitworm and cranberry fruitworm moths and the larvae are available on the Michigan Blueberry Facts website. Once the period of moth emergence is near (early bloom for cherry fruitworm, mid-bloom for cranberry fruitworm), traps should ideally be checked twice a week. This will help ensure accurate identification of the start of moth flight, or biofix. 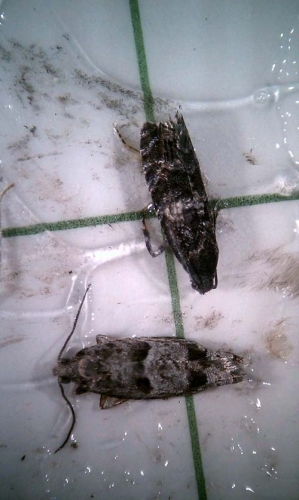 Cherry and cranberry fruitworm flights usually start during bloom in mid-May, with egglaying starting in late May during bloom when bee safety is a high priority. Farms with low fruitworm pressure can often get by with using an immediate post-bloom insecticide in early June as their first fruitworm spray. However, at fields and farms with higher pressure from these fruitworm pests, gaining high levels of control requires protection of berries using sprays applied during bloom. Sprays should ideally be applied based on the phenology of the pest, not the crop, which can vary widely among blueberry cultivars. Using degree days can help predict fruitworm phenology and identify the ideal times for sprays.

We have just started trapping cherry fruitworm moths in traps this past week, and when moths are trapped during two successive checks, set the date of sustained catch as biofix. During the past week, we have found the first cherry fruitworm moths in traps in Van Buren and Ottawa counties during our scouting. Scouts should be checking these traps carefully to set the biofix for this pest, and we also expect cranberry fruitworm traps to start catching moths soon, especially when the weather warms up again next week.

The activity of bees during bloom means that growers are restricted to only a few bee-safe products at the predicted start of egglaying: the insect growth regulators (IGRs) Intrepid or Confirm, and the biological insecticide B.t. Intrepid or Confirm must be applied close to the start of egglaying, which is timed by tracking growing degree days (GDDs) with a base temperature of 50°F. Egglaying is predicted to start at 85-100 GDD after the first sustained catch of cranberry fruitworm moths. For cherry fruitworm, it is not well understood how long after biofix egglaying starts. However, there is some guidance available from our recent trials in which Intrepid applied 100 GDD after biofix for cherry fruitworms worked well to control this pest.

The cranberry fruitworm model on Enviro-weather

The MSU Enviro-weather system can be used to track degree days for the weather station nearest to your farm. Click on the nearest weather station, select “Fruit” and then pick “Cranberry Fruitworm Model” from the list of available models (see image below). This will bring up a table that shows dates across the top and down the side. Select the date across the top when you set biofix for your farm (first sustained moth catch), and then look down the table to where it changes to red. This is the date when egglaying is predicted to start at that site. This model also predicts forward one week to show degree day accumulation and whether egglaying is expected in the coming days. 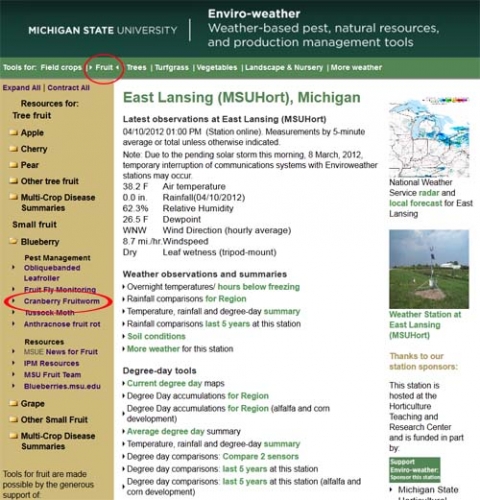 In bloom. Both species of fruitworms lay their eggs in the calyx cup of blueberries, so the risk from these pests starts when moths are present, egglaying is predicted, and petal fall has started. If these conditions are met, protection of the young fruit should be considered. If warm weather brings a new round of petal-fall, growers with fields at high risk of fruitworm infestation should consider protecting these newly-exposed fruit.

If cranberry fruitworm moths are trapped and 85-100 GDD have elapsed from biofix, young berries should be protected using an IGR such as Intrepid at 10-12 oz/acre. For organic growers using B.t. formulations such as Dipel at 1-2 lb/acre or Javelin at 1 lb/acre, applications should be timed for egg hatch, which is a little later than egglaying. Although we do not have our research on egg hatch timing completed yet, we expect that to be another 50-100 GDD later, equivalent to 135-200 GDD after biofix. Applications of B.t. last three to five days under typical spring conditions and they are not rainfast, so reapplication is critical for crop protection during this period. In contrast, Intrepid has 10 to 14 days residual control and is the preferred option for non-organic growers.

EPA has released new endangered species restrictions for Intrepid that cover Allegan, Monroe, Montcalm, Muskegon, Newaygo and Oceana counties in Michigan. This restriction states, “Do not apply this product within one mile of sandy habitats that support wild lupine plants...” See the Endangered Species Protection Bulletins website for details.

Post bloom. Guthion, Imidan, Asana, Danitol, Sevin, and Assail are all rated as being excellent broad-spectrum insecticide options for control of fruitworms. Lannate can provide high activity, but has shorter residual control. There have also been recent registrations of the reduced-risk insecticides Delegate, Rimon, and Avaunt that are registered for fruitworm and provide good levels of control. These also will control other pests; Delegate is labeled for control of fruitworms, leafrollers and for suppression of gall midge, maggot, and thrips; Rimon for fruitworms, spanworm, leafrollers and maggot; and Avaunt for fruitworms and spanworm, with activity also expected on plum curculio.

For any insecticide applied for fruitworm control, maintaining good coverage of the clusters is important to get residue to the parts of the berry where fruitworms are found such as in the calyx cup where eggs are laid. Because the larvae move over such a small distance before they enter the berries, it is important to use sufficient water and to consider spray additives (spreader-stickers) that will help spread the material across the berry surface. This is especially important for insecticides that need to be eaten for activity such as B.t. and Intrepid.

We have compared the level of fruitworm control at three, 1 to 9 acre fields in each of four commercial blueberry farms in southwest Michigan (two in Ottawa and two in Van Buren counties). At each farm, three fields with a history of fruitworm infestation were compared that received one of three programs comprised of insecticide applications at bloom, petal fall, and seven to 10 days after petal fall. The three programs were (rates are all per acre):

All three programs were very effective at protecting fruit from fruitworm damage. Single berry damage (indicative of cherry fruitworm damage or the early stages of cranberry fruitworm feeding) was lowest in program C, but this was not significantly different between programs:

Fruitworm management can be highly effective if regular checking of monitoring traps is combined with tracking of degree days and application of effective insecticides. Our recent studies have demonstrated the excellent control provided by Intrepid/Assail and Confirm/Asana programs for controlling fruitworms, providing alternatives for growers preparing for the loss of Guthion. There are other options available for growers to consider working into their IPM program while keeping resistance management in mind. Although the Intrepid/Assail program was more costly than the Guthion or Pyrethroid-based programs, insecticide costs of Assail and Intrepid are declining, and not all farms or fields will require three sprays for fruitworm control. Combining monitoring with degree days for accurate timing of early fruitworm sprays can help minimize economic losses to this complex of early-season moth pests.