Winter-killed and winter-injured apple trees exhibiting dieback symptoms have been observed throughout Michigan. Dead and dying apple trees and branches should be removed and burned as this tissue can be colonized by secondary fungal pathogens.

Winter injury or cold damage on apple trees is evident throughout Michigan as a result of the abnormally cold and long winter of 2013-2014. In the most severe cases, winter injury has resulted in tree death that became apparent when trees began to leaf out this spring. In other, less severe situations, affected trees look generally unhealthy as they head into the season—these trees may die later this summer, and if they survive, will remain weak for the remainder of their lives. We have commonly observed orchard blocks with collapsed, dying, or whole dead trees in orchards across the state. These trees collapse as the winter-killed stem tissue loses its ability to keep up with the physiological demands of the tree (Photos 1 and 2). 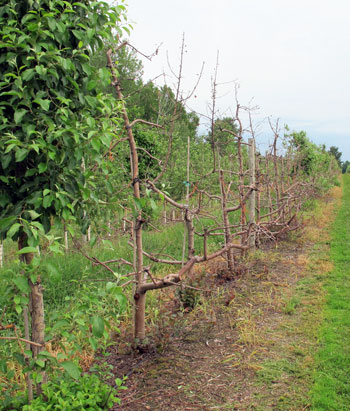 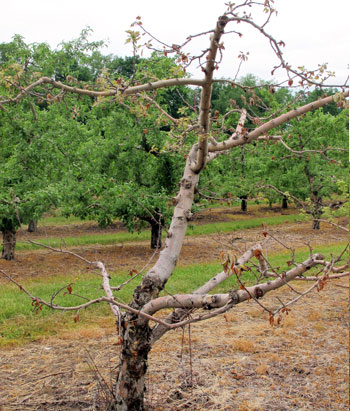 The other common symptom we have observed is when a portion of the tree is dead, and in many cases, the bottom scaffolds of the tree that were under the snow survived and any tissue above the snowline has died back (Photo 3). Winter-killed stem tissue appears discolored, can appear as an external “bruise”, and can be soft to the touch. Peeling away the bark tissue reveals brown, dead tissue in the inner stem (Photo 4), which is the source of the dieback above the killed area. 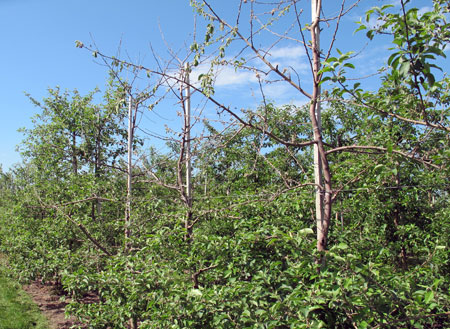 Many unique and interrelated factors have contributed to the winter injury this year. Because very cold minimum temperatures were common this winter, the tendency to isolate cold injury in traditionally low and "frosty" spots in orchards is not applicable this season. All trees in an orchard experienced extremely cold temperatures multiple times this past winter, which is likely why we are observing tree mortality throughout the block rather than just in the low spots. The worst problems may be associated with specific cultivars, as we have seen higher amounts of damage in Fuji and McIntosh on the Ridge and Jonagold, Mutsu, and Empire in Northwest Michigan. The dieback is also showing up at different times within blocks; this is likely the result of the injury within individual trees or the health of each tree as they headed into the winter. In cases where the injury was more severe, tree dieback has occurred earlier in the season. In orchards where the damage appears to be less severe, trees have leafed out and even flowered before they collapse. Over time, trees that were less severely impacted by cold temperatures will exhibit a general feature of declining health that can continue over the next few seasons and can still result in tree death. 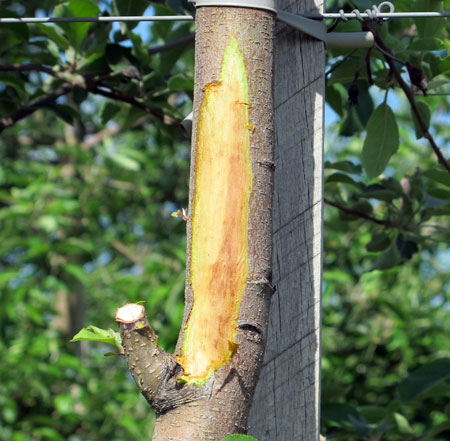 There are other factors contributing to the winter injury issues we have observed this year First, the heavy crop of 2013 weakened trees as they headed into the winter. Another potential issue is the late hardening off or lack of hardening off of trees going into winter. This is evident by the presence of 2013 leaves still clinging to the terminals. Trees that have been heavily fertilized, or over-fertilized, may have dormancy issues going into winter that are ultimately observed as winter injury. Also, last year there were numerous areas with a long summer drought contributing to the tree stress going into 2013’s fall dormancy.

Winter-killed tissue is an optimal habitat for secondary fungal pathogens, but we remind growers that these secondary fungi are not the primary cause of the dieback. Although these secondary pathogens are widespread in Michigan, we do not want to increase their establishment in Michigan orchards. For example, the black rot pathogen Botryosphaeria can be problematic if it is a constant presence in orchards because we can have later problems with black rot infection and rot in maturing fruit on particular cultivars. Therefore, we are recommending that winter-injured trees, or impacted branches, should be removed and burned to minimize infection by these secondary fungi.

Drs. Sundin and Rothwell’s work is funded in part by MSU’s AgBioResearch.