Recent heavy rains have led to localized flooding across Michigan. Homeowners with standing water in their backyards often worry if there will be long-term impacts on their trees. In addition, storm damage can also cause problems with downed trees and limbs.

For more information on how to manage damaged trees, see these articles from Michigan State University Extension.

Broad-leaved helleborine (Epipactis helleborine) is in the orchid family, Orchidaceae, and is sometimes referred to as a “weedy” orchid. Now is a good time to remove it in your landscape before it goes to seed. Make sure to get all the roots because any pieces left in the soil can sprout new plants. For more information on hellborine read “Homeowners battling a weedy orchid invading lawns and flowerbeds”.

The first symptoms of infection by the tar spot (Rhytisma spp.) fungus are now becoming noticeable on the leaves of maple trees. They are small, pale yellow spots. These spots will enlarge and the yellow color will intensify as the season progresses finally turning black by late summer, taking on the appearance of a “a spot of tar”.  It looks like we will see more trees with this fungus this year in areas with a rainy May and June. For more information on tar spot, see “Why do my maple leaves have spots?!”

Mid-summer damage from slugs is showing up on many garden plants. For more information, see “Slugs are making tracks on my garden favorites!” 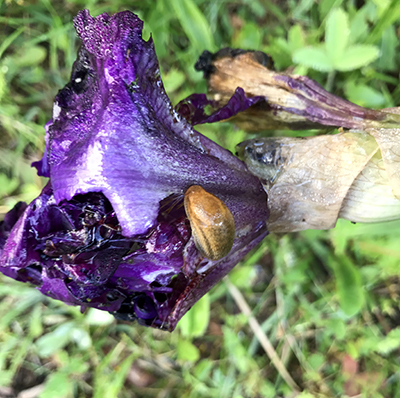 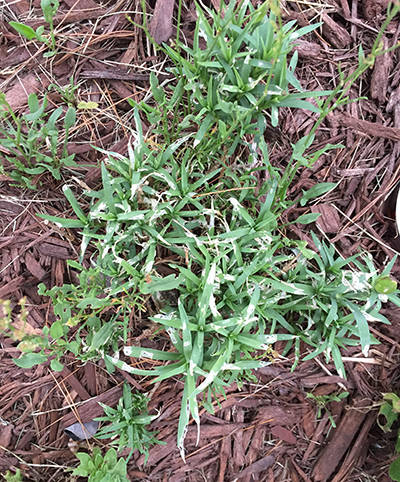 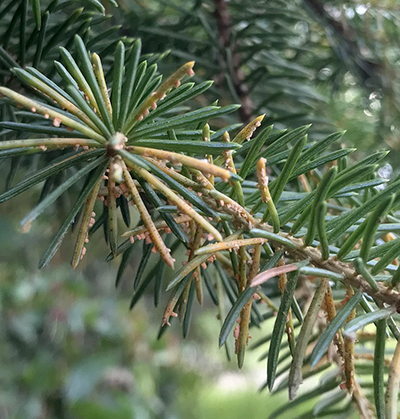 The following arthropods were of special concern during the past week.

Japanese beetles are out but in smaller numbers

The Japanese beetle, Popillia japonica (Coleoptera: Scarabaeidae) have been emerging over the past few weeks and are expected to peak this week or next. The beetles remain active until September. The good news is there appears to be fewer of them this year. Low numbers of Japanese beetle have been linked to hot, dry conditions during the previous summer. For more information on Japanese beetles, see the MSU Extension articles “The ups and downs of Japanese beetle populations” and “Why are we seeing so few Japanese beetles this summer?”

Others suggest the reason is the result of a fungal pathogen that was released a few years back. For whatever reason, gardeners across the Lower Peninsula are grateful.

Despite an overall downward trend in Japanese beetles numbers this year, there are probably areas where the beetles are numerous enough to cause serious plant injury. Japanese beetles is known to feed on over 300 plant species including fruits, vegetables, ornamentals, field and forage crops and weeds.

Susceptible plants can be protected with insecticide sprays. The best products for homeowners to use are cyfluthrin (sold as Bayer Advanced Vegetable and Garden Spray) or bifenthrin (sold as Ortho Bug-B-Gon). Neem oil or insecticidal soap may help to reduce the injury but these products will need to be reapplied much more often. Treating lawns to control Japanese beetle grubs with the aim of reducing the number of adult beetles feeding on ornamentals is not an effective strategy unless you are willing to treat all of the grass within a half mile of your house. Be sure to read and follow all instructions and safety precautions found on the label before using any pesticide. 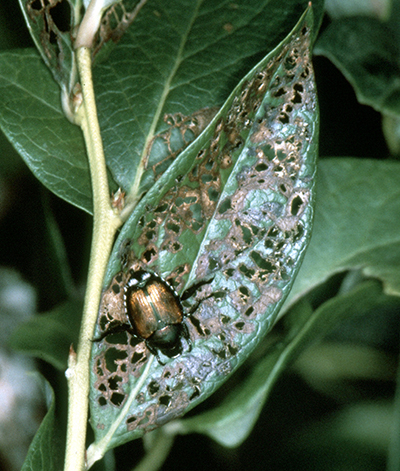 Michigan’s largest and most spectacular wasp is out and busy hunting cicadas to feed to their young. Known scientifically as Sphecius speciosus (Hymenoptera: Sphecidae), cicada killers occur in all states east of the Rocky Mountains. They raise their young in ground burrows, which they prefer to dig in sandy, bare, well-drained soil that is exposed to full sunlight. A mound of fine soil usually surrounds the burrow. The wasps feed on flower nectar while the immature or larval stages feed on cicadas that are provided to them by the female wasp. Like other solitary wasps with no large colony to defend, cicada killers usually ignore people as they go about their business of digging holes and hunting for cicadas.  Cicada killers should not be confused with Japanese hornets which have never been found in the U.S., so try to relax.

Read more than you will ever care to know about cicada killers at “Biology of Cicada Killer Wasps”. 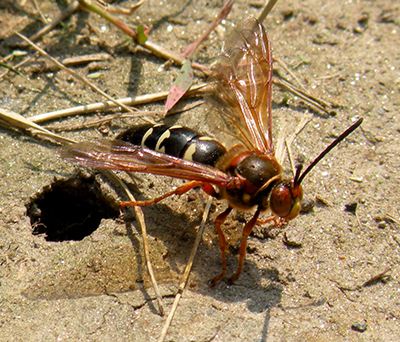 Several people contacted MSU Diagnostic Services this past week seeking information on strawberry root weevils, Otiorhynchus ovatus (Coleoptera: Curculionidae). These are perennial home invaders that show up in late June. They are harmless but become a household nuisance when they invade homes in enormous numbers. The weevil is about 0.25 inch long and dark brown in color. The abdomen is quite rounded and when viewed in profile and the weevil’s short snout can easily be seen. The larvae feed on small roots of wild and cultivated strawberries, brambles and some ornamental plants. Adult weevils are wingless and enter dwellings through loose fitting doors, windows, screens, and other small cracks and openings. They crawl everywhere through the home: bathrooms, cupboards, floors, walls and ceilings. The good news is that they don't do anything else. They don't bite or sting, eat your house or stored food, or infest your pets, or transmit diseases. They’re just a nuisance. 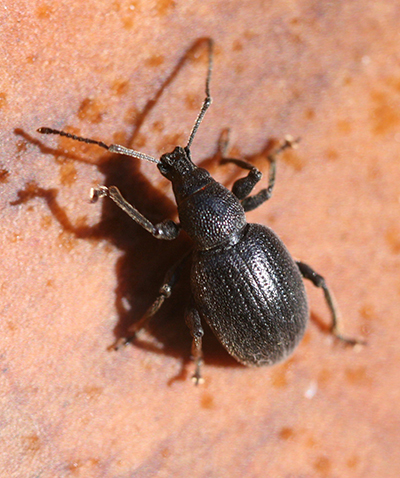