It is important to know when wild grape blooms in your vineyard so you know when to start degree-day accumulation.

We have been tracking the development of wild grape (Vitis riparia) across Michigan for the last several weeks, and we have now recorded bloom in all major grape growing regions. These dates are used as the starting point for the Michigan State University Enviroweather grape berry moth degree-day model. If you were not able to record wild grape bloom on your own farm, you can use the dates in Table 1 below as good local approximations. You will need this date for the biofix to run the model and determine when the mid-summer and late-season generations of grape berry moth are likely to begin laying eggs in your area.

Grape berry moth typically has three generations per season in southwest Michigan. Predicting when these occur can help growers target management at the right time to reduce infestation by this pest. Preventing the mid- and late-season infestation is most important, and accurate timing of controls is essential for effective management of grape berry moth. Controlling generation two (July) and three (August) is key to minimizing infestation at harvest time and reducing the cluster rots that can be associated with berry moth-infested clusters.

We have also shown that using Intrepid at 810 GDD and Altacor at 1620 GDD provides excellent control, plus the Altacor is active on Japanese beetle with equivalent performance to Capture (bifenthrin) in reducing foliage damage.

Most broad-spectrum contact insecticides (Imidan, pyrethroids, etc.) should be timed for when larvae hatch from eggs, which occurs about 100 GDD after eggs are laid. This makes the target times for broad-spectrum compounds 910 (second generation) and 1,720 GDD (third generation). These target timings will provide improved control because the insecticides applied for egg hatch will have greater residual activity during the period when grape berry moth are crawling on the surface of the berry before they start feeding. However, reapplication of these shorter-active chemicals may be needed to ensure growers protect their berries for the full activity periods of the second and third generations of grape berry moth.

Vitis riparia (riverbank grape) and Vitis aestivalis (summer grape). Use Vitis riparia for the grape berry moth model. This is the most common wild grape species. Leaves are green and glossy underneath and blooms before Concord varieties. The underside of leaves of Vitis aestivalis are whitish gray with hair. Every third leaf is without an opposing cluster or tendril. Vitis aestivalis blooms after Concord.

Vitis labrusca (Concord). Underside of leaves are whitish with hair. Every leaf has an opposing tendril or cluster, or nearly so.

Step 2. Go to MSU Enviroweather and select the nearest weather station to your farm. Select “Fruit,” then “Grape” and then “Grape Berry Moth” in the Pest Management section. A new page will appear with a table that has dates and daily degree-day totals on the left and wild grape bloom date across the top. 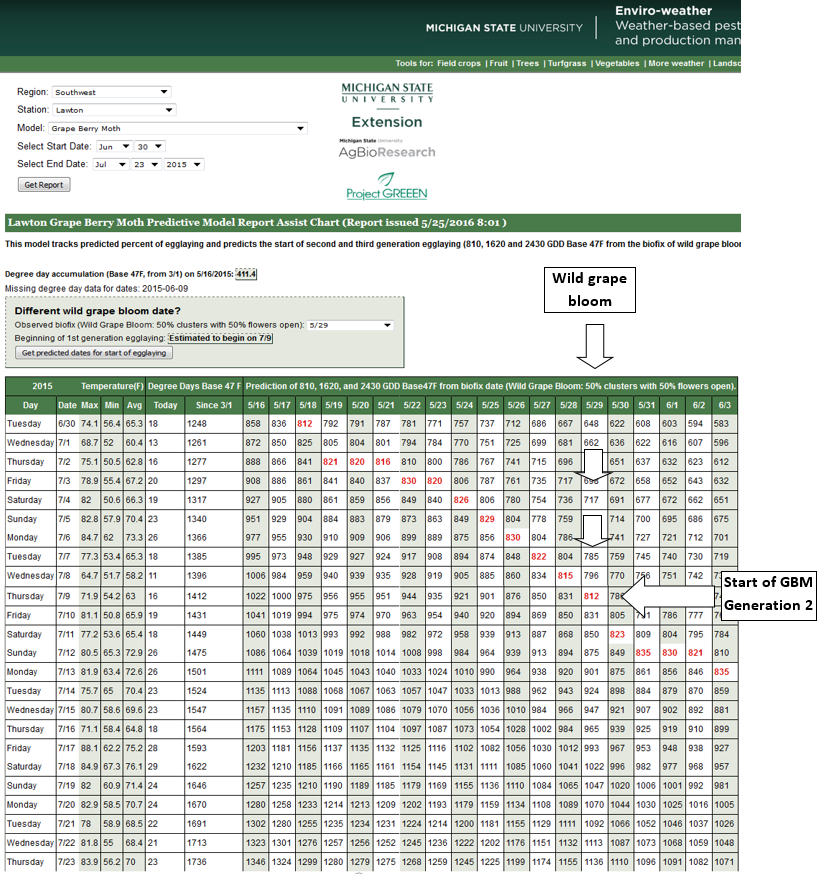 Step 4. Make management decisions. The model provides information on timing for the start of second and third grape berry moth generations, at 810 and 1,620 GDD. It does not tell you anything about the need for treatment. Those decisions need to be made based on pest scouting and vineyard history. For growers using growth regulator insecticides, application at 810 or 1,620 is appropriate. Use 910 and 1,720 for broad-spectrum insecticides to target egg-hatch.

If you decide to make an insecticide application to control the second or third generation of grape berry moth, be sure to get the spray well covered on the clusters. This may require higher water volume and spraying every row. If it doesn’t cover the clusters, it isn’t going to work for you!