The use of moth catches in pheromone traps for timing insecticide applications and assessing pest pressure is fundamental to orchard scouting and integrated pest management. Many factors affect the performance of trapping systems, and the usefulness of the information gathered. These factors are trap selection, trap placement and seasonal maintenance. Ignoring any one of these fundamentals will reduce the reliability of the whole trapping system.

Selecting a trap and lure

Every trap is composed of three essential components. The design of the trap, the pheromone baited lure and the sticky surface needed to retain the moths. The three most commonly used traps are the wing, large delta and diamond traps. Each can be an effective tool for monitoring fruit pests; however, the delta trap is probably the overall best option. Since the trap is made of a durable plastic it can be used for several seasons, if used to monitor the same pest species. The trapping area is a sticky insert that can be removed to count moths and is easily replaced if needed. Trap comparisons have consistently revealed that the delta trap catches at least 30 percent more moths than other traps, primarily because it has a larger trapping surface than other traps. The ability to trap as many moths as possible is especially important in situations where catches are typically low, such as when monitoring mating disrupted orchards.

There are also many lures to choose from. The most commonly used lure is the red septum. A septum loaded with 0.1 mg of a 3-component pheromone blend is a very effective lure for monitoring Oriental fruit moth in both disrupted and non-disrupted orchards. A red septum loaded with 1 mg of codlemone has been the fruit industry standard for monitoring codling moth in insecticide-treated orchards. However, recent studies have demonstrated that the performance of this lure declines after about three weeks in the spring and two weeks in the summer. Changing lures this often is difficult and expensive, thus some longer-lasting lures have been developed. These include the L2 (Trécé Inc) and Biolure CM1x (Suterra) lures that may last six or more weeks.

Lures releasing a high rate of pheromone are often used to monitor codling moth in mating disrupted orchards. A red septum loaded with 10 mg of pheromone has been the industry standard. As with the 1x red septum, the performance of the 10x version declines over a period of two to three weeks. High load lures that last at least six weeks have been developed and include the superlure or ‘bubble lure’ (PheroTech Inc.), the megalure (Trécé Inc) and the Biolure CM1ox (Suterra, LLC). For all high-load lures, however, moth captures are not a reliable indicator of population densities in orchards. Trapping should be used in conjunction with visual inspection for signs of codling moth infestation. Concentrate your search for fruit injury in the upper canopy, along orchard borders, near bin or prop piles and in the most susceptible varieties, such as golden delicious.

Monitoring with other attractants – The DA and CM/DA Lures

In 1998, Dr. Doug Light, USDA-ARS scientist in Albany California, discovered a compound that is attractive to both male and female codling moths. The attractive chemical is an ester that is present in the odor of ripe Bartlett pears. This pear ester is a stable compound that can be readily synthesized and loaded into a rubber septum to make a lure for monitoring codling moth. Trécé Incorporated produces a lure based on this chemistry that is commonly referred to as the DA lure. They also produce a combination lure that contains both codling moth pheromone and the pear ester that is referred to as the CM/DA lure.

The possible advantages of the DA-based lures over the sex pheromone lure are 1) they attract females and thus moth catch is more directly linked to egg laying and the potential for worms in the fruit, and 2) attraction does not appear to be impeded or suppressed by pheromone-based mating disruption. Scientists, including our MSU group, have been evaluating the performance of the DA and CM/DA lures for the past few years, and, in general, the results have been promising, but variable. We have had the best results using the CM/DA lure. This “combo’ lure has proved quite useful as a monitoring device in orchards that are treated with a codling moth mating disruption product. In particular, it provides a means of monitoring codling moth flight in orchards treated with pheromone, and thus to best time the application of any supplemental insecticides that are needed.

Making management decisions using information obtained from poorly maintained traps can be a recipe for disaster. The effectiveness of the trap depends on maintaining the trap shape, the quality of the adhesive over the season, and good accessibility to attracted moths. Two common problems with trap shape are failure to return side flaps to the upright position of the large delta trap, and not maintaining the proper entrance space in the wing trap after the traps are checked. Leaves, twigs, and moth scales can foul the adhesive bottom of traps over time. Each time traps are checked; debris, moths, and other insects should be removed. The adhesive should be redistributed. A general guideline for replacing trap bottoms is at least once per generation or when the surface has been fouled sufficiently to prevent routine capture. And finally, after hanging the trap be sure that leaves and branches are cleared from around the trap entrances. Any interference with the moth’s ability to enter the trap will greatly reduce captures. Lures should not be handled with bare hands. Gloves, sticks, or an instrument (with acetone dip) can be used, but whatever tool is chosen, pheromone cross-contamination when working with lures for different moth species must be avoided. Replacement of lures for most species is between generations, except for codling moth, which may require more frequent changes. Check with the manufacturer for lure specific recommendations. Spent lures as well as new lure packaging must be removed from the orchard. A trap should never have more than one lure at a time.

Trap placement is a critical factor for optimizing trap performance. The key decisions are 1) how many traps to deploy, 2) where to place them in the orchard, and 3) location of the trap within the tree. There is no way to avoid the fact that deploying more traps will increase the reliability of the information gathered. The trapping range of an individual trap varies depending on the species being monitored and whether the block is treated with mating disruption. Moth species vary in their response to pheromone lures; therefore the number of traps needed ranges from 1 to 4 per ten-acre block. The extremes can be represented by Oriental fruit moth at 1 trap per ten acres and codling moth in a pheromone treated block at 4 traps per ten acres. These numbers are actually a compromise between accurate monitoring and what is practical. For example, each trap in a codling moth disrupted orchard assesses activity in less than 0.5 acre, probably closer to 0.1 acre. Thus, a trapping density of 1 per 2.5 acres is already stretching things. The key considerations for effective trap placement within a block given these considerations are 1) historical “hot spots,” and 2) location relative to block perimeter. An area where moth catches from previous seasons were high, or a “hot spot,” is a good place to locate a trap. A “hot spot” does not represent pest pressure in the whole orchard; thus traps should also be placed elsewhere. Avoid placing traps on the perimeter row. Instead place traps at least 3 to 4 rows in. Placing traps well within the orchard will increase the likelihood of capturing local moths, rather than your neighbors’.

The location of the trap within the tree is the third critical factor. A trap needs to be located where moth activity is greatest and placed in a way that allows moths easy access to the trap. For most insects, the trap can be placed in the middle third of the canopy. Truck window height is not acceptable. The height that a trap is placed is especially important for codling moth. Riedl et al. (1979) demonstrated that catches of male codling moth varied substantially depending on trap location in the tree canopy (Figure 1). Higher catches were recorded in the upper compared to lower canopy positions. Very few moths were captured above or below the canopy. For monitoring codling moth in a pheromone-disrupted orchard, the trap needs to be placed in the upper third of the canopy. This increases the likelihood of capturing moths in an environment in which male orientation to pheromone sources is severely impeded.

A bamboo or PVC pole can be used to position the trap high in the canopy .For small to medium-sized trees a 5-6 foot pole will suffice, but 8-foot poles are required for trees with canopy heights of 14 feet or greater. The trap is fastened to the end of the pole by slipping the trap’s wire hanger through a hole drilled near the end of the pole, and then wrapping the wire back around itself to prevent it from being dislodged in strong winds. The trap and wire hanger can then be easily slipped over a branch high in the canopy. The trap entrances should be cleared of foliage so that moths can readily access the trap. This can be accomplished using a pole pruner when the traps are first placed in the trees, with periodic maintenance through the season as the foliage grows. 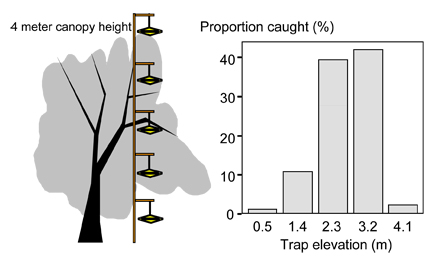