Reprinted with permission from Branching Out, An IPM Newsletter for Trees and Shrubs, Vol 14, No.7 http://branchingout.cornell.edu/. This article was originally printed in the July 13, 2007 issue of the Landscape Alert.

Verticillium wilt (120,121) is caused by a soil-borne fungus, Verticillium dahliae that commonly attacks maples, especially Norway maple, as well as about 45 other woody plants in the Northeast. Verticillium does not affect yews and conifers. V. dahliae survives in the soil as clusters of thick-walled cells known as “microsclerotia.” Microsclerotia are extremely resistant to drought and cold and can survive for a decade or more as dormant propagules just waiting for exudates from a suitable host to wake them up. Then they germinate much like a normal fungus spore and infect plants through the roots. Once in the vascular system, the fungus grows up into the stem and branches, plugging the vessels as it goes and eventually causing leaf wilt and branch death.

Symptoms of verticillium wilt can be confusing because they are so variable. They include marginal scorch and complete wilting of leaves on individual branches in the crowns of potential hosts. Symptoms can occur at any time of the year but often show up when hot, dry weather begins.

Sometimes a single branch or the foliage on one side of a tree will die. Trees can go through years where no symptoms are present and then the symptoms show up again several years later. Some trees can struggle along for years, while others may die soon after symptoms appear. In addition to wilting, other symptoms may include: small leaves, stunting shoot growth, poor radial growth, sparse foliage and abnormally large seed crops. (view photos below)

There are many other factors that can cause leaf wilt and branch dieback. In general, adverse site conditions and environmental stress such as girdling root injury, drought, flooding, compaction, deicing salts or gas leaks can cause symptoms similar to verticillium. In addition, canker-causing fungi that grow through the bark and cambium to almost girdle a branch can cause wilting. Bark beetles, wood boring insects or sapsuckers can attack selected branches in a tree and cause enough girdling to result in branch failure as well. The question of whether the cause is verticillium or something else is best answered by having the sample tested.

One reasonably reliable diagnostic feature is that sapwood plugged by verticillium may be stained green (in maples) or brown (in other species). However, this discoloration is not always easy to find because it may occur up to several feet below the point where leaves are actually wilting. If you suspect verticillium, begin looking for the stain in the outer sapwood of wilting branches, but if it’s not there, continue removing small pieces of bark to expose sapwood closer to the main stem. You may have to examine portions of the tree all the way back to the junction of the suspect branch with the main stem. The vascular discoloration can vary in prominence depending on tree species and sometimes isn’t visible at all, especially on young twigs.

Conclusive diagnosis of verticillium requires laboratory culture of the pathogen from symptomatic wood. Other injuries to wood can also cause vascular discoloration. Don’t be too hasty to make the conclusion that verticillium is the cause, because if it isn’t, decisions about management and selection of replacement trees will be quite different. The Plant Disease Diagnostic Lab at Cornell, as well as diagnostic laboratories at other state universities, are able to provide this service - sometimes for a modest fee. Fortunately, verticillium doesn’t colonize its hosts with the speed that some other pathogens, like Dutch elm disease, do. There is time to do the culture, get the results and then plan a course of action. The sample you send to the lab should preferably be a 1 inch or larger diameter symptomatic branch (but NOT DEAD) that is 8-12 inches long.

V. dahliae can persist in the soil as resting structures called “microsclerotia” for many years without a host. When roots of a potential host are placed near the fungus, exudates from those roots stimulate the microsclerotia to germinate, and the fungus attempts to invade the plant. Wounded roots are especially likely to be colonized.

Once infection has occurred, verticillium grows upward within the xylem vessels (the vascular tissue that transports water) of its host, causing the plugging that eventually leads to wilt. It apparently does not grow well from one growth ring to the next, so new vascular tissue, including that surrounding previously infected wood, must usually be colonized by new root infections each year.

The microsclerotia, however, do function as large, durable spores and can be spread in contaminated soil, on infected roots, or even in some infected fruit.

There is no fungicide treatment available to control verticillium wilt. However, some other measures may be taken to prolong the life and to improve the aesthetic value of an infected tree. Management of this disease includes proper pruning, watering and fertilizing. If so little of the crown is affected that branch removal will still leave an acceptable specimen then prune symptomatic branches back to their junction with the next largest asymptomatic branch. Severely infected trees, which would be unacceptable as landscape specimens after symptomatic branches are pruned, might just as well be removed completely.

Water during dry periods, especially if they occur in summer or fall. Fertilize if needed with a low nitrogen, high potassium fertilizer. Excessive fertilization apparently increases problems with this disease.

Do not replant in the same site with a verticillum-susceptible species because the fungus can survive in the soil for years. Instead, choose resistant or immune trees such as birch, ginkgo, sweetgum, mulberry, willow, hornbeam, hawthorn, honeylocust, crabapple, London plane, oak or mountain ash. Also, where maples are desired, be aware that red and sugar maples are more resistant than silver or Norway maples. Of the Norway maples, ‘Jade Glen’ and ‘Parkway’ have shown more resistance than other cultivars of the species.

There is no guaranteed way to get rid of the fungus once the soil has been colonized. Where the disease has been confirmed and the tree has been killed, replacement with a verticillium-resistant tree may be the only feasible option.

Colleagues at the University of Wisconsin have looked at potential hazards associated with use of wood chip mulch from trees infected with Verticillium dahliae. They discovered that the pathogen will survive in chips for up to one year, albeit at relatively low levels. Furthermore, 13 months after Amur maple, green ash, and redbud saplings were planted in a potting mix amended with chips from a verticillium-infected tree, up to 28 percent of the trees became diseased. While there are still considerable differences between the “real world” application of wood chip mulch and the parameters used in these experiments, the threat of the chips is of sufficient concern that arborists are advised not to incorporate debris from verticillium-infected trees into chip piles planned for landscape use.

Verticillium as a bioherbicide?

Our colleagues at Penn State have recently made the intriguing discovery that verticillium wilt can be a devastating disease on invasive Tree-of-Heaven (Ailanthus altissima) in forest stands and Christmas tree plantations. In fact, preliminary results suggest that the pathogen may be far superior to traditional herbicides for suppression of the “weeds”. So far, there appear to be no adverse effects on maples, oaks, cherries and other desirable species, but additional work is needed to confirm that a purposeful introduction of verticillium would be safe for non-target organisms. 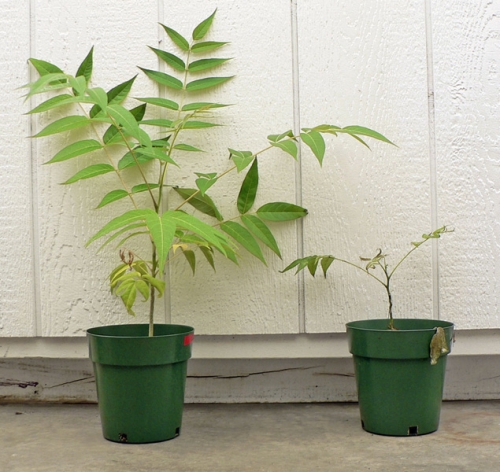 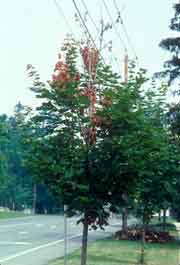 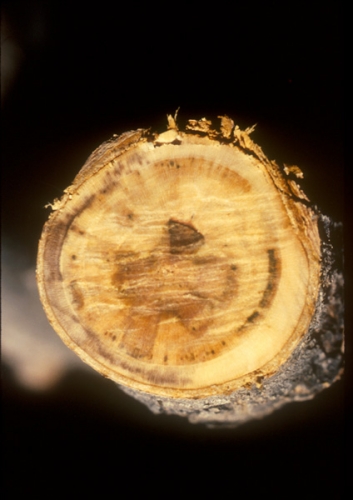 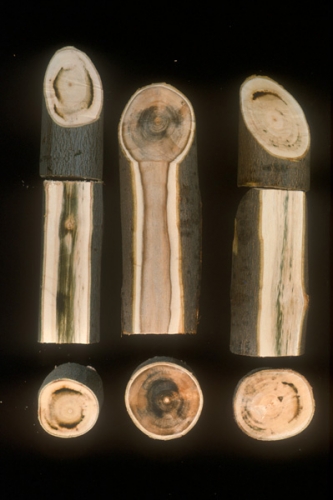