Western bean cutworm moth catch increased at many locations, and egg masses were found in corn in west and central Michigan (Note the highest trap catch was reported in southwest counties this week, but no one has called in with reports of egg masses – they are surely there.). But remember in corn, the absolute number of moths does not necessarily predict egglaying in a field. Egg masses will be primarily on pre-tassel plants or plants just tasseling. Even if there are hundreds of moths caught nearby, if the field is not in an attractive stage, females will lay eggs elsewhere.

Dry beans are more of a puzzle since the canopy is not closed in some fields. Last week, we found that egg masses didn’t hatch when pinned in short, late-planted beans lacking a canopy, likely due to extreme heat coming off the soil. It is doubtful a female moth would even choose such a field for egglaying. However, for early-planted fields with a lot of growth (nearly closed canopy), especially if irrigated and a high trap catch nearby, I suggest a spray window starting at the end of this week in central Michigan and the Upper Peninsula. The insecticide will kill any young larvae in the canopy, and the residue will kill larvae hatching for another seven days. We’ll have to keep an eye on the shorter, dry land beans for the next few weeks to see if those fields should also be treated. 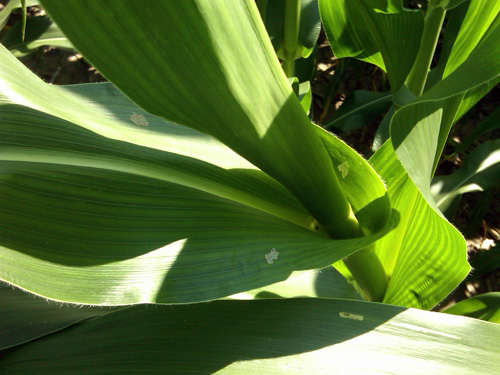 New egg mass continue to be deposited in pre-tassel corn. 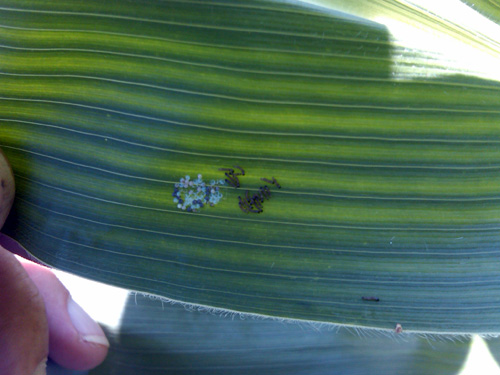 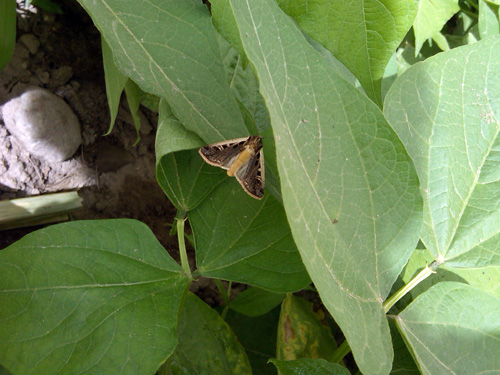 Adult western bean cutworm moths fly at night and seek refuge in corn whorls or bean
canopies during the day.