What’s that growing on my tree?

Lichens are common and highly variable life forms. They are a symbiotic association between a fungus and an alga or bacterium. They grow in a wide range of environments, on many substrates.

Ever notice something growing on the trunk of a tree? Mosses are common but seldom generate concern. Although, the microclimates of tree trunks can produce some intriguing life forms. In addition to mosses are many common lichens (pronounced LIE-kins), which are sometimes mis-identified as mosses or harmful fungi.

Lichens are a weird classification of living things, partly defined by what they are not. They are not plants. They do not have roots, leaves, or flowers.  Lichens defy absolute descriptions.

Lichens have curious relationships, often complex and variable. Basically, a specialized fungus provides shelter for either a species of green algae or blue-green bacteria (or both, in some cases!).  In turn, the algae/bacteria provide food and energy to the fungus via photosynthesis. These algae or bacteria grow within the fungal filaments. Lichens are different from either of their constituent parts. 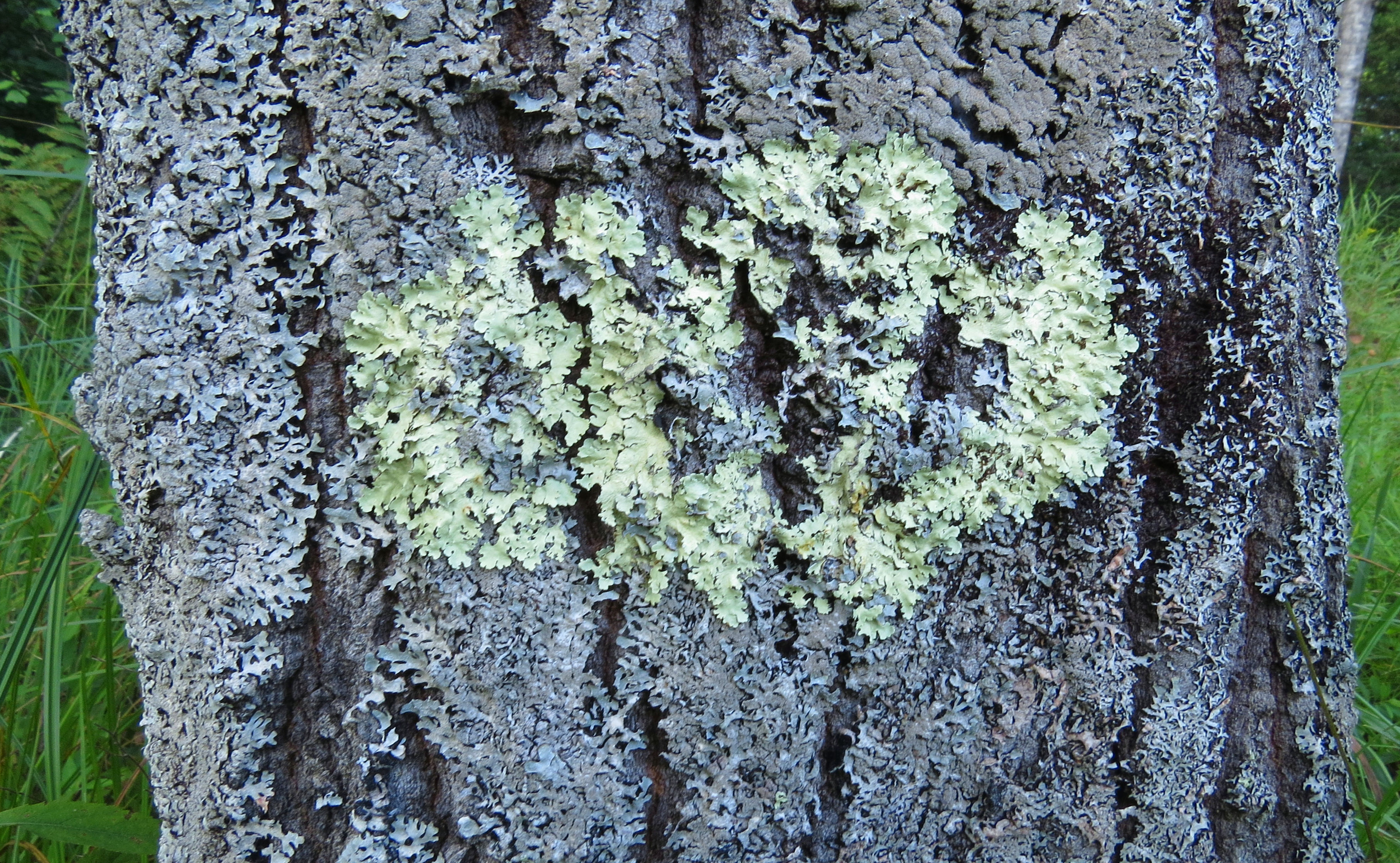 Lichens are not parasites on trees or other plants. Lichens use tree trunks merely as a substrate, or a place to grow. They’ll grow on rocks, buildings, and other structures, too.

Worldwide, there are thousands of lichen species. They can occupy some fairly extreme environments. Lichens are long-lived and slow-growing.  There’s an entire science involving lichens. They are classified by the shape and size of the non-reproductive structures, the “thallus” (not a term unique to lichens). Lichen biology has its own lexicon of unique terms.

Lichen taxonomy is largely based on the constituent fungus. Sometimes, the same fungus will harbor different species of algae. It’s the fungus that also produces the fruiting bodies, which produce spores. Identification to the species level may require the application of certain chemicals to see how the lichen color reacts. Needless to say, lichen ID isn’t always easy.

The more common lichen types in the Great Lakes area are grouped by “fruticose”, “foliose” and “crustose” appearances. The fruticose lichens are branched or tubed, and resemble mosses. The foliose appear flattened or leafy, and the crustose, as the name implies, are crusty. Most are pale green or brownish-green. Some are orange or yellow. However, the variety of appearances ranges widely. 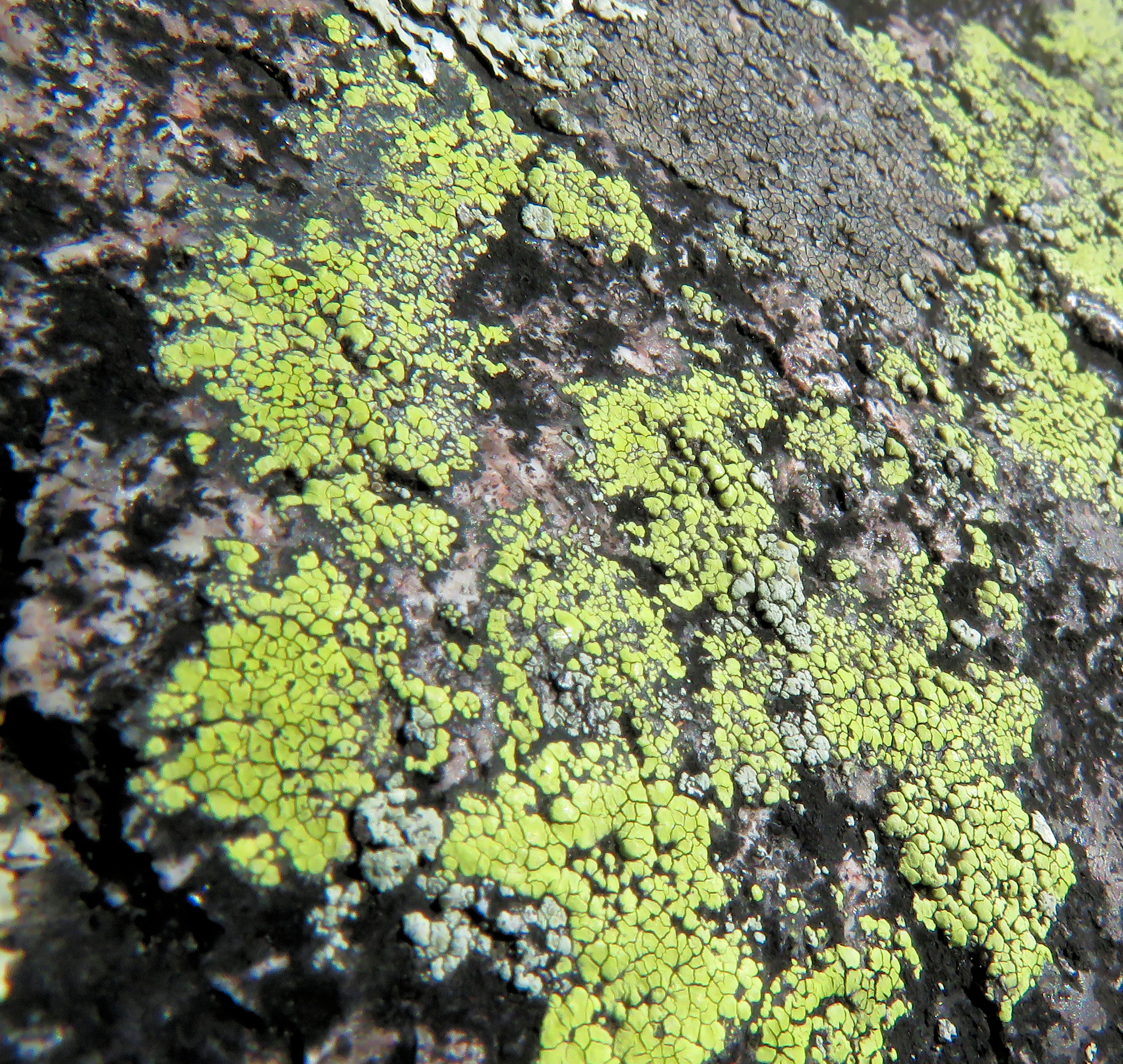 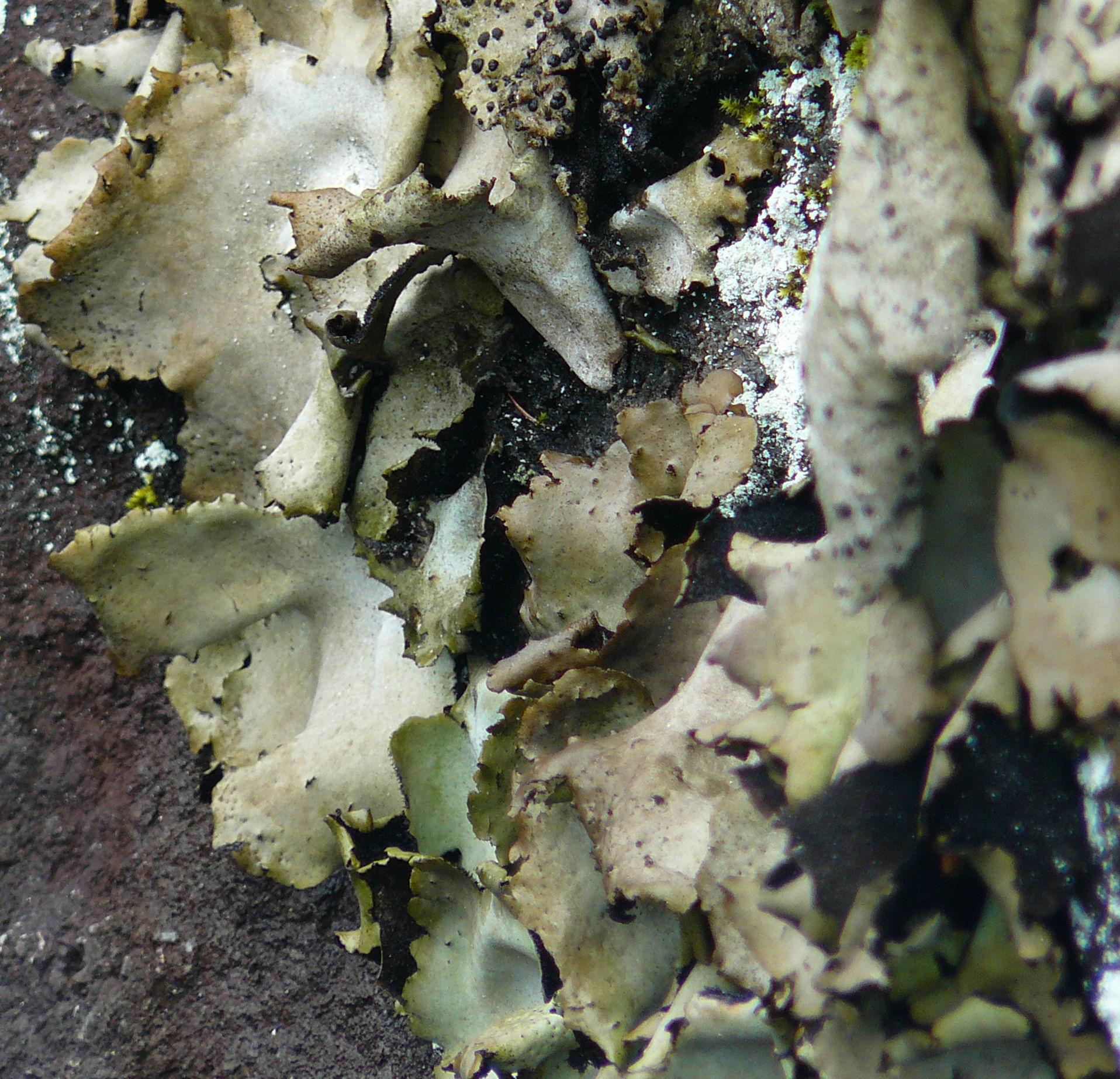 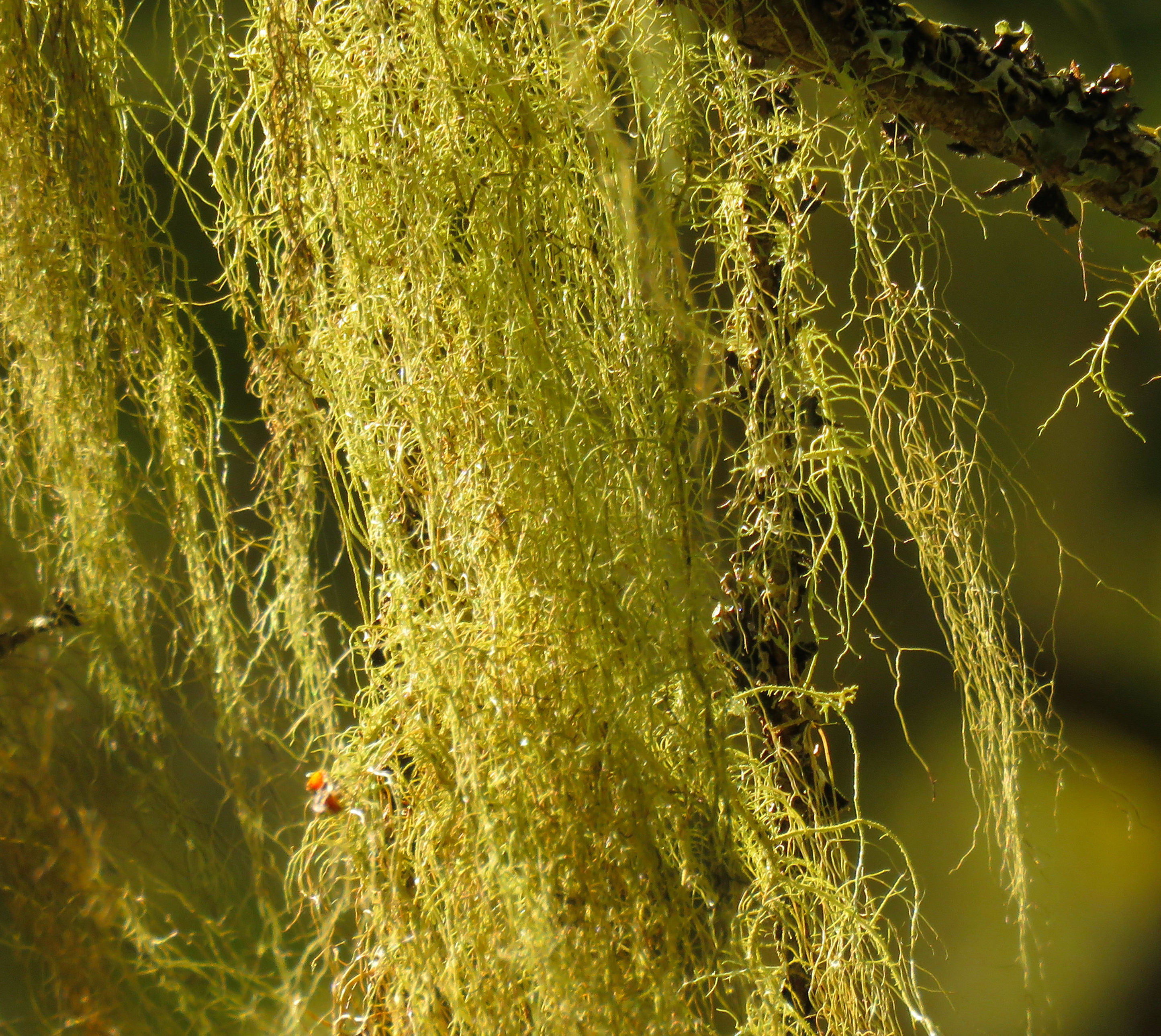 The “green fungus” on a tree is usually a foliose or crustose lichen, often the genus Flavoparmelia. Again, harmless to the tree, although it’s been argued only an ailing tree grows bark slow enough to accommodate lichens.

The leafier lichen forms are often indicators of good air quality. These lichens decline or die when air becomes polluted with components such as sulfur or ozone. However, some of the crustose lichens may actually fare better in these environments.

Lichens are highly vulnerable to dry conditions, as they cannot control water loss.  They will “come alive” and “go dormant” depending on moisture conditions. Pale, brittle lichen usually suggests a dormant state. Lichens with pliable thalli that are dark brown or dark green suggest that they’re actively growing.

The thalloid liverworts resemble foliose lichens. In fact, the green structures of this liverwort subgroup are also called thalli. Some of the mosses resemble lichens, too. However, without much practice, it’s usually pretty easy to identify a lichen as a lichen.

Lichens are one more intriguing and fascinating element of our northern forests. 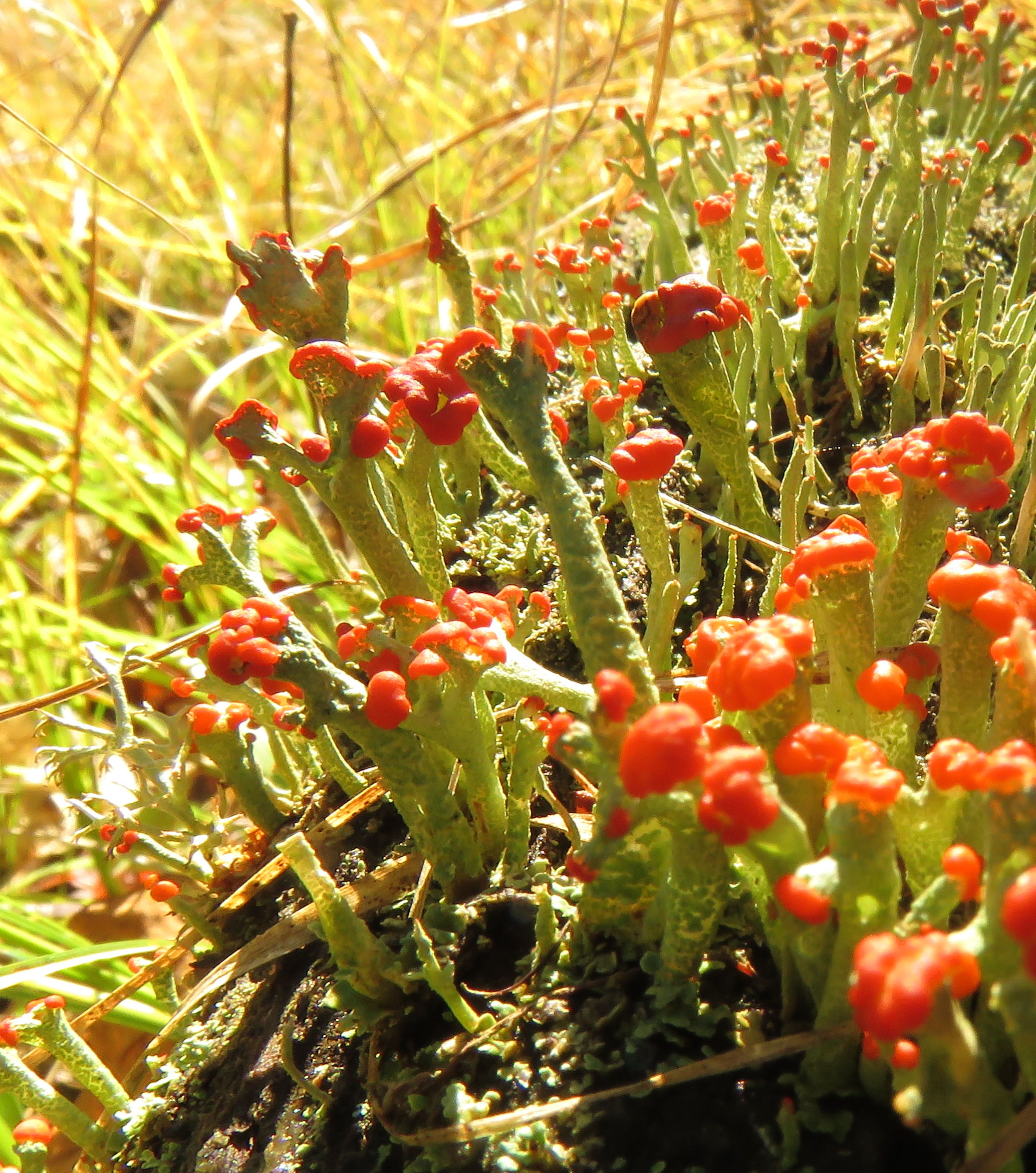