What are these bumps on my vegetables?

Edema or oedema: It doesn’t matter how you spell it, it still doesn’t look good. What is it, what causes it and how can I prevent it?

Plant edema (sometimes spelled oedema) is an occasional problem on several crop species. In vegetables, I have seen it most often on pumpkins, squash and cole crops, but it can occur on many horticultural crops and on almost any part of the plant. On vine crops it most often appears on the fruit surface in contact with the ground (Photo 1). In cole crops and other species, it is usually on the leaves. In all cases, edema has the appearance of raised, wart-like bumps varying in size (Photos 1-2). They may become large enough that they appear to be a solid mass as on the pumpkin in Photo 1.

Edema appears more often in cool, wet growing years and is therefore wrongly confused to be a disease exacerbated by weather conditions. Even though it is not a disease, excess water is the clue to its cause. Under periods of excess moisture, plants can take up more water than what they can use and under cool conditions they can’t turn it into more plant or fruit and are not able to transpire it through the leaves. However, they still have to do something with it!

As the plant cells fill with water they can’t get rid of, they enlarge and eventually burst. After bursting, the wounded tissue heals and forms a dry, corky area. The damage is generally only superficial, but greatly affects visual quality. Not too serious on pumpkin or squash fruit, but very serious on collard greens or kale. Edema will eventually stop appearing on new growth if the weather warms or turns dry, but it will not disappear on already affected tissue. If edema occurs under conditions other than cool, cloudy and wet, then most likely you need to take a good look at your irrigation practices and adjust them. 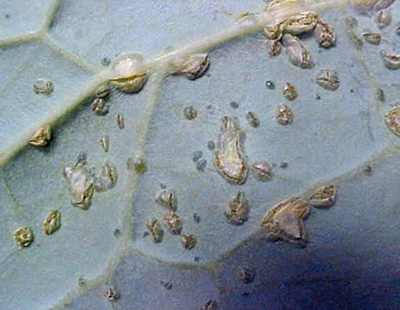 Edema could also be an indicator of wet spots in your fields. If your pumpkin and squash fruit have a significant amount of edema on the ground side in a certain field, or from a certain spot in a field, that might be an indication to either install tile to improve drainage or to avoid the field entirely. Which in the case of vine crops would be a good idea given the diseases they could get under those conditions.

If you have further questions concerning edema or other commercial vegetable production issues, contact your local Michigan State University Extension office or Ron Goldy at goldy@anr.msu.edu.