What are those dead grass tips in my lawn?

Some turfgrass was injured as a result of freezing temperatures last week, but the injury is only temporary. Dead grass tips may be from frost, a dull mower blade or chemicals.

Across many areas of Michigan, nighttime low temperatures dipped into the mid-to high 20s on Monday morning, May 13, 2013. While this event didn’t appear to be a serious killing event for many ornamentals, I have observed some interesting freeze injury on turfgrasses.

My experience with this type of freezing event is that the symptoms mimic foliar burn from a fertilizer or pesticide application (Photo 1). The visual symptoms to look for are on the leaf blade, as advised by Michigan State University Extension. If you look closely, you’ll notice the old leaf blades were burned or discolored from the leaf tip down about an inch (Photo 2). Typically, this damage is observed on higher cut turf, i.e., lawn height, and will disappear with new emerging growth and the next mowing. 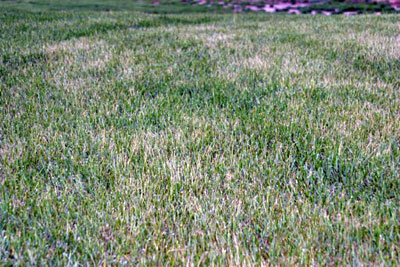 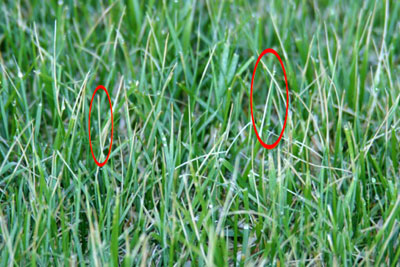 In addition to the typical burning look on the leaf tips, I’ve also observed some very interesting freeze injury symptoms on different species. Tall fescue clumps contaminating a Kentucky bluegrass turf displayed freeze damage much greater than the bluegrass to the point it looks like someone sprayed them with Round Up (Photo 3). 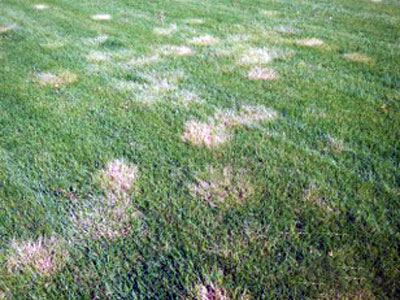 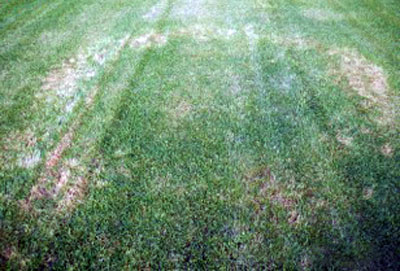 One type of freeze injury that brought a smile to my face was viewing the tip of quackgrass leaf blades burned down at least a couple inches from the freezing temperatures (Photo 5). Unfortunately, I doubt this will slow down the quackgrass for very long. 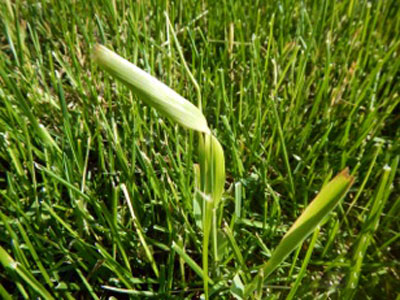 My theory for the damage to the fescue clumps, fairy ring and quackgrass are that any rapidly growing, young leaves were more susceptible to freeze injury than the slower growing or mature leaves. Observing these symptoms also made me think about winterkill and late fall fertilizer applications. One of the risks with late fall fertilizer applications has always been if temperatures warm up following the application and cause a resumption in top growth. When turf is in an actively growing state and experiences a rapid temperature drop, it will not just burn back some leaf blades, but potentially kill the plant.

Pinkish-red strands in grass could be red thread