What is reactive N and why should I care?

The many other forms of N in the environment, including ammonia (NH3), ammonium (NH4), nitrite (NO2) and nitrate (NO3), nitric oxide (NO) and nitrous oxide (N2O) are collectively referred to as reactive N or Nr. These forms of N are all interrelated and are constantly in flux in the environment. Learning to recognize and manage these changes has future implications for agriculture (see chart 1).

Through the conversion of N2 to NH3 and NH4 (ammonia and ammonium), N becomes available for life uses. This conversion of N2 to its ammonia forms takes place under two natural processes: 1) N2 is converted to NH4 by bacteria living in the nodules of legume plants (clovers, alfalfa, beans, peas) and 2) a burst of energy from a bolt of lightning converts N2 to NH4. (Vitousek, 1997). In the early 20th century the advent of the Harber (or Harber-Bosch) process for converting N2 to NH3 was commercially adopted and the manufacture of commercial N fertilizers began. Each process requires significant inputs, either bacterial or energy, to complete the conversion.

The burning of fossil fuels releases fixed N in the fuel and to a smaller degree provides high temperatures necessary for the conversion of N2 to NH3. The release of N from biological pools such as clearing forested land also contributes to Nr in our environment (Vitousek, 1997). 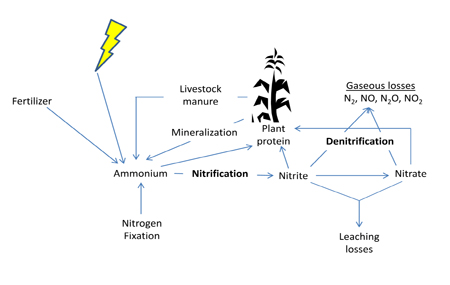 Adapted from “Utilization of Nitrogen by Plants”, Purdue University.

Prior to adopting the use of commercial N fertilizers, farmers depended on lightning storms, crop residue, animal manure and N fixation by legumes to produce the N needed for plant growth. A portion of the N fixated by legumes is removed in harvested crops for use by animals and humans. The remainder is left in the field either as organic N in crop residue or in the soil as nitrate and nitrite. Denitrifying bacteria that line in anaerobic conditions in soil, riparian areas and wetlands, convert a portion of the NO2 and NO3 back to their inert state (N2) and to a lesser extent N2O.

Increased human activity, including burning fossil fuels, clearing land and manufacturing commercial N fertilizers, has made significant contributions to the Nr in the environment. Prior to the increased release of reactive N associated with human activity the amount of Nr in the environment was held in balance by the denitrification process. Human activity has had positive and negative impacts on the denitrification process but to what extent is not well understood (Vitousek, 1997). The net effect has been a significant increase in the reactive forms of N in our environment.

Increased use of nitrogen fertilizer

Chart 2 shows the growth in commercial fertilizer use in the United States from 1960 to 2008. Phosphorus as P2O5 and potash as K 2O use has stayed constant since the early 1990’s. These two components of soil fertility are chemically bound to soil particles (phosphorus more so than potassium) and, if not used by one year’s crop, remain in the root zone and available for the following year’s crop. 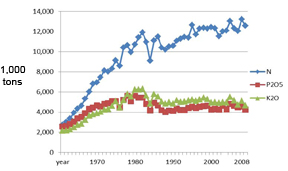 During that same time span N use has increased over 300 percent. Unlike P2O5 and K2O, if N is supplied beyond crop needs for a single growing season, the N not utilized by the crop may be bound by organic matter, leach from the root zone, be lost through surface water runoff or it may volatilize into the air prior to the next year’s crop. Fertilizer use in the United States is indicative of other growing regions throughout the world. This annual input of commercial fertilizer worldwide is a significant contributor to the reactive N in our environment.

Why is the increasing amount of reactive N a concern?

This increase release and conversion of N has positively impacted all of our daily lives. The nitrogen used in agriculture has made it possible for farmers to meet the world wide demands of a growing population’s daily needs for food, fiber and shelter. Fossil fuels create energy for virtually all of our daily processes that we consider routine but are often as basic to others as warming their homes. Limiting Nr in the environment becomes more challenging when the importance of these daily activities is considered. The increasing levels of reactive N are leading to environmental concerns.

Nitrate, NO3, has long been a concern in ground water. High levels of nitrates in ground water have been directly linked to increased cases of blue baby syndrome, a health concern in infants under six months old and issues for the elderly. The United States Environmental Protection Agency (EPA) has an established safe drinking water standard of 10 mg NO3-N per liter water (EPA, 2009). In 1998, EPA reported finding NO3 levels exceeding the 10 mg/L standard in 40% of the reporting hydrogeologic settings but only 1% of the tested drinking water sources exceeded the limit (EPA, 1998).

Excess Nr ends up in streams, rivers and lakes through tile line flows and in organic matter and top soil erosion. It contributes to eutrophication and algae blooms in lakes and coastal areas that receive waters from nutrient enriched rivers (EPA, 20111).

Nitric oxide (NO), and nitrogen dioxide (NO2), collectively referred to as NOx, contribute to smog and haze and have been linked with asthma in children and adults (EPA, 20112).

Ammonia deposition has been associated with the undesirable changes in forest growth (Pitcairn, 1998).

The US EPA is studying the positive and negative impacts of Nr on a national and regional basis. The agency has contributed to the development of a National Ecosystems Services Atlas. This atlas, due out in 2011, is intended to identify the ecosystem systems, and drivers, impacted by reactive N (EPA, 20111).

What is agriculture’s role?

Agriculture is considered a major source contributor of excess Nr and therefore the industry will be looked to for solutions. When one considers the increasing cost of N inputs, contributing to the solution may actually be a win-win situation for the producer, agriculture and the environment.

Practices that may reduce Nr associated with agricultural production include

Nr in the environment is an emerging issue. Because of agriculture’s dependence on nitrogen for continued yield improvements, it is an issue the industry will want to monitor as the impact of Nr in our environment is explored.

In 2006 the U.S. EPA convened the Science Advisory Board Reactive Nitrogen Committee. The most recent draft report (164 pages) from that committee containing the committee recommendations was posted in January 2011. View this report.