What is the relationship between soybean maturity group and yield?

Why planting soybean varieties from a range of adapted maturity groups is recommended.

Producers are looking for ways to improve soybean yields and profitability and many are planting longer maturing soybean varieties as a way to reach these goals. The theory behind this strategy is that later maturing varieties will have a longer reproductive period and take full advantage of the growing season. However, planting later maturing varieties carries some risk. The most obvious risk is that the crop could be damaged by frost or freeze events, reducing yield and quality and increasing harvest delays. Additional risks include a greater potential for delayed wheat planting, early snow cover (Photo 1), harvest losses and soil compaction from harvesting when the soil is too wet (Photo 2). 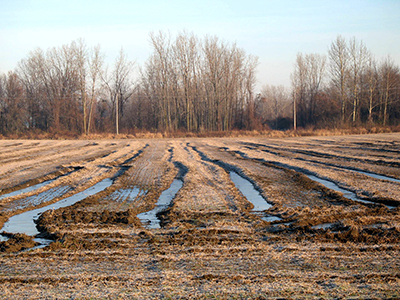 Information from the 2009-2016 Michigan Soybean Performance Reports was used to determine the relationship between soybean maturity and yield in Michigan. The highest yielding Roundup Ready varieties in each maturity group were selected from each of the trial locations from 2009-2016. The top four varieties were selected from the trials in the central zone and the top five varieties were selected from the southern zone trials. This was done to reduce the effect of individual variety performance on the results. In a few years, only two or three varieties from the earliest and latest maturity groups were entered in the trials. The average yield for each maturity group was calculated for each location and for each zone over the eight-year period. This information and the average planting dates for each of the locations are presented in the following tables. The analysis assumes that producers will select the highest-yielding varieties for their farms.

*Does not include data from 2012.
**The average yield for the top five varieties from the 3.3 maturity group was included for 2016 as there were no 3.2 varieties entered in the trials in 2016.

The year-to-year variations that occurred in the relative yield performance of the early and late varieties resulted from three factors: planting date, drought and white mold. The planting date effect was most obvious in 2011, when five of the seven trials were planted in June, favoring the early varieties. The late varieties performed better than the early varieties during the severe drought, which occurred in 2012, as they were able to take advantage of the rains that finally fell in August. The worst outbreak of white mold in Michigan occurred in 2014, resulting in the early varieties winning five of the seven trials that year. The early-maturing varieties were able to escape much of the extended infection and disease development periods due to shorter reproductive stages.

While there was year-to-year variability, the three factors responsible for the variability (planting date, drought and white mold) are difficult to predict when producers place their seed orders. Therefore, this analysis supports the current Michigan State University Extension recommendation for planting high-yielding and pest-resistant varieties from a range of adapted maturity groups each year. In the central zone, the adapted maturity range is 1.8 to 2.6 and in the southern zone, the range is 2.4 to 3.2.