Severity of Stewart’s wilt in corn is directly related to corn flea beetle winter survival. So, how did the beetles do this past winter?

Stewart’s Wilt (Erwinia stewartii) is a bacterial disease seriously affecting susceptible sweet and field corn varieties. If the plants become infected at the seedling stage, they become severely stunted and have white striping on the leaves (Photo 1) and internal browning of stem tissue. Infections after the seedling stage will cause leaf blight and are generally not as economically severe as seedling infections. Early infection of seedling plants can lead to total yield loss in some plantings. 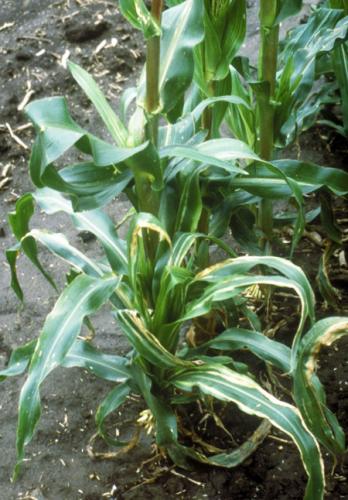 Stewart’s wilt overwinters on adult corn flea beetles (Chaetocnema pulicaria, Photo 2) and is dependent on the beetle for dissemination. As the beetle feeds, it transmits bacterium to the feeding wounds, infecting the plant. Severity of the disease is directly related to overwintering survival of the flea beetle, and beetle survival depends directly on temperature. 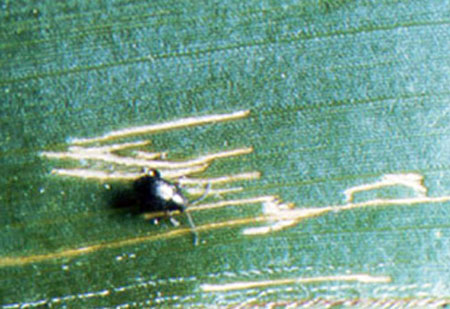 The other method, the Stevens-Boewe forecast, is to calculate the average temperature for each of the three months and add them together. In this method, if the total for the three months is below 80, the prediction is for little to no disease incidence, and if the value is above 100, symptoms will be severe. Again, values in between these numbers indicate varying degrees of severity. Neither method predicts with 100 percent accuracy, but they can give producers a “heads-up” on what may occur.

In general, mean temperatures during December through February in Michigan averaged 1 to 2 F milder than normal across the state, with warmer than normal conditions during December and January and colder than normal in February. Table 1 contains temperature data from eight locations around Michigan. The average three-month temperature for all sites is below the 33 F figure, but five sites are above 27 F. The three-month sum figures range from 62.8 (McBain, Mich.) to 88.5 (Watervliet, Mich). For sites closer or similar to your location, go to the Enviro-weather website and generate a “custom report” for the three-month period.

Table 1. Winter temperature data from 2012-2013 as a predictor for Stewart’s wilt severity in 2013. Stevens-Boewe is the sum of December, January and February’s average temperature.

Overall, it looks like the winter weather in Michigan was harsh enough to give a predicted severity of “light” to “none” depending on where you are located. Warmest winter temperatures were observed across southwestern and southeastern sections of Lower Michigan, which suggests a slightly higher risk of beetle survival in those areas. As mentioned earlier, these predictions are not 100 percent accurate, so continue to scout your corn fields for flea beetles and control them as necessary. For control options, contact your local Michigan State University Extension county office.