What’s the difference between low sodium, no added salt and regular canned food?

Being able to identify the different amount of sodium in low sodium, no added salt and regular is an important step towards making healthy choices.

Sodium is an abundant mineral found naturally in the earth. It helps carry electrical currents in our body, and is therefore in a class called “electrolytes”. Sodium also plays a major role in contracting muscles and balancing fluids in our body (which is why we sometimes get thirsty and feel bloated after consuming too much sodium). Salt is a combination of sodium and chloride, so when we are talking about salt and sodium, they are often used interchangeably.

Sodium is an essential nutrient, but one that we get in abundance in our diet. In fact, limiting sodium in our diet is a common goal, as too much sodium can lead to such health issues as high blood pressure, edema (fluid retention), and even possibly osteoporosis. The percent daily value (percent DV) on a food label is the sodium content of a serving of food compared to the maximum recommended intake of 2400 milligrams per day. If for instance, a four ounce serving size of food contains 640 milligrams of sodium, this is 27 percent of the maximum daily value of 2400 milligrams per day. If you are looking at the percent DV as a guide, a food that provides less than five percent DV is a low amount, and greater than 20 percent DV is a high amount. If you are eating two servings of the food item in the above example, then you are getting more than half (54 percent) of your DV for sodium - a poor choice if you are trying to limit sodium in your diet (or even if you are not).

Processed foods are a major source of sodium and should be limited. Vegetables are naturally very low in sodium, if they have any at all, but when salt is added to processing, the food can become a major source of sodium. When using canned food, such as vegetable products, buying no added salt or low sodium are helpful ways to reduce the amount of sodium when fresh is not an option, with often little effect on the taste of food.

Sodium is a popular ingredient used in food preservation, such as canning. It is, however, not necessary to use salt to preserve canned food. You can find food items that carry claims such as “Low Sodium” or “No Added Salt”. To claim it is “low sodium”, the item must have 140 miligrams of sodium or less per serving, and “No Added Salt” does not have salt added, but does not mean that it is a “sodium free” food – and must state this if this is the case. 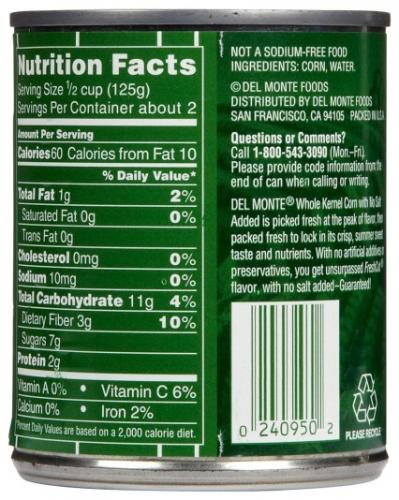 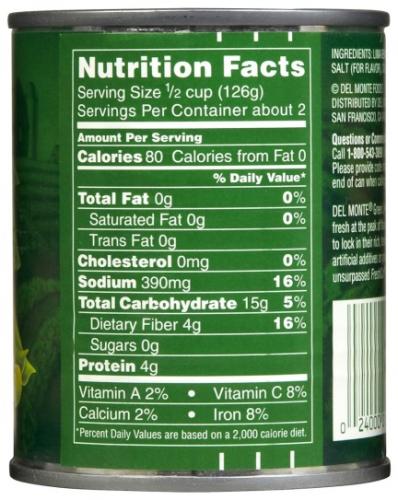 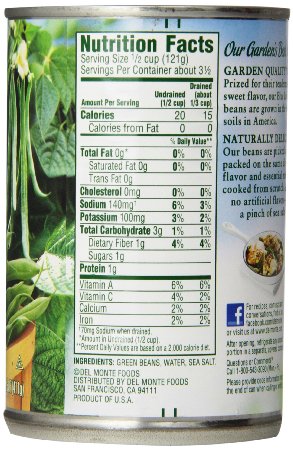 No Added Salt vs. Regular  vs. Low Sodium

The examples here are all based on ½ cup serving size, and the sodium content ranges from 10 miligrams (no added salt) to 140 miligrams (low sodium) to 390 miligrams (regular). Consider if your serving size was one cup, not an unreasonable serving size for many, the amount then increases to 20 miligrams, 280 miligrams and 780 miligrams respectively. This is a good example of how easily sodium can accumulate in our diet, even in healthy foods such as green beans. Michigan State University Extension recommends following the Dietary Guidelines for Americans, and limiting sodium rich foods in our diets.