Why are my hops producing male flowers?

Hops (Humulus lupulus) are used in brewing for their aroma and bittering properties. The female flowers or strobuli, are commonly referred to as cones, and contain the acids and essential oils that impart aroma and bitterness respectively. 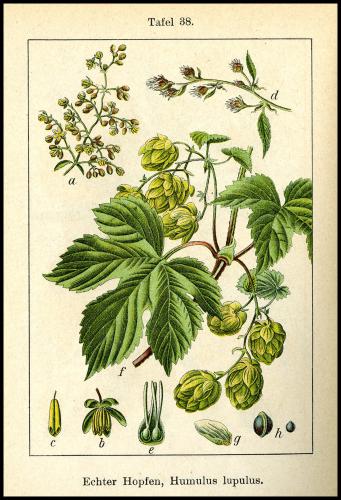 Seeds in cones often have high levels of fatty acids that negatively affect beer flavor stability (Beindl et al., 2014). Hop sampling and inspection tests that result in high levels of leaf, stem, or seed may also result in lower returns to growers. To avoid the risk of fertilized cones, it is recommended that male plants be removed from hop producers’ fields.

Hop producers may occasionally notice plants with both male and female hop flowers (Figure 2). Producers may rightly wonder whether these plants should be removed from the field. According to Dr. Peter Darby (pers. comm.), “…flowering morphology can be affected by the environment and, given the appropriate light and temperature conditions interacting in a complex way with the growth stage of the individual plant, a female plant can produce some male flowers. The amount will often vary season to season. ‘Cascade’ is particularly noted for this phenomenon. Because of the demand from craft brewers, this variety is recently being grown in several areas in Europe where male hops are not wanted or are even forbidden to be grown. The male structures on Cascade have excited considerable anxiety and they have been looked at in some detail. All have been found to be genetically (at the chromosome and DNA level) female. They are male-sterile. Growers do not need to cull the affected plants. On these, the pollen will be sterile. True hermaphroditic plants, that are able to produce viable seed, do occur, but are extremely rare.” 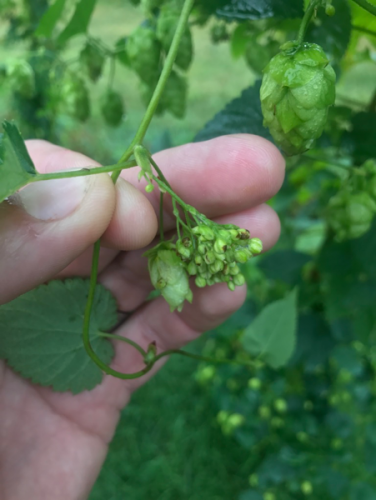 However, in areas where there are large populations of wild hops in proximity to commercial growing operations, female cones could become fertilized resulting in cones with seeds. In such cases, a seed may drop to the ground and begin growing from the crown the following season. Because males tend to be more vigorous, their bines often get trained instead of the original female plant. Darby suggests this is why male plants “seem to suddenly appear amongst the females.” In these cases, where the flowers are entirely male, on at least one bine, then it is likely a male and the plant should be removed.

Mechanical removal of a crown may prove impossible in mature yards, use of a systemic herbicide might more accurately target an individual male and should be applied in the fall only to the plant you are trying to kill via spot treatments. Growers should also flag the location of suspected or treated male plants to recheck the area the following season for additional males or regrowth of treated male plants.