In the last Landscape Alert, I mentioned that “Will we have lot of winter injury?” is one of my least favorite questions to face each year. “Will we have a lot of cones in Fraser fir?” is another dreaded question. In this case, however, we have a little better basis for making an assessment.

Fir cone buds are actually formed the year before the cones develop. So, the buds that will produce the cones we’ll see this May are already on the trees. Each year buds are formed along newly expanding shoots. As growth begins to slow in June and early July, the newly formed buds begin to differentiate; some become vegetative, others become cone buds. Stress, due to high temperatures or drought, promotes cone buds over vegetative buds.

The weather pattern we saw over much of the state last summer suggests we could be in for a major crop of cones this year. For example, at the Michigan Automated Weather Network site at Montcalm Research Center near Lakeview, Michigan, daily high temperatures were very warm in June 2007, averaging nearly 85ºF for much of the month. At the same time, rainfall was relatively scarce. If we compare rainfall for the summer with potential water loss from soil and vegetation (potential evapotranspiration or PET) we see that we experienced a rainfall deficit (rainfall less than PET) for 10 out of 12 weeks during the early summer (see figure). This resulted in a total rainfall deficit of about 10 inches for the period. Since much of this period corresponds to the time when cones are formed, we may be in for a lot of cones this year. 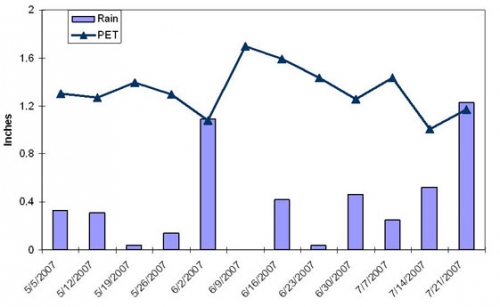