As the days get longer and warmer, it’s time to get out and about and look for evidence of winter injury to trees and shrubs in landscapes nurseries and Christmas tree plantations. As I’ve noted here before, winter injuries are among the most common form of environmental problems that we see in Michigan landscapes year in and year out. This winter is certainly no exception. For many parts of the state, snow was plentiful this past winter. For trees and shrubs this is a good news-bad news scenario.

On the positive side, snow cover can provide an insulating blanket that protects low-growing plants from severe cold and winter desiccation. On the downside, this winter’s snowfall can lead to several problems. First, heavy snow-loads can cause branches to break or trunks to split apart. Now is a good time to inspect trees and shrubs for damage and prune, if needed. Early spring is an ideal time to prune many deciduous trees and shrubs since they are still dormant. Pruning trees before they leaf out makes it easier to spot problems and envision the crown structure that you want to leave when you’re done pruning. Dormant season pruning can also reduce the likelihood of increasing susceptibility to diseases, particularly oak wilt. Remember spring flowering trees and shrubs, such as lilacs, crabapples, and dogwoods should be pruned after flowering.

Another snow-related problem that we will see frequently this spring is salt damage. With near-record snowfall amounts recorded around the state, road crews worked overtime to keep roads clear, applying tons of road salt. Look for evidence of salt damage near roads and parking lots. Don’t be too quick to assume that heavily salt-damaged conifers are toast. If buds are not damaged, the trees may push new growth and look presentable by mid-summer. Successive years of such damage, however, is more than most trees can handle. If salt is causing chronic problems in certain areas, consider whether protective measures (e.g., erecting burlap screens) are warranted for next winter.

This winter’s snowfall has also lead to widespread animal damage to trees and shrubs. In many parts of the state, deer were hungrily browsing on landscape trees when they weren’t busy running into cars. Smaller mammals, like rabbits, mice, and squirrels, have also been gnawing on an array of landscape plants. Oftentimes corrective pruning may be needed to remove browse damage or restore balance to shrubs that deer have browsed unevenly.

Conifers may need special attention since they are particularly vulnerable to winter injury. Whether they are in landscapes, nurseries or Christmas tree plantations, conifers are especially susceptible to winter damage because of their evergreen habit. This winter I have seen a high incidence of winter desiccation on many conifers. As the name implies, winter desiccation is actually a form of dehydration injury that occurs when conifers or broadleaved evergreens begin to transpire on sunny days when the ground is still frozen. In many cases a snowline is visible, below which foliage is not damaged while needles on the top of the plant are brown or red. ‘Dwarf Alberta’ spruce appear to be particularly hard hit this winter. As I noted for salt injury earlier, the best approach with winter desiccation problems is to take a wait-and-see approach. Needles may be heavily damaged, but buds are often unaffected, so wait until the plant has had a chance to put on a new growth flush before taking any drastic actions.

Of course, one of the biggest winter injury problems we have with nursery and landscape plants and Christmas trees is still yet to come; late frost damage. Conifers that break bud early such as corkbark fir and concolor fir and early flowering trees like star magnolia are often hit by frosts after they break bud. In the southern part of the Lower Peninsula, these problems are usually associated with frost events in April and even early May, so stay tuned. 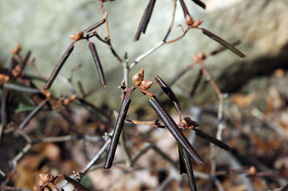 Rhododendrons may show signs of exposure to
severe cold, such as leaf browning and rolling, but
plants are usually okay as long as buds aren't
damaged. 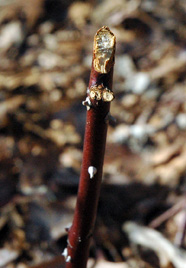 With lots of snow this winter
rabbits, mice, and deer caused
considerable damage to landscape
plants. 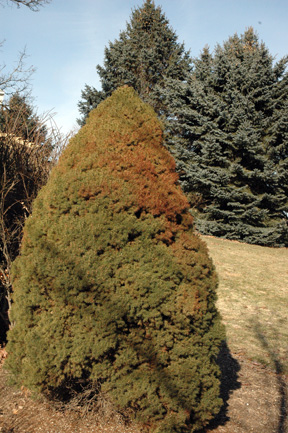