The Easter Bunny may not be so fondly remembered this spring as the snow piles melt away from our landscape trees and shrubs. Heavy and consistent snow cover is the perfect recipe for chewing damage by a variety of rodents, especially rabbits. The snow cover keeps rabbits from being able to forage what little green is available underneath and makes a natural ladder for climbing into the crown of shrubs like burning bush and others. One year while at college, I remember when the snow was piled so high along the main street that the following spring, rabbit damage to the dozens of flowering crabs was actually at eye level.

Underneath the canopy of stems, check for twigs that appear white instead of dark gray. Rabbits, mice and other varmints love to gnaw off the outer bark in search of the tender green cambium just beneath. If the chewing damage completely encircles the twig, the top portion is history and will begin to die back in early summer.

Mouse damage, essentially has the same result but the girdling typically will be found much lower on the trunk. My observation is that mice have a much greater range of plants they will chew and damage is often more irregular, not girdling the whole way around, giving the plant at least a fighting chance to survive. One often finds mature pines or fruit trees completely girdled at ground level where mice have over-wintered. Mice can also chew into the upper canopy of twigs such as in the case of a dense juniper, covered by snow. The branches become a super highway for their movements and the snow cover protects them from predators such as hawks.

Your best defense here is a good offense, so go ahead and get the pruning equipment out and sharpen the blades. On a burning bush, you can cut off the twigs just beneath the girdled portion and the plant will sprout back new shoots all along the stems that are left. If you leave a few long stems that were not fed upon, the plant is likely to look lopsided come next summer. You can expect a mature and healthy burning bush to regrow quickly back into what it was in about two seasons. Some folks actually look at the girdling damage as nature’s pruning.

If you have high populations of rabbits in your area you will certainly want to take some precautions for protecting woody plants next winter. Chicken wire (a fine mesh) can be your best friend when it comes to keeping hungry varmints away from valuable specimens. You may only need to encircle the trunk of a tree to about two feet or you can make a cage to encircle a shrub or specimen conifer.

The other thing you should think about is habitat. Leaving large brush piles near by, low hanging limbs of conifers and tall grass are all encouraging factors for small rodents. One year I found a perfect bunny nest in a large bag of potting soil I had left out all winter. I will bet they enjoyed a well-insulated winter slumber just before they annihilated my shrubs.

If you live in the country, be observant of natural predators in the area such as hawks, owls and fox. If you can create a perch for predacious birds, such as leaving a dead tree standing, you will invite them to patrol your area. It is surprising how one nice hawk family can keep a rodent population from exploding. 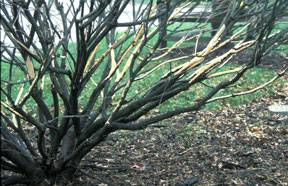 Chewing damage caused by rabbits during the winter. 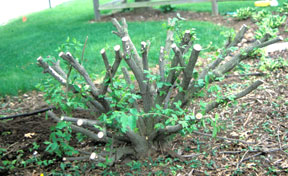 The buzz about native bees with Dr. Michelle Fearon