The sawfly Pikonema alaskensis Rohiver feeds on all spruces found in Michigan. The larvae are light green with a brown or reddish-yellow head and a green stripe on each side of the body. When fully grown, the larvae are about three-quarters of an inch long. They feed on spruce foliage from early June to late July and prefer to feed on the new growth needles. As the larvae become older, they may move to feed on the previous year’s foliage. Because they blend in well with the needles, often feeding isn’t noticed until quite a bit of damage is done. Defoliation tends to be more in the upper portion of the trees. Once the larvae stop feeding, they drop to the ground, enter the soil and spin cocoons where they will overwinter. Usually we don’t see large numbers, and they are not considered a major pest of Christmas trees. If they are caught early, the damage can usually be minimized or prevented. 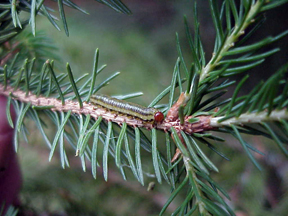 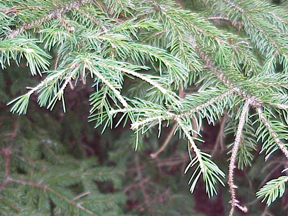