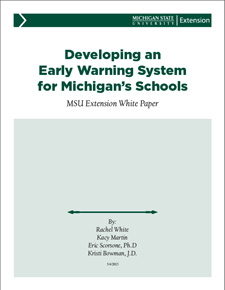 This white paper from MSU Extension examines the proposed early warning system for school fiscal stress and details some of the limitations in the proposed measures. While an early warning system is vital to the sustained health of Michigan schools, there are issues with the requirements in in House Bills 4325, 4326, 4327, 4328, 4329 and 4330. Using the mechanisms in those bills, less than one-third of schools in deficit would be identified. Moreover, these indicators of fiscall distress will quite likely inaccurately identify many schools as approaching fiscal disress that will then be subject to additional administrative and oversight requirements.

This paper examines in detail the school districts in Michigan and details how many school districts in deficit would not be captured by the fiscal measurements in the proposed bills. It also outlines a correlation analysis between district deficit and the predictors of distress in the proposed early warning system, finding a weak correlation. The paper then outlines alternative fiscal measurements with stronger correlation, including using asset-to-liability ratios and increase in payments in the Michigan Public Schools Employees Retirement System. 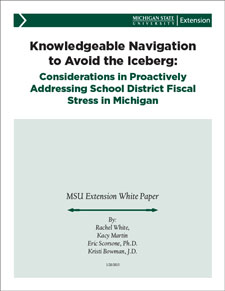 This white paper from MSU Extension outlines what a proactive, evidence-based financial health indicator system would look like and how it could prevent many school districts from reaching the crisis point.  Fifty-seven Michigan school districts ended 2014 with a deficit or projected deficit, and many are in danger of entering a severe fiscal crisis.