Ash species attacked by emerald ash borer include green (Fraxinus pennsylvanica), white (F. americana), black (F. nigra), and blue (F. quadrangulata), as well as horticultural cultivars of these species. Green and white ash are the most commonly found ash species in the Midwest with blue ash being rare.

While other woody plants, such as mountainash and pricklyash, have “ash” in their name, they are not true ash, or Fraxinus species. Only true ash are susceptible to attack by emerald ash borer.

To properly identify ash trees, use the following criteria:

Branches and buds are directly across from each other and not staggered. When looking for opposite branching in trees, please consider that buds or limbs may die; hence not every single branch will have an opposite mate.

Leaves are compound and composed of 5-11 leaflets. Leaflet margins may be smooth or toothed. The only other oppositely branched tree with compound leaves is boxelder (Acer negundo), which almost always has three to five leaflets. 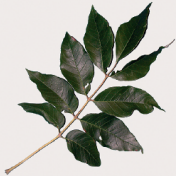 White ash (on left) and green ash (on right)

On mature trees (left), the bark is tight with a distinct pattern of diamond-shaped ridges. On young trees (right), bark is relatively smooth. 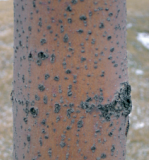 When present on trees, seeds are dry, oar-shaped samaras. They usually occur in clusters and typically hang on the tree until late fall, early winter.

Exhibits opposite branching and compound leaves. However, has 3 to 5 leaflets (instead of 5 to 11) and the samaras are always in pairs instead of single like the ash. 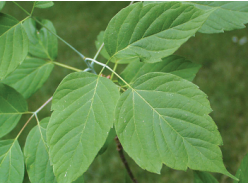 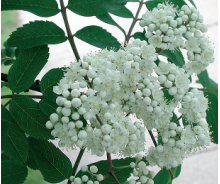 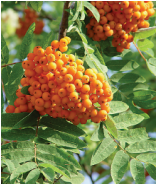 Leaves are compound with 5 to 7 leaflets, but the plant has an alternate branching habit. Fruit are hard-shelled nuts in a green husk. 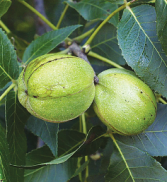 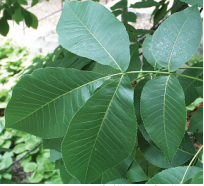 Branching is alternate and the leaves are simple with an unequal leaf base. 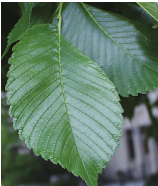 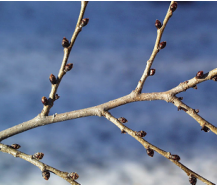 Leaves are compound with 9 to 15 leaflets, but the plant has an alternate branching habit. Fruit is a large dark brown nut inside a green husk. 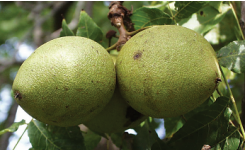 BeLEAF It or Not! 4: Logging Products