Black dot is a common disease of potato. It is most often observed on tubers but it can affect all parts of the plant. The disease has probably been underestimated in the recent past as the symptoms are similar to more common potato diseases. On potato foliage symptoms are nearly indistinguishable from early blight and on tubers it produces blemishes that are easily mistaken for silver scurf. Although not as serious as other more common potato diseases such as black scurf, silver scurf, or common scab, it can be more devastating as it affects all parts of the plant. Above ground it can infect the vascular system causing wilt, and below ground it can cause severe rotting of roots, shoots and stolons, leading to early plant decline, discolored tubers and reduced yields.

Black dot is named after the abundant black dots that form on tubers (Fig. 1). The black dots are micro-sclerotia that are often just visible to the naked eye. They are not restricted to tubers and can also be found on stolons, roots and stems both above and below ground (Fig. 2). Foliar symptoms are not often observed in Michigan, but this may be due to the fact that they bear a resemblance to the small brown to black flecks characteristic of early blight. Stem lesions are more common in Michigan than foliar symptoms, especially towards the end of the growing season. Stem lesions tend to form around the base of leaf petioles (Fig. 3a). As with leaf lesions they initially start out as small brown flecks. These gradually coalesce forming lesions which may girdle the stem (Fig. 3b). As lesions mature they develop circular to irregularly shaped, white to straw-colored centers with wide margins that vary in color from brown to black. Micro-sclerotia form in the center of the lesions and are often clearly visible against the pale background (Fig. 3c). As infected tissue senesces, micro-sclerotia may become abundant covering the entire surface of the stem. Micro-sclerotia often appear at the base of the plant up to several inches above soil level late in the season and after vine kill (Fig. 3d). 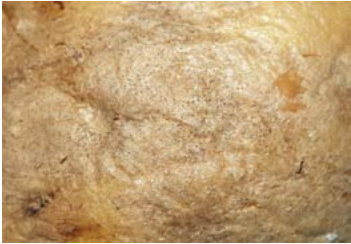 Figure 1. Black spots on the surface of a black dot infected tuber. These are microsclerotia of the black dot pathogen Colletotrichum coccodes. 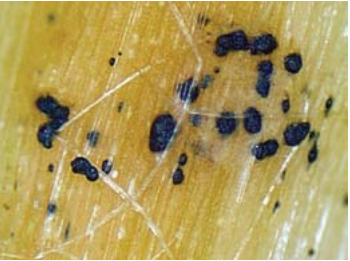 Figure 2. Black dot mircosclerotia on the surface of a potato root, and root hair.

Figure 3. Black dot stem lesions start out as pigmented flecks (a). Lesions may coalesce developing irregularly shaped, white to straw-colored centers (b) and eventually girdle the stem (c). Microsclerotia form in lesion centers (c). Late in the season after or after vine kill, microsclerotia may cover the base of the plant near the soil sufrace (d).

Lesions on below ground stems and stolons may resemble Rhizoctonia lesions but are darker in appearance. Infection of root cortical tissue causes sloughing of the periderm and may result in severe rotting and early plant death. Microsclerotia and mycelia may also be abundant both internally and externally on roots and stolons.

Tuber symptoms appear as a brownish to gray discoloration over a large portion of the tuber or as circular to irregularly shaped areas (Fig. 4). Black dot may develop a silvery sheen during storage, which can be confused with silver scurf. However, black dot tends to show much more irregularly shaped patches with less well-defined margins than silver scurf. Inspection with a hand lens (10x) will quickly differentiate the regularly spaced black dots (Fig. 1) from the bunched threads of silver scurf. 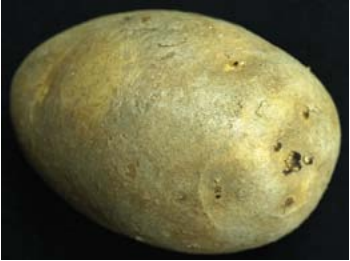 Figure 4. Tuber symptoms appear as a brownish gray discoloration over a large portion of the tuber.

Black dot is caused by the fungus Colletotrichum coccodes. The pathogen has a wide host range, occurring on other plants in the Solanaceae family including eggplant, pepper, tomato and weeds such as hairy nightshade (Solanum sarrachoides). Colletotrichum coccodes readily produces microsclerotia on senescing plant tissue and the surface of tubers. These structures allow the pathogen to survive for long periods of time in the soil. In Michigan, the pathogen survives between growing seasons as sclerotia in infested plant debris and soil, on infected potato tubers and in overwintering debris of susceptible solanaceous crops and weeds. In the spring, sclerotia develop into acervuli. These are fruiting bodies which produce masses of spores (Fig. 6). Spores serve as the primary inocula to initiate disease (Fig. 5). Initial inoculum is readily moved within and between fields, as the spores are easily carried by air currents, windblown soil particles, splashing rain and irrigation water. Poor soil drainage and low plant fertility are thought to increase disease incidence and severity. 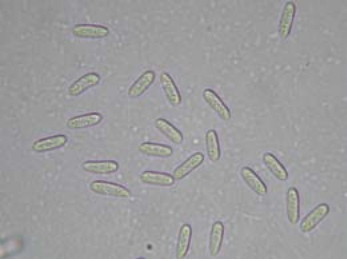 Spores of C. coccodes (Fig. 5) are produced on potato plants and plant debris between 45° and 95°F. However, in greenhouse studies limited infection occurred below 59°F. As with most Colletotrichum species, C. coccodes favors temperatures above 68°F, and free moisture from rain, irrigation, fog or dew is required for spore germination and infection of plant tissues (Fig. 6). Spores landing on susceptible plant tissue germinate and may penetrate tissues directly through the epidermis and or through wounds such as those caused by mechanical injury or insect feeding. On tomato leaves, C. coccodes has been reported to colonize lesions caused by Alternaria solani (early blight) and flea beetles.

Infection of below-ground plant parts continues throughout the growing season, especially when plants are under stress, such as during long, warm dry periods. Production of microsclerotia is greatest at high temperatures and increasing disease incidence has been associated with increasing soil temperatures. Colonization of tubers can occur at all stages of development, but formation of sclerotia on the tuber surface is more prevalent late in the season when soil temperatures are declining from the peak in high summer. 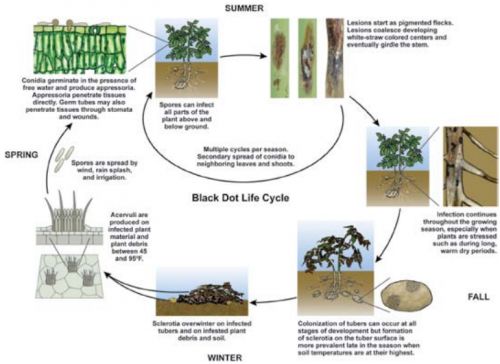 Effective management of black dot requires implementation of an integrated disease management approach. The disease is controlled primarily through the use of cultural practices and fungicides.

One of the most important approaches to black dot control is to reduce the amount of inoculum in soil through the use of cultural practices such as crop rotation, removal of crop debris, volunteer and cull potatoes from the field, and eradication of weed hosts. Since black dot microsclerotia can persist in the field for up to 2 years, a 3 to 4 year rotation with non-host crops (e.g. small grains, soy bean or corn) is often recommended to reduce the amount of inoculum in the soil. The following cultural practices are also suggested to prevent and reduce the incidence of black dot.

4. Use good crop production practices, such as timely irrigation and adequate fertilization to reduce crop stress.

5. Use tillage practices such as fall plowing that bury plant refuse and encourage decomposition.

6. Harvest tubers as soon as possible after vine kill.

7. Control temperature and humidity in storage. High temperatures and condensation on the tuber surface promotes disease.

Currently there are no known commercial varieties with resistance to black dot. However, research has shown that in general late maturing varieties tend to be more vulnerable to yield reductions than early maturing varieties. This may be due to the fact that black dot is a late season disease, and leaving tubers in the ground longer exposes them to more disease pressure.

This publication is part of a new series of bulletins on potato diseases in Michigan. Funding for this publication was provided by Project GREEEN, MSU Extension, Michigan State University AgBioResearch and the Michigan Potato Industry Commission.