Brown leaf spot is a very common disease of potato that is found in most potato-growing areas. It is often confused with early blight (caused by A. solani) and the two pathogens are closely related. Although it occurs annually to some degree in most production areas, the timing of its appearance and the rate of disease progress help determine the impact on the potato crop. The disease occurs over a wide range of climatic conditions and disease severity depends in large part on the frequency of foliage wetting from rainfall, fog, dew or irrigation, on the nutritional status of foliage and on cultivar susceptibility. The fungus is considered to be a weak pathogen. This is reflected by the fact that leaf lesions are usually smaller and darker in color than early blight lesions. Though losses rarely exceed 20 percent, if left uncontrolled, the disease can be very destructive. In Michigan, intensive fungicide treatment has restricted losses to less than 5 percent. 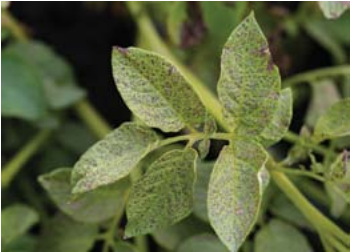 Foliar lesions appear as small, irregular to circular, dark brown spots on lower leaves, and range in size from a pinpoint to 1/8 inch (Fig. 1). Brown leaf spot can occur throughout the growing season and is usually seen before early blight. On young leaves, lesions may be confused with those of early blight, which are also small, circular lesions initially. However, brown leaf spot lesions never develop the dark, alternating concentric rings characteristic of early blight. Furthermore, as the lesions coalesce, they are not restricted by large veins as in early blight and the whole leaf may become chlorotic, with infected areas turning brown and disintegrating, causing the edges of the leaf to roll up (Fig. 2). Elongated, superficial brown or black lesions may also form on stems and petioles. Severely infected leaves eventually wither and die but usually remain attached to the plant (Fig. 3). Severe infection of foliage by the early to mid-bulking period can result in smaller tubers, yield loss and lower tuber dry matter content. 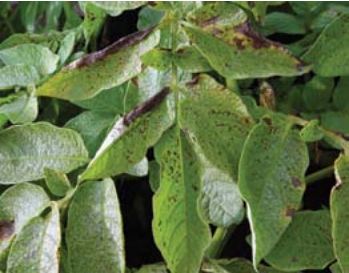 Figure 2. Brown leaf spot lesions are not restricted by large veins. As they grow, surrounding tissue becomes chlorotic, and lesions turn brown and disintegrate, causing leaf edges to curl up.

Spores of A. alternata may infect tubers late in the season or during harvest. Tuber symptoms of brown leaf spot are commonly referred to as Black Pit. Tuber infection results in small black pits forming on the tuber surface. These are similar in appearance to pits caused by common scab but are usually deeper, narrower and darker. These lesions are sunken with defined margins and can be 1/8 inch deep and up to 1/2 inch in diameter. Skin patches nearly identical to early blight can also be clearly seen after tubers are washed. The underlying tissues are leathery to corky in texture, dry and usually dark brown. These lesions reduce the quality and marketability of fresh market tubers. Tuber infection also presents a challenge to processors because tuber lesions often require additional peeling to remove the darkened lesions and underlying tissues.

Brown leaf spot is caused by the fungus Alternaria alternata. The pathogen has an extremely wide host range and is found wherever potatoes are grown. The dark-colored spores (Fig. 4) and mycelia of the pathogen survive between growing seasons in infested plant debris and soil, in infected potato tubers, and in overwintering debris of susceptible crops and weeds. Overwintering spores and mycelia of A. alternata are melanized (darkly pigmented) and can withstand a wide range of environmental conditions, including exposure to sunlight and repeated cycles of drying, freezing and thawing. In spring, spores (conidia) serve as primary inoculum to initiate disease (Fig. 5). Plants grown in fields or adjacent to fields where potatoes were infected with brown leaf spot during the previous season are most prone to infection because large quantities of overwintering inoculum are likely to be present from the previous crop. Initial inoculum is readily moved within and between fields because the spores are easily carried by air currents, windblown soil particles, splashing rain and irrigation water. 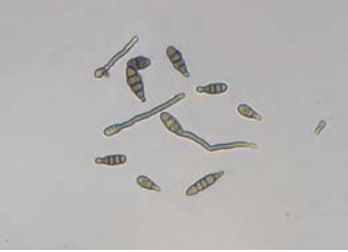 Figure 4. Spores of Alternaria alternata are melanized and can withstand a wide range of environmental conditions.

Spores of A. alternata (Fig. 4) are produced on potato plants and plant debris at temperatures between 41° and 86°F. Alternating wet and dry periods with temperatures in this range favor spore production. Few spores are produced on plant tissue that is continuously wet or dry. The dissemination of inoculum follows a diurnal pattern in which the number of airborne spores increases as leaves that are wet with dew or other sources of nighttime moisture dry off, relative humidity decreases and wind speeds increase. The number of airborne spores generally peaks in midmorning and declines in late afternoon and at night.

Spores landing on leaves of susceptible plants germinate and may penetrate tissues directly through the epidermis, through stomata, and/or through wounds such as those caused by sand abrasion, mechanical injury or insect feeding. Free moisture (from rain, irrigation, fog or dew) and favorable temperatures (68° to 86°F) are required for spore germination and infection of plant tissues. Lesions begin to form 2 to 3 days after initial infection.

Many cycles of brown leaf spot spore production and lesion formation occur within a single growing season once primary infections are initiated. Secondary spread of the pathogen begins when spores are produced on foliar lesions and carried to neighboring leaves and plants. Unlike early blight, brown leaf spot can occur any time during the growing season. Early in the growing season, the disease develops first on fully expanded leaves near the soil surface and progresses slowly on juvenile tissues.

In potato tubers, germinated spores penetrate the tuber epidermis through lenticels and mechanical injuries to the skin. Tubers often become contaminated with A. alternata spores during harvest. These spores may have accumulated in the soil or may have been dislodged from desiccated vines during harvest. Infection is most common on immature tubers and those of white- and red-skinned cultivars, since they are highly susceptible to abrasion and skinning during harvest. Coarse-textured soil and wet harvest conditions also favor infection. In storage, individual lesions may continue to develop, but secondary spread does not occur. Infected tubers may shrivel through excessive water loss, depending on storage conditions and disease severity. Black pit lesions on tubers, unlike late blight lesions, are usually not sites of secondary infection by other decay organisms. 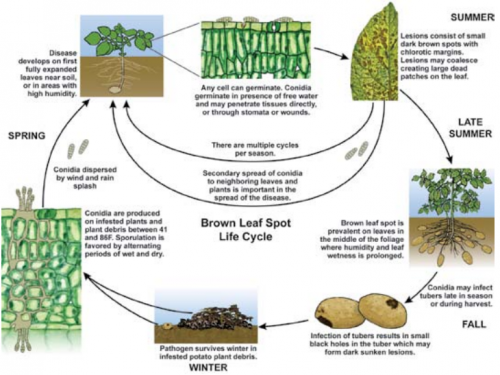 Effective management of this disease requires implementation of an integrated disease management approach. The disease is controlled primarily through the use of cultural practices and foliar fungicides.

Cultural practices such as crop rotation, removing and burning infected plant debris, and eradicating weed hosts help reduce the inoculum level for subsequent plantings. Because A. alternata persists in plant debris in the field from one growing season to the next, rotation with non-host crops (e.g., small grains, corn or soybean) reduces the amount of initial inoculum available for disease initiation. Other cultural control measures include:

3. Use tillage practices such as fall plowing that bury plant refuse.

To minimize tuber infection after harvest, tubers should be stored under conditions that promote rapid suberization because A. alternata is unable to infect through intact periderm.

The most common and effective control method for brown leaf spot is application of foliar fungicides. Protectant fungicides recommended for late blight control (e.g., maneb, mancozeb, chlorothalonil and triphenyltin hydroxide) are also effective against brown leaf spot when applied at approximately 7- to 10-day intervals. Unlike the early blight fungus where some resistance to the strobilurin group of fungicides (Group 11; http://www.frac.info) has been reported in Michigan, the brown leaf spot pathogen is inherently more resistant to strobilurins and has never been well controlled by this class of fungicides. Thus, applications of strobilurins should not be used to control this pathogen. Other fungicides that have shown efficacy against brown leaf spot contain, famoxadone, pyrimethanil, fenamidone and boscalid.

The application of foliar fungicides is not necessary in plants at the vegetative stage, when they are relatively resistant. Accordingly, spraying should commence at the first sign of disease or immediately after bloom. The frequency of subsequent sprays should be determined according to the genotype and age-related resistance of the cultivar. Protectant fungicides should be applied initially at relatively long intervals and subsequently at shorter intervals as the crop ages.

Early-season applications of fungicides before secondary inoculum is produced often have minimal or no effect on the spread of the disease. Brown leaf spot can be adequately controlled by relatively few fungicide applications if the initial application is correct.

This publication is part of a new series of bulletins on potato diseases in Michigan. Funding for this publication was provided by Project GREEEN, MSU Extension, Michigan State University AgBioResearch and the Michigan Potato Industry Commission.