Aspen (often called “popple”) forests are early successional, short-lived forest types. They require full sunlight to reproduce and grow well. Aspen provides some of the best habitat for Michigan’s favorite game species, such as ruffed grouse and woodcock, as well as a host of non-game species. Many wood products are manufactured from aspen, which is processed into pulp for papermaking and chips for oriented-strand board. Aspen is one of Michigan’s most versatile and utilitarian forest types. Areas of controversy are the necessity of clearcutting for regeneration and the desirable amount of aspen in the Great Lakes states. 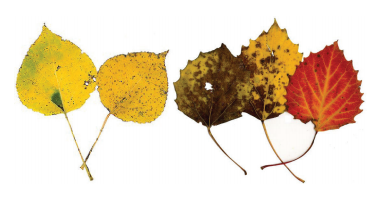 Aspen consists of two main species — quaking aspen (Populus tremuloides) and bigtooth aspen (Populus grandidentata). Other members of the genus include balsam poplar (Populus balsamifera) and cottonwood (Populus deltoides), but these are not major elements of the aspen forest type. Both quaking and bigtooth aspens have flat leaf stems that easily flutter in a light breeze. Bark is light colored, and the trees are often mistaken for paper birch. Quaking aspen begins to decline by age 50 to 60; earlier on poorer sites. Bigtooth aspen tends to grow on better sites and will last a decade or two longer. Trees might grow to 100 feet tall and 2 to 3 feet in diameter, although most trees don’t reach this size.

Quaking aspen has the widest tree range in North America, from the tree line across Alaska to Labrador down to Iowa and Pennsylvania and through much of the Rocky Mountains. Bigtooth aspen ranges from Manitoba and Iowa east to the Atlantic Ocean. Quaking aspen grows on a wide range of soils but does best on well-drained loams. Northern Michigan produces some of the finest aspen on the continent.

Aspen forests are early successional types adapted to catastrophic disturbances such as fire and windstorm. Survival strategy is to aggressively reproduce, grow fast, live a short time and die a quick death. Aspen trees are very intolerant of shade and cannot reproduce in shade, even the shade of their own canopy. Young aspen stands are dominated by aspen species, but the forest type is one of the most diverse in Michigan, especially at the regional level. The most common Michigan associates of aspen are red maple, white pine, balsam fir and paper birch.1 Though huge amounts of seed are produced every four to five years — so much seed that it often resembles light snow — reproduction is more often achieved through root suckers, which usually sprout prolifically following the death of the parent. These sprouts are clones — genetically identical to the parent plant — and are connected through the roots. Trees are typically either male or female. As dense sucker stands mature, aspen naturally thins itself. Trees that are outcompeted by surrounding trees soon die. As aspen stands thin and reach maturity, other tree species appear in the understory. They were either present all along, mixed with the abundant aspen, or entered the stand from a nearby seed source at some time. These longer lived understory trees represent the type that a particular stand will become if the stand remains undisturbed. The most common successional paths lead to balsam fir, northern hardwood, white pine and oak stands.

1 Relative volumes of species are derived from the USDA Forest Service Forest Inventory and Analysis Data, available at http://www.fia.fs.fed.us/tools-data.

Many wildlife species rely on aspen for at least a portion of their habitat requirements, including rare species such as the golden-winged warbler and game species such as ruffed grouse and deer. Aspen occupies much more acreage today than 200 years ago because of the cutting and burning that took place a century ago. Aspen acreage is now declining throughout much of the Great Lakes states because of natural succession. Michigan lost nearly a half-million acres of aspen forest type between 1980 and 2009. The desired amount of aspen is highly controversial.

Clearcutting is the primary harvest system employed to regenerate aspen stands because it is the only one that works. Sometimes only a few well-spaced healthy aspen trees in the mature stand are needed to regenerate aspen. Aggressive regeneration practices favor genetically superior clones. Areas with poor clones can be converted to other forest types. Historically, natural standregenerating disturbances often created large areas — sometimes several thousand acres — of evenaged aspen. Forest management at the landscape level attempts to create a mosaic of age classes and forest types that mimic the patchwork of types that would happen naturally.

Aspen sprouts best when the stand is harvested during the winter, when the bulk of stored reserves is underground and becomes available in the spring for new growth. Aspen should be clearcut before trees become over mature to help assure adequate vigor of the root system. The size and shape of the clearcuts are important. Landowners making small clearcuts — 10 acres or less — need to account for shade cast by any trees along the edge. This shade will have a negative impact on aspen regeneration.

The shape and size of clearcuts can be adjusted to special economic, ecological or visual conditions. Irregular shapes will produce a greater amount of forest edge, which will affect various species of wildlife in different ways. The irregular border is often visually appealing. Leaving islands and corridors within larger clearcuts will also mediate some of the initial visual impacts of a clearcut. Some trees, especially longer lived species, can be left inside a clearcut to provide a seed source for regeneration, food for wildlife and visual quality.

The objectives of nearby landowners can be an important factor in determining how a particular aspen ownership might be managed. Landowners with small parcels may be able to work with adjacent landowners on a common aspen management plan. A professional forester can help coordinate this sort of effort.

Gordon Gullion from the University of Minnesota wrote well-developed management guidelines for wildlife habitat, particularly ruffed grouse (sometimes called partridge). Small stands, about 10 acres, of variously aged aspen across the landscape are key too much of what he recommended. Of course, landowners have a variety of potential objectives. Other game species favoring aspen include whitetailed deer, woodcock, bear and snowshoe hare.

Depending on the soil type, a landowner might consider active conversion or natural succession of aspen to other forest types. A number of viable successional and management pathways are available, usually leading to balsam fir, maple, oak or pine types, and a variety of silvicultural practices can be used to change aspen stands to a different species mix. It is best to discuss this with a professional forester. 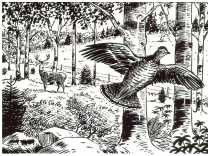 Aspen is a supermarket for insects, diseases and wildlife. This is part of the nature of aspen. A few of the more prominent damaging agents are forest tent caterpillar (Malacosoma disstria), large aspen tortrix (Choristoneura conflictana), Saperda borers (Saperda spp.), gypsy moth (Lymantria dispar), conks (Phellinus tremulae et al.), root rot (Armillaria mellea et al.), Hypoxylon canker (Hypoxylon mammatum), Cytospora canker (Cytospora chrysosperma) and Ceratocystis canker (Ceratocystis spp.). Many other insects and diseases affect aspen. Most of these are natural stand thinning agents. Defoliators (leaf eaters) such as forest tent caterpillar and gypsy moth seldom kill trees but do contribute to growth loss. Beaver, white-tailed deer and yellow-bellied sapsuckers are some of the common wildlife that feed on aspen. Small clear cuts may not regenerate in areas with high deer pressure, especially close to deer yarding areas. Deer tend not to stray far from a forest edge, so regeneration in the center of large clear cuts will be somewhat protected from deer browsing. Aspen along creeks are vulnerable to flooding and feeding by beaver. 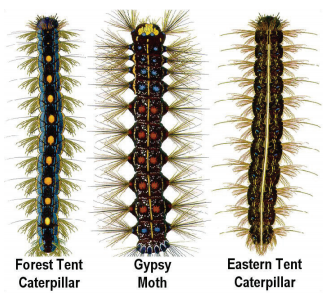 Woody Biomass for Energy in Michigan: So, You Want to Establish an Energy Plantation? (E3095)