Mesic conifers are softwood/evergreen tree species that grow on well-drained, reasonably fertile soils. “Mesic” refers to the middle area in a moisture spectrum from dry (xeric) to wet (hydric). White pine and hemlock are the trees usually identified in discussions of mesic conifers, particularly in terms of long-lived species. Sometimes other conifers are included, such as cedar, short-lived balsam fir and black spruce. The northern hardwood forest, the most common forest type in Michigan, once had a greater component of these mesic conifers. These trees provide valuable winter shelter for many resident songbirds and are of special importance to mammals such as white-tailed deer and martens. Though they were once commercially important, neither white pine nor hemlock now carry high monetary value. For ecological and habitat purposes, however, there is an interest in reestablishing these trees where they are absent or reduced. Forest owners with a broad interest in wildlife habitat improvement will attempt to restore these trees in hardwood stands.

The Trees and State Distribution

Both eastern white pine and eastern hemlock are in the top 10 most common trees in Michigan by total volume. White pine is fairly evenly distributed across the northern Lower Peninsula and the Upper Peninsula, but most of Michigan’s hemlock grows in the U.P., particularly the western U.P. (Table 1).

Eastern white pine was once the king of lumber interests. Large stocks of Great Lakes states white pine were harvested around a hundred years ago with little regard for the future. Subsequent rounds of wildfire eliminated white pine regeneration in many areas. Today, about a third of the Michigan white pine volume grows in the white pine/ hemlock forest types (Table 2). Most of the white pine volume is blended into other forest types, especially mixed upland hardwoods. Nearly half of the volume grows in the northern Lower Peninsula and almost as much in the Upper Peninsula. 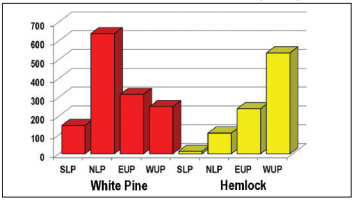 Table 2. Volume distribution of white pine and hemlock in representative forest types and other forest types

White pines are among Michigan’s tallest and largest trees, reaching heights that can exceed 150 feet. The needles are joined at the base in groups of five. Cones are 4 to 6 inches long. Bark on small trees is smooth and metallic gray. On larger trees, the bark is deeply furrowed.

Eastern hemlock was used less than white pine for construction lumber, although many barns and mine shafts used hemlock timbers. The bark was often more valuable than the lumber — the high tannic acid content was used to cure leather. Hemlock tends to prefer cool ravines and the north sides of steep hills. It also grows commonly on moist transition soils between upland and lowland sites. Most of the Michigan hemlock volume grows outside the white pine/hemlock forest type, with a large portion in the northern hardwoods forest type (Table 2). Fewer forest stands are dominated by hemlock today than 200 years ago. The western U.P. holds about 60 percent of Michigan’s hemlock volume, with a decreasing presence moving east and then down into the Lower Peninsula (Table 1).

Hemlock diameters rival those of white pine, but hemlock usually does not achieve the height of white pine. The needles are short and flat with two white lines running the length of the underside, and they are joined to the twig with a thin stem. Cones are small and roundish, maybe a half-inch in size. Bark on small trees is a flat gray without much texture. More mature bark is deep and furrowed and has a more reddish cast than that of white pine. Crowns tend to look quite lacy.

Both white pine and hemlock are good seeders. Seed germination is best on mineral soils with appropriate moisture and warmth. Hemlock seedlings are especially intolerant of drought. Silviculture that opens up the canopy to increase the amount of light reaching the ground and exposes mineral soil will increase seedling germination, seedling survival and successful growth of seedlings to large size classes, especially with white pine. Therefore, various selection and shelterwood silvicultural systems work well, especially with summer harvesting. Understory hemlock may not respond well to significant increases in light from heavy thinning, but white pine will be more successful with this type of thinning and release. Unfortunately, both white pine and hemlock are favorite deer browse, especially in late winter and early spring. Regions of Michigan with moderate to high deer pressure may experience recruitment failure due, in part, to seasonal deer browsing.

Group selection systems can be used to favor white pine and hemlock in northern hardwood and upland hardwood forest types (see Silvicultural Systems bulletin in this series) when mature white pine and hemlock are present in the stand. Many upland hardwood stands don’t have a mesic conifer component, however. In these cases, planting will be necessary to reintroduce these species, often after a harvest. In many situations, planted trees will need to be protected from deer and, sometimes, rabbits and hares. 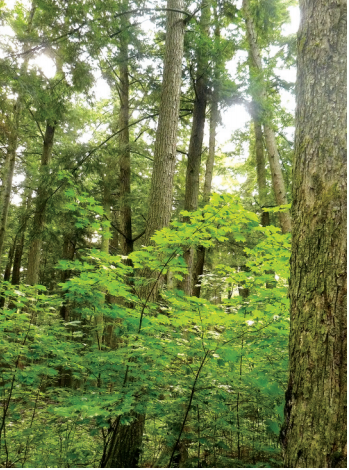 More common hemlock pests include the hemlock borer and yellow-bellied sapsuckers. The wood borer seldom attacks healthy trees, but trees stressed by drought or other factors can become susceptible. Sapsuckers create orderly rows and columns of holes from which sap exudes. These wounds allow wood-rotting fungi to enter and grow, which can lead to stem breakage. A pest to watch for is the hemlock woolly adelgid.1 Several Michigan introductions have been identified and successfully eradicated. This sucking insect has killed much of the hemlock in eastern states.

Habitat improvement and ecological restoration are primary reasons for forest owners to increase the amount of mesic conifers in upland hardwood stands. The main avian beneficiaries are migratory and resident songbirds that use the foliage for thermal cover, shelter from extreme weather and predators, nesting and feeding. These conifer crowns attract a variety of insects that birds will feed on. Additionally, mesic conifers in hardwoods provide a visual component that many forest owners enjoy, especially during the winter.