1Relative volumes of species are derived from the USDA Forest Service Forest Inventory and Analysis Data, available at www.fia.fs.fed.us/tools-data. 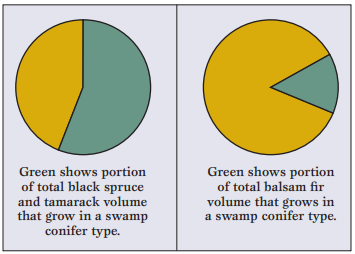 On wetter sites, growth can be remarkably slow. On better sites, growth can be quite good. Black spruce is a signature species of boreal forests, which are more common at latitudes north of Michigan. Black spruce, tamarack and balsam fir tend to grow very straight. Spruce and fir retain their newer needles year round. Tamarack loses all of its needles late in the fall. Both spruce and fir have narrow, pointy crowns, but fir tends to have more uniform density lower into the canopy. Tamarack is a lighter green, and crowns tend to be broader and more irregular. Each spruce and fir needle grows independently from the twig. Tamarack has clusters of needles erupting from a stubby spur branch. Black spruce is capable of layering — branches in contact with the soil can sprout roots and make new trees.

Swamp conifers cover about 1.1 million acres of Michigan’s 20 million-acre forest. Over 85 percent of the Michigan swamp conifer type grows in the Upper Peninsula.

Swamp conifer types are forested wetlands of several kinds. Where water flows, even slowly, understories tend to be dominated by brush, grasses and sedges. Where stands are fed only by groundwater, are perched above the average groundwater level and/or are acidic, bog mats of sphagnum and other mosses accumulate. Floating bogs mats can extend over water. On particularly infertile sites, stunted black spruce and tamarack might be over 100 years old. Interesting, rare or endangered bog flora can be found, such as pitcher plant, sundew, Labrador tea, leatherleaf and cottongrass. Many of these species are adapted to desert-like conditions, despite the saturated soil conditions of the swamps. 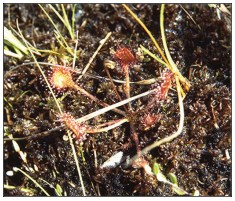 Average timber volumes are quite low — about half of statewide volumes — although some stands can be productive (30 cords per acre or more). Part of the definition of a forest comes from the ability of a site to produce a minimal amount of wood per acre per year. The U.S. Forest Service uses 20 cubic feet as the measure, which is about a quarter of a standard cord. Some of these swamp conifer stands would be classified as unproductive forest. Most stands were originated by wildfire and were evenaged. With more recent wildfire, some stands are becoming more multiaged as younger trees, mostly the more shade-tolerant black spruce, fill gaps created by dead and dying trees. These younger trees grow poorly, however, and would do better in full sunlight.2

Where conditions permit, clearcutting is the method to harvest and regenerate swamp conifers. Rotation lengths (years from regeneration to harvest) increase as site quality declines. Partial cutting may be financially unsound, and opened stands expose remaining trees to windthrow (blown over during higher wind events). Pulpwood is the main harvested product. Clearcutting can occur across an entire parcel at one time, or variations of strips and area cuts can be employed. Prescribed burning will help prepare seedbeds for optimum seed germination. Loss of certain stand components, such as mature tamarack to drought or balsam fir to spruce budworm, may make harvesting economically infeasible. Natural regeneration may already be present, and the dead and dying trees may provide desirable habitat aspects. If a harvest is feasible, winter harvesting when the ground is frozen will reduce site damage. (Wetland road and trail construction guidelines can be found in Michigan’s “Sustainable Soil and Water Quality Practices on Forest Land”3)

Swamp conifers support a wide range of wildlife species. The most notable may be the spruce grouse. Stands with recently killed conifers will attract arctic three-toed woodpeckers, which are somewhat uncommon in Michigan. In parts of the U.P., moose will browse regenerating stands with young willow. Some uncommon warblers, such as the Blackburnian, may be found in swamp conifers, along with the white-winged crossbill. Stands with dense overstories may serve as deer yards during severe winters. 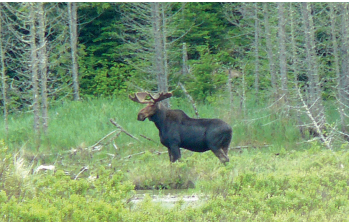