Swamp hardwoods are a combination of eight U.S. Forest Service forest types characterized by forested wetlands dominated by hardwood tree species. Site wetness and related access are important management factors. The role of emerald ash borer in stands with a lot of ash has been a relatively recent consideration. Sometimes these forests can be valuable for timber products, but, more commonly, their greater value lies in ecological services and wildlife habitat. 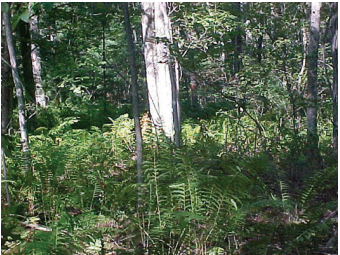 About 55 tree species make up swamp hardwood forests across Michigan. Red maple, green ash and silver maple account for over half the volume. Black ash, northern whitecedar, quaking aspen, balsam poplar, American elm, balsam fir and cotton-wood each make up 2 to 4 percent of the volume. Growth is often slow because of site limitations. Red maple, black ash and cedar are more dominant in the Upper Peninsula than in the Lower Peninsula.1

1 Relative volumes of species are derived from the USDA Forest Service Forest Inventory and Analysis Data, available at www.fia.fs.fed.us/tools-data.

Ash-dominated stands are among the first to lose their leaves in the fall and among the last to leaf out in the spring. Red maple dominated stands can be very colorful in the fall. Black ash tend to occupy the wettest sites, with green ash on sites intermediate between upland and lowland soils, and along waterways (riparian areas). White ash is not usually a component of swamp hardwood forests but rather a component of upland mixed hardwoods and northern hardwoods (see other bulletins in this series). 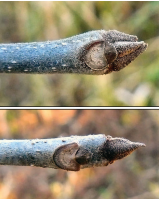 Small-diameter red maple has smooth bark. Leaves have toothed margins; sugar maple leaves have smooth margins. Buds on red maple are reddish purple. In the springtime, red flower clusters can appear in great numbers. Both maples and ashes are oppositely branched, where leaves and twigs attach to branches directly across from each other. Silver maple also has smooth bark at smaller diameters. Large trees often have long strips of bark peeling from the silvery-gray trunks. Leaves have deep sinuses between elongated lobes.

Green ash has rough bark broken into somewhat rectangular furrows. Leaves have six to nine stalked leaflets. Unlike black ash, the first set of side buds on green ash is close to the terminal bud. The tops of the leaf scars are straight across with no notch. Black ash bark sheds a lot of debris when rubbed and often has corky ridges. The leaves have seven to 11 leaflets without stalks. The first set of side buds is at least ¼ inch below the terminal bud. Leaf scars are slightly notched.

Swamp hardwoods cover about 2.4 million acres of forestland — about 15 percent of the Michigan forest. Distribution is fairly uniform across the state, but swamp hardwoods occupy a disproportionately high percentage of the southern Lower Peninsula forest. There, most of the upland forest has been replaced by agricultural land uses. Swamp hardwoods may occur along rivers and bottomlands as well as in swamplands.

Varying hydrological characteristics are critical to differences among swamp hardwood stands. The river bottomlands and floodplains of southern Michigan don’t resemble the black ash swamps of the western Upper Peninsula. Stands dominated by balsam poplar and quaking aspen mixes are another common variant across northern Michigan. Peats and mucks will be less productive than better drained mineral soils. Some of the poorest sites, mostly in the Upper Peninsula, are commonly nearpure stands of black ash.

Stand volumes statewide are below average, though some stands can be quite productive and wellstocked. Stocking and productivity are low on wetter sites. Many of these stands provide important hydrological functions typical of wetlands.

Stands dominated by ash species are threatened by the emerald ash borer. Loss of ash in these swamps may result in conversion to a non-forested condition. Lowered transpiration rates may cause moisture levels to be greater than they would otherwise be. The loss of vertical structure will strongly affect wildlife habitat conditions.

Good quality sites with well-stocked stands can be managed for high quality timber. Many of these stands have been high-graded over time, however, resulting in stands of low timber quality.

Depending on site conditions and forest overstory, rich understories can develop in swamp hardwood stands. Understories can include attractive species such as certain wildflowers (e.g., cardinal flower) and many ferns (e.g., cinnamon and ostrich fern). Marsh marigolds are among the earliest of spring blooms.

On poor sites, timber management may not be financially feasible. Wildlife habitat and watershed quality objectives may dominate. Poor sites dominated by black ash and threatened by emerald ash borer may convert to lowland brush and/or wetland grasses and sedges.

Stands dominated by quaking aspen and balmof-Gilead will be best reproduced through clearcutting, although balm can tolerate higher amounts of shade than aspen, even though they are in the same genus. Forest owners may consider natural succession to other tree species where the opportunity exists, though quaking aspen, even on less than optimal sites, may be desirable for game species habitat. Clearcutting can also be used in stands of red maple, silver maple and green ash to stimulate stump sprouts.

The emerald ash borer (EAB) is the greatest threat to swamp hardwood types with significant proportions of ash species. EAB is not uniformly spread around the state, so it’s important to know how far EAB is located from a managed ash woodland. Dutch elm disease continues to affect all native elm species. Beaver can cause significant direct damage to ash and aspen. Beaver dams can flood and kill swamp hardwood stands. Placement of roads and alterations to drainage should be carefully considered — changes in water levels can cause growth loss and mortality among trees.

Swamp hardwoods will often support a wide range of wildlife — at least 89 vertebrate species,3 including game species. Seasonally flooded sites with temporary ponds (vernal pools) support many amphibian species and attract many terrestrial species. Swamp hardwoods with berry-producing species such as winterberry, spicebush and viburnums will attract wildlife. Stands with greater structural diversity will likely have a greater number of wildlife species. Some swamp hardwood sites, especially those dominated by black ash, may lose their forested condition because of emerald ash borer. 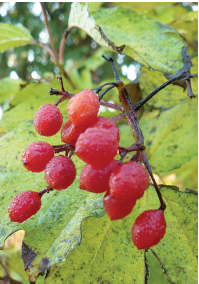